Recovery is going to be relatively slower and not V-shaped: Hugh Young

Hugh Young feels the market tends to be swinging from being a very risk aversion thinking the end of world.

The markets globally have taken a huge beating since the last week of February due to rising concerns over the wide-spreading novel coronavirus, or COVID-19, in major parts of the world. In fact, the virus has forced developed as well as emerging nations to lock down their countries.

As a result, economies came to a standstill which raised fears over global growth and corporate earnings. Many experts have been predicting a recession.

In addition, a lot of companies have started making provisions for likely losses in the coming quarters while some deferred their guidance on account of expected uncertainty due to lockdown.

"We want to see the long-term effects of this virus on the economy. Recovery is going to be a relatively slow one and not going to be V-shaped. I am not sure the market has accurately priced in this event," Hugh Young, head of Asia Pacific of Aberdeen Standard Investments told CNBC-TV18.

Indian equity benchmarks fell 38 percent till March 23 from its record highs seen in January, but then recovered 21 percent from those March lows to trade rangebound in the last couple of weeks. 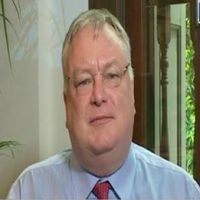 The market seems to be supported by lower crude oil prices, hopes of big stimulus package to revive economy, global liquidity support by central banks etc, though virus cases are not showing any signs of major decline or flattening worldwide.

More than 27 lakh people are infected by this virus with more than 1.9 lakh deaths worldwide, as per the data compiled by Johns Hopkins University.

Hugh Young feels the banking sector in India is the real issue.

"There are far too many banks which lack practicses but HDFC Bank was the standout, best in class with stricter and proper rules and regulations, in fact nationalistic about its in place and investment in leading companies," he said, adding there are too much stricter rules which should be relaxed.

Most of other experts feel the banking and financials space is likely to see NPA issues if the lockdown extends further as a lot of small and medium companies if they borrowed money could find it tough to survive in this kind of situation though the RBI has given moratorium.

Nifty Bank itself was one of the biggest losers in this fall, so far losing more than 35 percent in last more than two-month period.

Disclaimer: The views and investment tips expressed by investment expert on Moneycontrol.com are his own and not that of the website or its management. Moneycontrol.com advises users to check with certified experts before taking any investment decisions.
Moneycontrol News
TAGS: #FII View #MARKET OUTLOOK #Nifty #Sensex
first published: Apr 24, 2020 01:29 pm