Real estate standing tall with index rising 17% in 3 weeks. What to expect going ahead?

Investors with a higher appetite for risk should only venture in this sector given that it is cyclical and the companies do carry some amount of leverage, said an expert

Real estate turned out to be the best performing sector in the last three weeks as the Nifty Realty index rallied more than 17 percent.

It was the worst affected sector since March 2021 when the cases started rising upwards forcing the state governments to impose lockdowns. The index had fallen more than 17 percent during March 4, 2021 to May 14, 2021.

Indiabulls Real Estate was the biggest gainer amongst them with more than 23 percent rally, followed by DLF, Godrej Properties, Oberoi Realty, Sobha, and Phoenix Mills that gained 11-16 percent each in three weeks. Brigade Enterprises, Sunteck Realty, Mahindra Lifespace Developers, and Prestige Estates Projects were up 2-9 percent each in the same period.

Declining number of daily Covid cases, hopes of opening of economy soon and stimulus talk boosted the sentiment among investors.

The daily new Covid cases in India peaked around 4 lakh in early May and have now fallen to around 1.3 lakh cases per day.

"The real estate sector has been one of the worst affected due to the ongoing restrictions announced in several states. However, signs of peaking of cases have increased hopes of easing restrictions and return of normalcy in demand for real estate," Ajit Mishra, VP - Research at Religare Broking told Moneycontrol.

"The result season surprised many as strong Q4 numbers along with robust bookings and realisations attracted inflows. Another driver is the low interest rate environment which allowed for cheaper housing loans, further prompting buyers to prefer not to delay buying properties at current rates," said Nirali Shah, Head of Equity Research at Samco Securities. 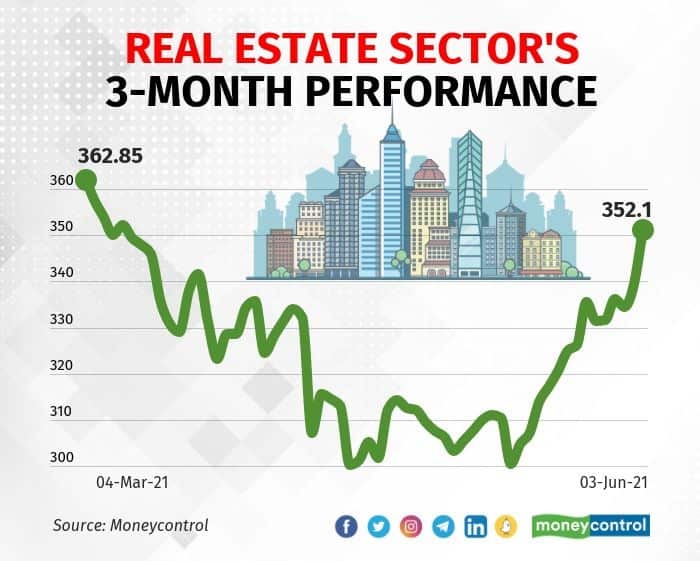 The real estate remains an important segment for the economic growth. The sector not only contributes 7-8 percent to India's GDP but more than 5 crore of India's labourers depend on construction for their living.

After the first wave, residential real estate recovery picked up as seen in the previous two quarters. The rising demand went well above estimates. Housing demand in the COVID-19 era has been influenced by several variables. Many new first-time homebuyers are on the market, and many existing homeowners want to upgrade to larger homes so that they can comfortably work from home.

"Improved affordability and continued work-from-home are likely to raise demand for residences by an average of 5-10 percent (in terms of area) in India's top six cities this financial year. Absolute demand, on the other hand, will not catch up to pre-pandemic levels until fiscal 2023. Hence, there is a rally which happened in the real estate stocks," said Gaurav Garg, Head of Research at CapitalVia Global Research.

What Should Investors Do Now?

Experts expect the demand to improve in the real estate segment going ahead but advised to be selective in the space and only high risk investors can prefer this segment. Only 4 stocks are on their radar for investment.

Nirali Shah of Samco Securities feels among stocks, Oberoi Realty is one of the relatively safer bets. "However, investors with a higher appetite for risk should only venture in this sector given that it is cyclical and the companies do carry some amount of leverage," she said.

"Godrej Properties may have an advantage over other stocks. The firm focuses on constructing residential, commercial, retail, and information technology developments in India's major cities. Residential, townships, commercial complexes, office spaces, business centers, IT Parks, and technology parks are the emphasis of their operations," he explained.

"India's biggest developer of residential & commercial real estate, Lodha Developers saw increased demand in the premium and luxury residential segment. With a well-established brand value and diversified portfolio in both residential and commercial sectors, the company may be a good bet in the long term," Garg said.

Disclaimer: The views and investment tips expressed by investment expert on Moneycontrol.com are his own and not that of the website or its management. Moneycontrol.com advises users to check with certified experts before taking any investment decisions.
Sunil Shankar Matkar
Tags: #Market Edge #Stocks Views
first published: Jun 5, 2021 10:40 am