Interestingly, in the current quarter, companies such as MRF, Arvind Fashion, and DCM Shriram had bought back their pledged shares completely

Indian benchmark index Sensex has bounced back nearly 18 percent from its March 2020 lows. In March, equity market saw a heavy sell-off which took index down nearly 32 percent. This led to stock price erosion of companies where promoters have pledged shares.

As of March 2020 quarter, there were 106 companies among BSE 500 index whose promoters had pledged shares. Out of 106 firms, 44 saw a rise in promoters' holdings being pledged, while 25 witnessed a fall in promoter pledged holdings compared to the previous quarter.

Interestingly, in the current quarter, companies such as MRF, Arvind Fashion, and DCM Shriram had bought back their pledged shares completely. Top 10 companies where promoters increased pledged shares: Max Financial Services, Future Retail, Adani Ports have seen a rise if over 20 percent in share pledge holding. Max Financial Services topped the list with 23 percent, as in December 2019 quarter pledge share to total held was 71.54 percent and in March 2020 it rises up to 94.76 percent. 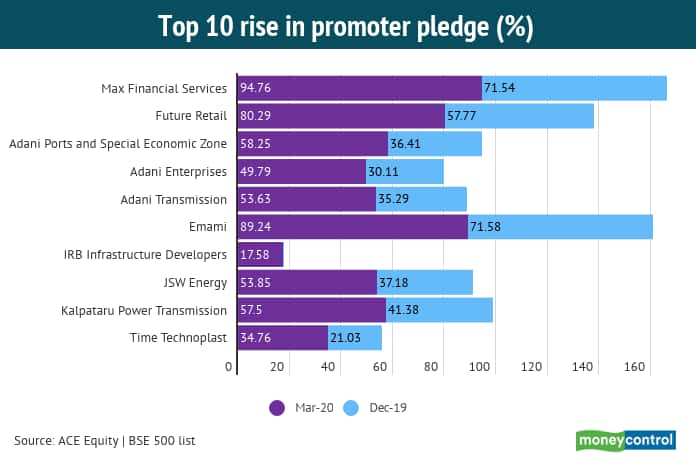 Top 10 companies where promoters reduced the pledged shares: As compared to the December quarter, Apollo Hospitals Enterprise and Reliance Power have seen a decline in pledge holding of 30.67 percent and 23.08 percent respectively. Apollo Hospitals Enterprise in December 2019 quarter pledge share to total held was 67.33 percent and in March 2020 it reduces to 36.66 percent. Pledging of shares is common in companies where promoter holding is high. Promoters take loans against their holding in their companies from various financial institutions, wherein ownership is retained by promoters. Pledging of shares to raise finances for the operations of the company is not a bad practice per se. But, in a volatile market or muted demand scenario, stock prices of the companies may start falling.