The list is populated by companies that have been in the news recently for all the wrong reasons. High pledged shares, mounting debt, defaults and bad management practices have marred these stocks, resulting in losses for investors

Evidently, the list is populated by companies that have been in the news recently for all the wrong reasons. High pledged shares, mounting debt, defaults and bad management practices have marred these stocks, resulting in losses for investors.

Experts suggest avoiding stocks that are riddled with structural problems. “Despite the Indian benchmark indices trading near record highs, the companies mentioned above have their fair share of problems. The whole ADAG group and JP Associates has been under pressure due to dismal financial performance and elevated debt levels,” Jayant Manglik, President - Retail Distribution, Religare Broking Ltd told Moneycontrol.

Table: In the January-June period, 297 BSE500 stocks gave negative returns. The table below lists stocks that fell more than 50 percent. Data as of June 18. 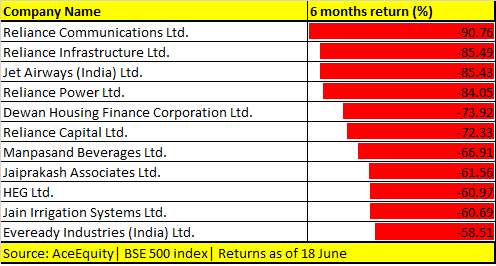 “Further, Vodafone Idea has been consistently losing market in the fiercely competitive telecom industry that has led to the stock’s underperformance. While corporate governance issues and the resignation of the auditor has dragged Manpasand Beverages to record lows; Jet Airway’s inability to sustain its operations, elevated debt levels and lack of potential buyer have led to the collapse of Jet Airways,” he said.

For those who are already invested in these stocks, Manglik said it would be prudent to book losses and look for companies that have strong fundamentals, healthy balance sheet and better growth prospects.

The broader market has suffered heavily in H1CY19 on D-Street. Most of the stocks in the broader market are in a downtrend due to varied business challenges. Unless a meaningful change in the business cycle occurs, one should refrain from hunting for bargains, suggest experts.

From a technical point of view, a proper price reversal means a bare minimum higher top and a higher bottom on the weekly timeframe.

“Just because companies have fallen 70-90 percent does not make them attractive, there is no point investing or holding such losers,” Umesh Mehta, Head of Research, SAMCO Securities told Moneycontrol.

“It is better to sell and shift to quality stocks. Any stock falling beyond 75 percent from the top, historically, should be a no for investments,” he said.

This is the second instalment of the six-part half-yearly review series. You can read the first part here.