Over the next 3-4 months, the discretionary segment could clock about 13-17 percent growth, with the staples segment offering a steady 7-9 percent growth, Gopal Kavalireddi of FYERS says in an interview to Moneycontrol.

He says with a good monsoon (7 percent above long period average), a rise in manufacturing capacity utilisation (75 percent), and higher credit growth (16.2 percent), the current festive demand is expected to bolster the earnings of many companies.

The Head of Research at FYERS believes once the current headwinds dissipate, aided by private investment and strong consumption trends, India Inc has the potential to deliver excellent earnings growth and healthy returns for investors in the latter part of CY23.

Kavalireddi has 20 years of professional experience from various backgrounds, working with the US Department of Energy, Thermax Global and Siemens Gamesa.

Do you see any possibility of the market reporting double-digit returns by next Diwali?

Over the last 22 calendar years, despite a dot-com bubble, a global financial crisis, periods of low earnings growth, and a serious health pandemic, Nifty delivered 16 percent average returns, which included 5 years of negative returns and 8 years of less-than-average returns. CY22, as expected, is shaping up to be a year of price and time consolidation for Indian stock markets. This flat performance is much better, relative to the large negative returns from many global indices. The prevailing geopolitical tensions, economic uncertainty, high inflationary trends and interest rate hikes by most central banks are expected to continue into the next calendar year and could impact the earnings growth for a quarter or two.

Once these headwinds dissipate, aided by private investment and strong consumption trends, India Inc has the potential to deliver excellent earnings growth and healthy returns for investors in the latter part of CY23.

Most of the experts globally have ruled out the possibility of severe recession in western nations. Are you in the same camp?

The incessant liquidity provided during the pandemic times resulted in an extravagant upsurge in all asset and commodity prices, giving rise to persistent inflation. This necessitated the need for reversing the benign interest rate cycle, which is currently impacting the economic growth of most nations across the globe. This was inevitable, and essential in controlling the spiralling inflation, which touched a multi-decadal high in the western world.

While the bearing on growth is definitive, certain economic indicators are exhibiting resilience, prompting the US Federal Reserve to continue on its chosen path of large interest rate hikes.

The dollar index is hovering in the 110-115 range, at a two-decade high, with US 10-year and 30-year yields around 4 percent, while the 5-year yield stands at 4.22 percent. After the last Fed meeting, clarity emerged on a further 125 basis points hike in interest rates before the end of CY2022. The terminal repo rate in the US could reach 4.5 ± 0.25 percent based on current market pricing, before cooling down into a more stable zone.

Most global agencies and financial institutions have downgraded the GDP growth of many economies for CY2023, and expect a recovery only in 2024. The International Monetary Fund (IMF) has indicated a GDP growth of 1.6 percent in 2022, and 1 percent in 2023 for the US.

Consumer price inflation in the US is expected to peak at 9.5 percent in the third quarter of 2022, declining to 4.7 percent by the fourth quarter of 2023. Coinciding with the end of the interest rate cycle, possible subsiding of geopolitical tensions and improving output & global trade, economies could return to a growth path in 2024.

Do you expect the US dollar to strengthen further in the coming weeks and will that bring the rupee down to 85 levels?

With the US Fed's clear intention of raising the interest rates by another 125 basis points before the end of the year, there is a high possibility of DXY spurting above the 115 mark temporarily. As a large part of rate hikes are done, the strong move in DXY could be stalling, and can head back to levels of 110 and lower in the coming months.

With the dollar getting stronger and stronger since the beginning of 2022, most global currencies have depreciated, albeit to varying degrees. In the last one year, the Indian rupee has depreciated considerably, from the level of 74 to 83 per dollar. In terms of percentages, the rupee has depreciated by 2.97 percent in 1 month, and 10.51 percent year-to-date, against the dollar.

The Reserve Bank of India, though not mandated to arrest the fall or rise of the rupee, has been intervening in the forex market to reduce the volatility. The Indian forex reserves, which were closer to $650 billion last year, have been reduced to $532 billion by September 30, 2022.

RBI Governor in his recent policy briefing stressed that 67 percent of this reduction in forex reserves was due to revaluation, and only the balance was due to intervention in currency markets.

Also, from the beginning of the current financial year till October 15, foreign institutional investors sold Rs 1.66 lakh crore of equities. This could have exacerbated the rupee depreciation, if not for the domestic investors and retail countering it with a buy of Rs 1.56 lakh crore.

If present conditions continue to prevail for some more time, the possibility of the rupee getting closer to 85 to the dollar is plausible but the timely intervention of the Indian central bank could moderate the pace of the fall.

Are you cautious about the staples and discretionary segments?

In the post-Covid-19 era, despite high and persisting inflation, Indian consumers continue to exhibit optimism, with spending patterns stabilising across essential categories and rising across discretionary segments.

With a good monsoon (7 percent above long period average), a rise in manufacturing capacity utilization (about 75 percent), and higher credit growth (16.2 percent), the current festive demand is expected to bolster the earnings of many companies. These are positive signs for firms expecting to clock record sales after a two-year hiatus in consumer spending due to the Covid impact.

In addition, with prices of commodities retreating from their recent highs, companies could offer temporary discounts or introduce price cuts to raise volume growth.

The Confederation of All India Traders (CAIT) estimates over 2.5 million weddings in just one month, starting November 14, accounting for Rs 3 lakh crore of flows into the wedding business. This would mean brisk sales for companies across hotels, logistics, jewellery, food, clothing & beverage, along with high demand for personal care and event management service providers, among others.

Over the next 3-4 months, the discretionary segment could clock about 13-17 percent growth, with the staples segment offering a steady 7-9 percent growth.

What are the biggest headwinds, except inflation, for the equity market in the coming six months?

At this point, uncertainty in India's economic growth can be consigned to global headwinds and not domestic factors. In CY22, more than 90 nations across the world hiked interest rates in large measures, a historic and collective move, in an attempt to tame the inflationary pressure on their respective economies. This influenced imports and exports, supply chains, productivity and wage costs, in turn, hampering demand growth.

Inflation print impacts the interest rate decision, thereby affecting domestic consumption and demand growth. In India, from the current repo rate of 5.9 percent, there exists a possibility of a 100bps increase by the Monetary Policy Committee, over the next two meetings before the end of FY23. The inflationary expectation for FY23 by RBI is projected at 6.7 percent, with FY23 real GDP growth estimated at 7 percent.

The biggest gainer since last Diwali was the power sector, up 35 percent. Do you expect a similar kind of run-up to continue by next Diwali too? 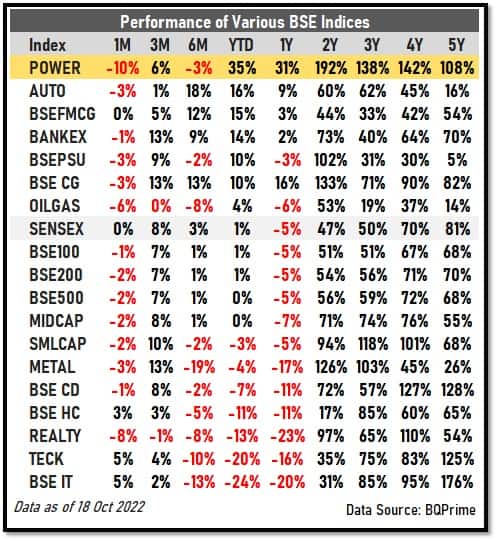 A closer look at the 11 constituents of the S&P BSE Power Index shows that, during the same period, the three Adani Group companies – Adani Power (P/BV of 38.5), Adani Transmission (P/BV of 52), Adani Green Energy (P/BV of 283), ABB India (P/BV of 15.6) delivered tremendous outperformance, while returns from NHPC and NTPC were around the index mark. Power Grid Corporation of India, Tata Power and Torrent Power were the notable underperformers. 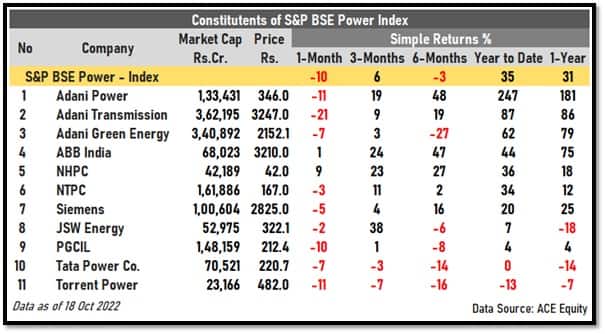 The short-term performances were subdued, possibly due to sector rotation and profit booking by traders and investors. Expecting a similar performance, by next Diwali, from a few of these richly valued companies could be difficult but not impossible.

With substantial demand for power in India, for both conventional and renewable energy, new projects are being unveiled at a decent pace.

In the coming years, fresh capex in thermal capacity, the rise of renewable energy as a larger contributor in the generation mix, green hydrogen adoption and commercialisation, along with upgradation and enhancement of transmission & distribution networks, would be the key factors presenting a facelift to the power sector in India.

Disclaimer: The views and investment tips expressed by investment experts on Moneycontrol.com are their own and not those of the website or its management. Moneycontrol.com advises users to check with certified experts before taking any investment decisions.
Sunil Shankar Matkar
Tags: #Daily Voice #MARKET OUTLOOK #Nifty #Sensex
first published: Oct 20, 2022 11:23 am