We think that the Snowflake allocation is from either of his portfolio managers, Todd Combs and Ted Weschler, who each manages about $14 billion in assets. We think it is more likely Todd Combs.

Warren Buffett at 90 is learning about the modern supernormal companies and how to adjust the financial statements to reflect true economics. These are being applied to the large-cap technology companies, Dr. Vikas V Gupta, CEO & Chief Investment Strategist, OmniScience Capital, said in an interview with Moneycontrol’s Kshitij Anand.

Q) US Fed plans to keep interest rates low for a long time. What is the kind of impact it will have on emerging markets like India as well as the currency?

A) The cost of capital across the world is linked to the US Fed rate and definitely for the US-based investors. The FII and FDI absolute return requirements from investments in emerging markets like India reduce when the Fed rate is low.

Since it is planned by the Fed to be low for several years, long-term allocations to emerging markets like India become feasible even at relatively lower return hurdles. 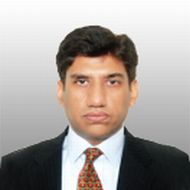 Emerging market currency in the near-term would appreciate but in the longer term, it will depreciate related to the inflation differential and productivity differential.  INR should continue depreciating on a long-term basis.

Q)  Warren Buffett, the man who pioneered buy and hold investing, just made quite a fast billion bucks from a type of investment he once mocked. Shares of Snowflake surged 111% to about $253.93 at its market debut on Wednesday, pushing Berkshire’s stake to about $1.55 billion from around $730 mn. It looks like value investing is also changing with time and Warren Buffett is leading it even at the age of 90. What are your views?

A) We think that the Snowflake allocation is from either of his portfolio managers, Todd Combs and Ted Weschler, who each manages about $14 billion in assets. We think it is more likely Todd Combs. This is not new. Charlie Munger has been allocating tiny amounts to companies that don’t fit the classic value investing framework. Todd has allocated earlier to Paytm as well. Todd or Ted has also allocated to Amazon and was also instrumental in making the case for Apple. However, Apple was a classic value investing play from 2015 onwards.

Amazon is a modern value play if one understands how to account for the intangible assets that it creates and adjust the income statement to get a view on the discretionary cash flows. Adjusting for the discretionary free cash flows that Amazon generates, it becomes a modern value investing play at certain prices which might still look like high PE and overvalued without the adjustments.

So, Buffett at 90 is learning about the modern supernormal companies and how to adjust the financial statements to reflect true economics. These are being applied to the large-cap technology companies. But for the Snowflake and Paytm investments, it is probably a tiny allocation in Todd Combs portfolio which is open for interesting startup-like, early-stage investments inspired by Charlie Munger.

Q) It looks like it is raining IPOs - we saw bumper responses for both Route Mobile as well as Happiest Minds. There are many more IPOs lined up such as Angel Broking, CAMS etc. Does it look like the lull of IPOs is ending? What are your views? Any IPO which you are particularly excited about?

A) Yes, clearly the IPO demand shows that the market is hungry for more companies. Probably, it indicates that investors need to dig deeper in the market beyond the popular companies.

We as Scientific Investors, typically, are not keen on allocating during the IPO but would rather wait for the issue to the season for a few quarters and discover its true fundamentals and stable market valuations.

At that point, if we see a significant discrepancy between the market perception and fundamentals we will start allocating to the company.

Q)  Market seems to be walking on a tight rose as geopolitical concerns as well as COVID-19 cases are not coming down, but yes there is some hope of a vaccine but that too is still some months away. Are we nearing the peak – we could have a touch and go moment with 12K and then fall?

A) The US elections is likely to create some volatility around the election results, but by now the market has digested both outcomes of either a Trump win or a Biden win. The market seems ok even with a Biden win.

A sustained and significant downside from the results looks unlikely with either result. As far as the India-China situation at the border, it looks like there won’t be a full-scale war, but tensions would continue.

This will increase costs to India but might also help the economy due to higher Government/Defence spending. The US-China trade war is also likely to continue with India being a preferred alternative production destination compared to China.

On the vaccine front, it seems to be taking time, but the economy has been opened up and is likely to be growing with pent-up demand in FY22 and FY23 with higher-than-normal growth rates.

Given all this, the equities market could continue appreciating on the back of higher revenues and earnings for the next two years. We are not technical analysts, so don’t know about Nifty 12K, but it probably is a magic number where there could be some volatility.

We would use that as an entry point for new allocations and top-ups. In our opinion, an index investment to an ETF or large-cap funds would be allocating to overvalued securities and hence should be avoided.

However, a well-selected portfolio of supernormal companies, i.e. companies with supernormal profitability, at supernormal prices, i.e. at discount to intrinsic value, would be a good allocation.

Q) One space that will still remain popular even if Sensex, and Nifty falls and that would be small & midcaps. Do you think the smart money or has it already started rotating towards quality small & midcaps? Any stocks that are on your radar?

A) Yes, exactly the point we were making just now. That a well-selected portfolio from the broader markets, i.e. mid and small caps would make a lot of sense from a long-term perspective.

Yes, we think the smart money has already started rotating to quality small and midcaps. Some of the stocks that we are allocating to—and this is NOT a recommendation—are from the railways, such as, RVNL, RITES, IRCON; from Defense, such as, Cochin Shipyard, Bharat Electronics, Bharat Dynamics; from financial services, such as, CARE ratings, BSE ltd., and IT companies such as, LTTS, Zensar Technologies etc.

Q) The 50% rally in the Sensex, and Nifty was largely led by roughly 10 stocks while the rest of the market suffered and that is why there was no jubilation among the investment community. Now, when the tide reverses could these stocks face selling pressure and investors should at best book profits? What are your views?

A) We would definitely take a very hard look at the top 10-20 stocks from Nifty which have performed well over the last 1+year or more. If one has them in their portfolio one should look at the fundamentals vs the valuations and estimate their expected returns.

In our opinion, the discount rate is used to value these companies is probably 10%-12% at max. So that is the best case return if the optimistic cash flow projections of the analysts for these companies over next 10-20 years come true.

If anything goes wrong and is a little bit lesser than these projections, it is likely that there will be a share price collapse. So one should definitely consider booking profits when the going is good. But that depends on each person’s analysis as I have suggested.

Q) So we keep on talking about quality small & midcaps. How do you define quality?

A) We look for companies that are SuperNormal, i.e. these are companies making supernormal profits. This is an economic term which signifies that the return on capital (ROC) of these companies are much higher than the cost of capital (COC).

The reason they are able to continue making high ROC is some form of persistent competitive advantage that they enjoy.

These companies have some kind of an important position in their ecosystem due to which they are able to corner a higher profit pool from the ecosystem compared to their capital investment share in the ecosystem. That is what would be a perfect definition of quality.