172@29@17@241!~!172@29@0@53!~!|news|business|markets|covid-19-dip-in-discount-rate-may-deflate-the-current-bull-market-icici-securities-5811301.html!~!news|moneycontrol|com!~!|controller|infinite_scroll_article.php!~!is_mobile=false
Subscribe to PRO at just Rs.33 per month. Use code SUPERPRO
you are here: HomeNewsBusinessMarkets

ICICI Securities highlighted that the dip in India’s Rf (10-year bond yield) during the COVID episode is much lower compared to the US.

A sharp dip in forward earnings growth amid COVID-19 and marginal dip in the discount rate will provide headwinds to the current bull market rally in Indian stocks as valuations rise above +1SD (standard deviation) on rolled forward P/E basis, said a report from ICICI Securities.

The brokerage hinted that further drop in India's discount rate is warranted for the bull rally to sustain.

The brokerage said its 1-year forward target for the Nifty50 remains at 11,700.

The brokerage pointed out that a key argument for the current rally in global equities is that the ‘discount rate’ has dipped sharply due to the unprecedented accommodative stance of global central banks in response to the pandemic, which has brought down the Rf (risk-free rate) while rising risk appetite is reducing the ERP (equity risk premium).

In plain terms, the discount rate is the percentage of return one seeks as an investor.

ICICI Securities highlighted that the dip in India’s Rf (10-year bond yield) during the COVID episode is much lower compared to the US. 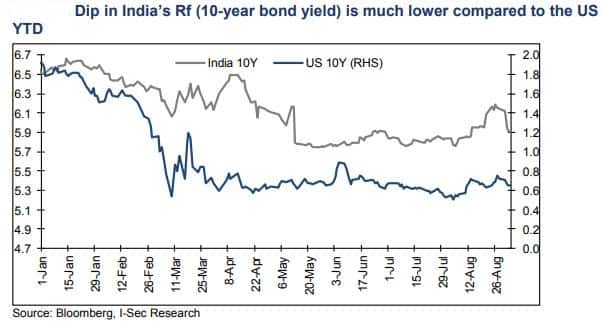 RBI has cut policy repo rates by 140 bps and CRR by 100 bps year-to-date (YTD) while unveiling additional liquidity measures (including LTRO for helping transmission of rates and operation twist for lowering the term premium).

YTD, as per ICICI Securities, these measures have resulted in a sharper dip in yields at the shorter end (a dip of nearly 200 bps in less than 1-year G-Sec yields), but the measure of Rf (10-year bond) has dipped marginally by 50 bps to nearly 6 percent.

Post Global Financial Crisis (GFC), the drop in India’s 10-year bond yield was nearly 400 bps in the second half of the year 2008, ICICI said.

Higher inflation and an increase in fiscal deficit outlook have underpinned the 10-year bond yield in staying higher.

"Sticky CPI inflation at nearly 6.5 percent and a sharp increase in fiscal deficit outlook have resulted in the 10-year bond yield remaining relatively high despite the rate cuts and liquidity measures by RBI. Inflation, as measured by WPI, is currently is sharply lower as it was post-GFC when it represented the headline inflation number instead of the CPI post-2012," ICICI Securities said.

"YTD, the indicators of country risk premium have not dipped with India’s CDS (credit default swap) spread over the US higher by nearly 20bps at 1.43 percent," said the brokerage.

However, the brokerage underscored that some of the gains on Rf offset by the rise in indicators of the country risk premium for India.