Of the 26 stocks in his portfolio that have declared their shareholding data as of April 24, Kacholia kept his stake constant in 11 companies

Renowned investor Ashish Kacholia booked profit in 5 socks and increased stake in 6 stocks in the March quarter, according to the company's shareholding data as of April 24.

Kacholia may have exited or reduced stake to less than a percent in as many as three stocks - KEI Industries, Parag Milk and Time Technoplast. 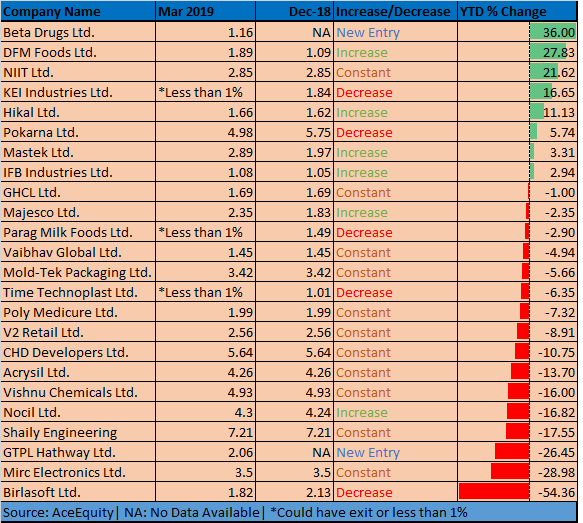 Note: Shareholding data of 26 companies in which Ashish Kacholia, or persons acting in concert, held more than one percent stake is disclosed on the BSE.

The broader market has been under pressure since last year. And, that could be one reason why we see nearly 70 percent of the stocks in Kacholia’s portfolio giving negative returns in 2019.

He increased stake in as many as six companies for the quarter ended March — DFM Foods, Hikal, Mastek, IFB Industries, Majesco and Nocil.

He added two firms to his portfolio (where stake is more than 1 percent) – Beta Drugs and GTPL Hathway.

Beta Drugs is a dedicated world leader in oncology. The company is a global leader in the development of enabling products, scientific knowledge, and technical expertise within a wide range of applications.

GTPL Hathway is the largest multi-system operator in Gujarat with a 67 percent share of the Cable TV market and is the second largest player in the cable market of Kolkata and Howrah with a 24 percent market share. The stock has been under pressure so far this year, down by about 26 percent.

Of the 26 stocks in his portfolio that have declared their shareholding data as of April 24, Kacholia kept his stake constant in 11 companies. The names include NIIT, GHCL, Vaibhav Global, Mold-Tek, V2 Retail and Mirc Electronics.