10-year data support bulls in October. Will the momentum continue this time?

In the last 10 years, the markets have ended in the green in eight Octobers. FIIs have been net buyers most Octobers. Both FIIs and MFs were net buyers four times. In 2021, Q2 corporate earnings, US bond rates and crude oil price will be the key factors to watch out for, say experts.

In the last 10 years, bulls have outperformed bears in eight Octobers, though for different reasons, say market experts.

In October 2020, the market a saw strong recovery (up 3.5 percent), after a fall in September (down 1.4 percent), aided by the recovery in earnings, positive economic data, low interest- rate environment and ample liquidity.

"October is also the most volatile month and the most feared one. Many of the financial market sell-offs have happened or have begun in October," Jay Prakash Gupta, Founder, Dhan, explains.

Since it’s month of volatility, October provides an opportunity for FIIs and MFs to grab stocks at a bargain.

Going ahead, rising crude oil prices, higher inflation numbers, Q2 corporate earnings, RBI’s monetary policy, and concerns related to the US debt crisis could be some of the key triggers, he said. 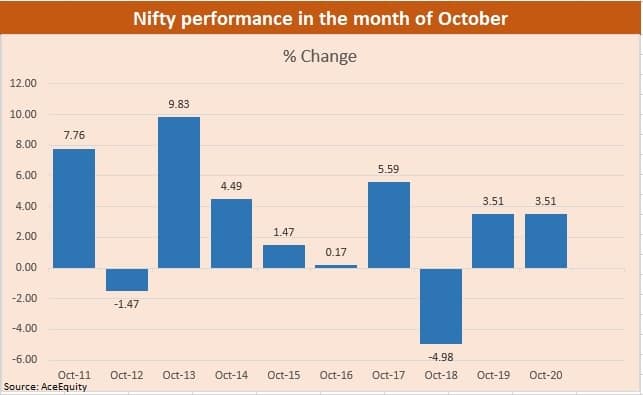 How FIIs, MFs behave in October

“History suggests that FIIs were net buyers most Octobers. In the last 10 Octobers, the market ended in the red only twice,” says Ankit Yadav, Wealth Manager (USA), and Director, Market Maestroo. He agreed that October is also a month of volatility.

US bond yields a key factor this time

In 2021, bond rates will play a role, Yadav said. “If bond rates continue to show momentum, FIIs and MFs will slow down their pace of buying. If bond rates start decreasing, they will increase their positions in the market, and we can witness more inflows," he said.

Since September 23 till today, the US bond yields have increased from the 1.30 to the 1.51 levels. The Federal Reserve is expected to start tapering of bond purchases in November 2021 and plans to finish it by mid-2022. Concerns over persistent inflation also aided the increase in US bond yields.

Tridib Pathak, Co-head of Equity, Ocean Dial Asset Management India and Fund Manager at Avendus Olivo, said: "Unlike the taper tantrum period of 2013, India is in a much better situation now due to our vastly improved macroeconomic stability. Our vulnerability has reduced substantially. In 2013, inflation was in the range of 8-10 percent. Now, it is lower at 5-6 percent."

"Also, our current deficit is expected to be lower now, around 1 percent, compared to a very high level of around 4.5 percent in 2013. Our forex reserves - at around $630 billion - are the fourth-highest in the world,” he said.

Overall, experts do not expect a major impact of Fed tapering on FII inflows as they feel India is expected to attract FIIs and FDIs in the coming period, with several initiatives taken by the government and the ‘China plus one’ factor. Volatility, oil price on the rise

Volatility has been gradually increasing for more than a month now. India VIX, which measures the expected volatility, increased to around 19 at the end of September, from 13-14 levels in the beginning of September. It is now around 16.3. Even the CBOE Volatility Index jumped up to nearly 26 on September 20 from the 16.11 levels on September 1. It is now at the 20.5 levels.

Crude oil price spiked to $83 a barrel on October 6, 2021, the highest since October 2018. This has raised inflation worries.

On Monday, OPEC and its allies had retained its decision to increase output gradually. The price fell below $80 a barrel today, after an unexpected increase in US crude stocks.

A look back at September

Momentum in September was so good that the benchmark indices hit historic highs, gaining nearly 3 percent, though broader markets underperformed.

Disclaimer: The views and investment tips expressed by investment expert on Moneycontrol.com are his own and not that of the website or its management. Moneycontrol.com advises users to check with certified experts before taking any investment decisions.
Sunil Shankar Matkar
Tags: #Market Edge #Nifty #Sensex
first published: Oct 7, 2021 03:20 pm