Last week in startup funding | Byju's gets another $200 million, valuation touches $12 billion; Cars24, Cashfree, and others too raise funds

Byju’s: The poster boy of the edtech ecosystem in India, Byju’s has been a darling of investors the world over. This week news broke out about it landing another $200 million from large equity investors like T Rowe Price and BlackRock. Since the acquisition of White Hat Jr and the overall growth of the edtech sector post the COVID-19 pandemic, not just Byju’s, but multiple other companies in this space have been in the spotlight. As per media reports, the latest round pushes the valuation of the company to $12 billion.

Cars24: Another unicorn in the startup club, used car retailing startup Cars24 raised $200 million from Russian billionaire Yuri Milner’s DST Global. Cars24 saw multiple factors playing in its favour. Firstly, demand for second-hand and cheaper vehicles post the pandemic, since people were reluctant to travel by public transport. Second, many consumers might be looking to sell their spare car, again helping Cars24 get business. Further, the company itself has forayed into the finance business, which might also have helped push up its valuation. The used-car business has a strong lending angle, too, which the company would want to tap into. 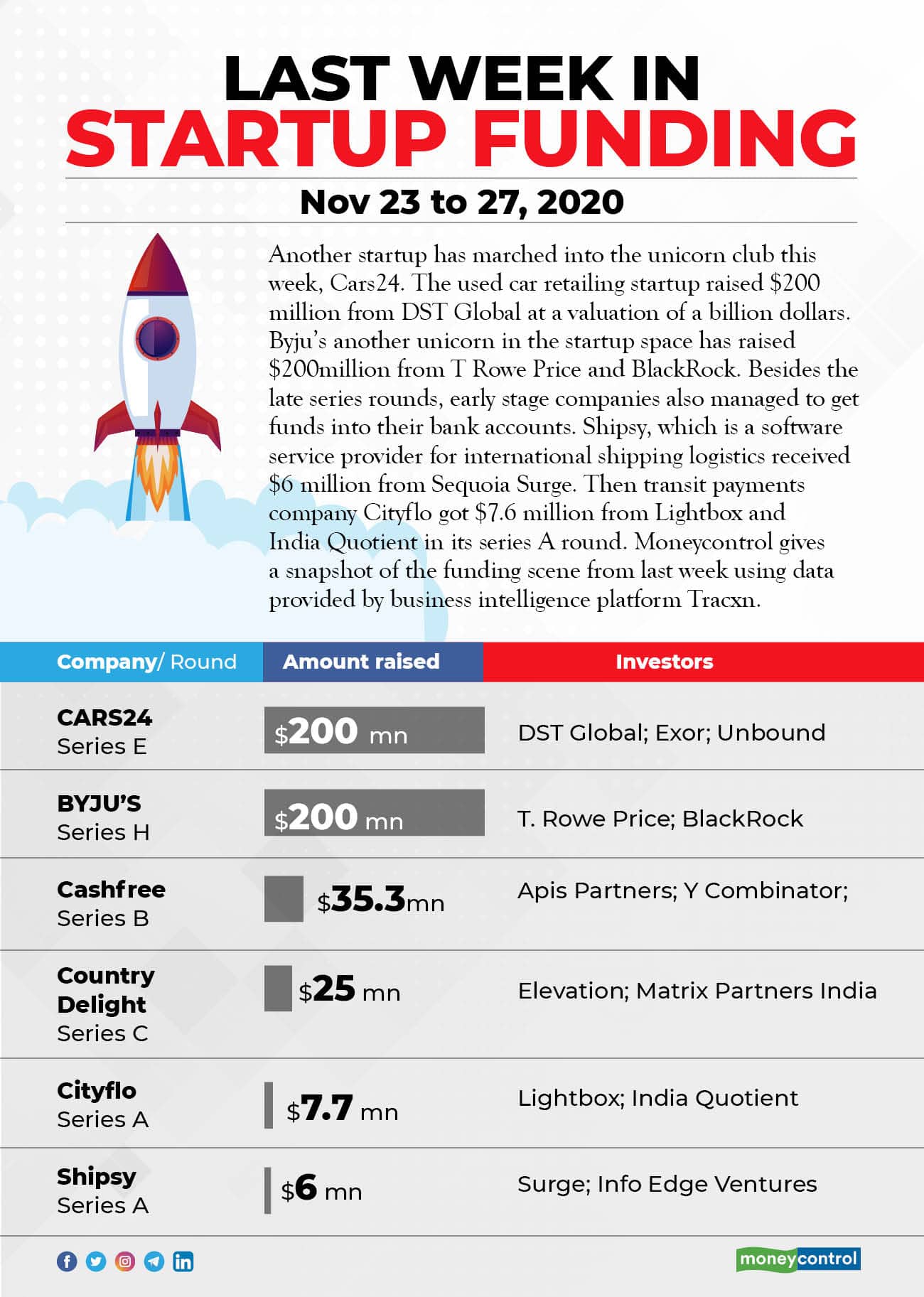 Cashfree: Once Razorpay marched into the unicorn club, there was a strong buzz around other payment gateway players receiving investor interest too. Bengaluru-based profitable B2B payment solutions startup Cashfree got $35 million from a clutch of investors including Y Combinator, which is an investor in Razorpay too. Digital payments is a hot space now and with so many large businesses looking to sell online, there is a massive business opportunity for the likes of Cashfree.

Country Delight: The buzz in the direct-to-home fresh food category continued this week as well, with Country Delight getting $25 million from Elevation (previously Saif Partners), Matrix Partners and others. The full stack digitised dairy retailing brand has shown strong growth even during the pandemic. Its quality and standard of products has helped it to stand out in a cluttered market dominated by the likes of Mother Dairy and Amul.

Cityflo and Shipsy: Both early-stage startups received funding in their series A rounds. While Cityflo has become more relevant after the pandemic since it promotes digitisation of public transport ticketing, Shipsy has assumed significance with the need to digitise international shipping. Further, Shipsy is already making money and with the new round is looking to grow its business quickly.
Pratik Bhakta
Tags: #Business #Byjus’ #CARS24 #cashfree #Cityflo #Country Delight #funding #Shipsy #Startup
first published: Nov 28, 2020 11:37 am