Fino Payments Bank turned profitable in FY21 and its merchant network has grown from 2.77 lakh in FY20 to 7.77 lakh currently. The fintech company will use the funds raised from its IPO to build its digital infrastructure and on branding and marketing.

Incorporated in 2007, Fino Payments Bank's aim is to give Indian customers the choice of banking both through digital and physical modes.

Over 14 years after its inception and four years after it got approval to become a Payments Bank, Fino is set to go public with a Rs 1,200 crore Initial Public Offering (IPO). The issue opens on October 29 and will close on November 2. The price band has been set between Rs 560 and 577 per equity share of face value of Rs 10 each.

Of the Rs 1,200 crore, the primary fundraise is only Rs 300 crore, while the offer for sale (OFS) by promoter Fino Paytech is Rs 900 crore. Moneycontrol spoke to MD and CEO Rishi Gupta, who said that the bank prides itself on its asset-light model, built on a network of merchants that serve as points for customers to carry out financial transactions.

Gupta said that the aim of the bank is to have a presence in every lane in India and provide omnichannel offerings. Edited excerpts:

Your IPO is coming in the midst of many other internet IPOs, such as Nykaa and Paytm. Is it a worry? Do you expect good investor interest?

We think the IPO subscription should go well. We have seen good interest in our anchor book, which is an early indication in terms of interest in the stock. Being in the business for the last 15 years and as a bank for the last five years, we have been functioning like a fintech with a regulatory license, so we are definitely in a sweet spot compared to others.

We are also a very fast growing fintech company and are profitable. That is again a unique proposition because normally people believe that fintechs can't make money. So, we have probably broken that myth – you can be profitable if you get the right business model. We have been growing quite aggressively -- in the last two years until March 2021 our business grew by 71 percent. In the first quarter of FY22 as well, we grew by 50 percent on a year-on-year basis.

What is important is that we have turned profitable from being a loss-making entity. We were profitable in the quarters of both the first and the second wave of COVID-19. That is a testament to the fact that the business model is strong, stable as well as sustainable and it can sustain the shock of any external event.

We have also been growing in terms of transaction volumes, products and merchants. We now have 7.77 lakh merchants; we grew by about another 25,000 merchants in the first three months of FY22. 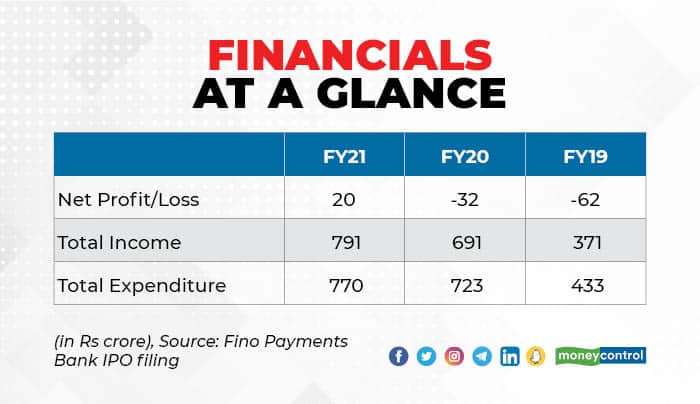 The price band has been set between Rs 560 to Rs 577. How was the valuation arrived at?

So, the valuation is something that is arrived at after negotiations between the company and the investors and if people are ready to invest at that value. We are a fast-growing and profitable fintech. As per the price band, we are valued at about 6x our FY21 revenue. We are not an asset-based bank, we don't give credit. So, we cannot be valued on price to book as such, and all fintechs are valued on the price-to-revenue benchmark. Our price to every multiple is much lower than many others although we are profitable. Secondly this price is for a share of face value of Rs 10. For others the pricing could be for shares of face value of Rs 2 or Rs 5. So, it is like comparing apples with oranges.

Of the Rs 1,200 crore that Fino will raise from the IPO, only Rs 300 crore is a fresh issue of shares. How will those proceeds be used by the company post the IPO?

The primary component is only Rs 300 crore because our business, the way we have built it up, doesn't require that much capital. Having said that, the part of the primary raise is going to be largely used for building our digital and technology infrastructure and for brand and marketing expenses.

The fintech space has seen a lot of growth and many new-age fintechs are offering services across products. How do you see the challenge of growing competition?

I would not say that we are not worried about competition, you are always worried. But our business is more nuts-and-bolts with feet on the ground. We have to go to the towns and villages. We don't even spend much on our marketing and branding because our model is different.

Secondly, we are building a very asset-light and scalable model. Looking at the needs of emerging India you need to give them physical access and you need to also build digital tools over it. Cash in circulation has nearly doubled post demonetisation. Our belief in the company is that the customer should be given a choice whether he wants to deal in cash or whether he wants to go digital. We don't want to limit ourselves with customers coming to us only for the digital platform. They have money, they want to give me money, I can digitize that for them or put that into a bank account, transfer it for them, whatever they want to do. The model that is required is phygital – a mix of the digital ecosystem and physical network.

The important question is that when you're looking at this emerging India segment, how do you make a scalable and sustainable business model? So, to that extent, we have built a model in which we request the customer to come to a merchant point to transact. We are also engaging with them on more and more products. The merchant already has a shop; he doesn't need to set up anything for Fino.

I add one banking point to that merchant. So, if he's a grocery shop owner, he can also now do banking transactions for customers who are coming to buy groceries. This can be scaled up further with more merchants. So that is where we are differentiating, and while we are keeping an eye on growth we are also focusing on profitability. We are not incurring higher fixed costs. It's a variable model, for every transaction, I am getting some gross margin. 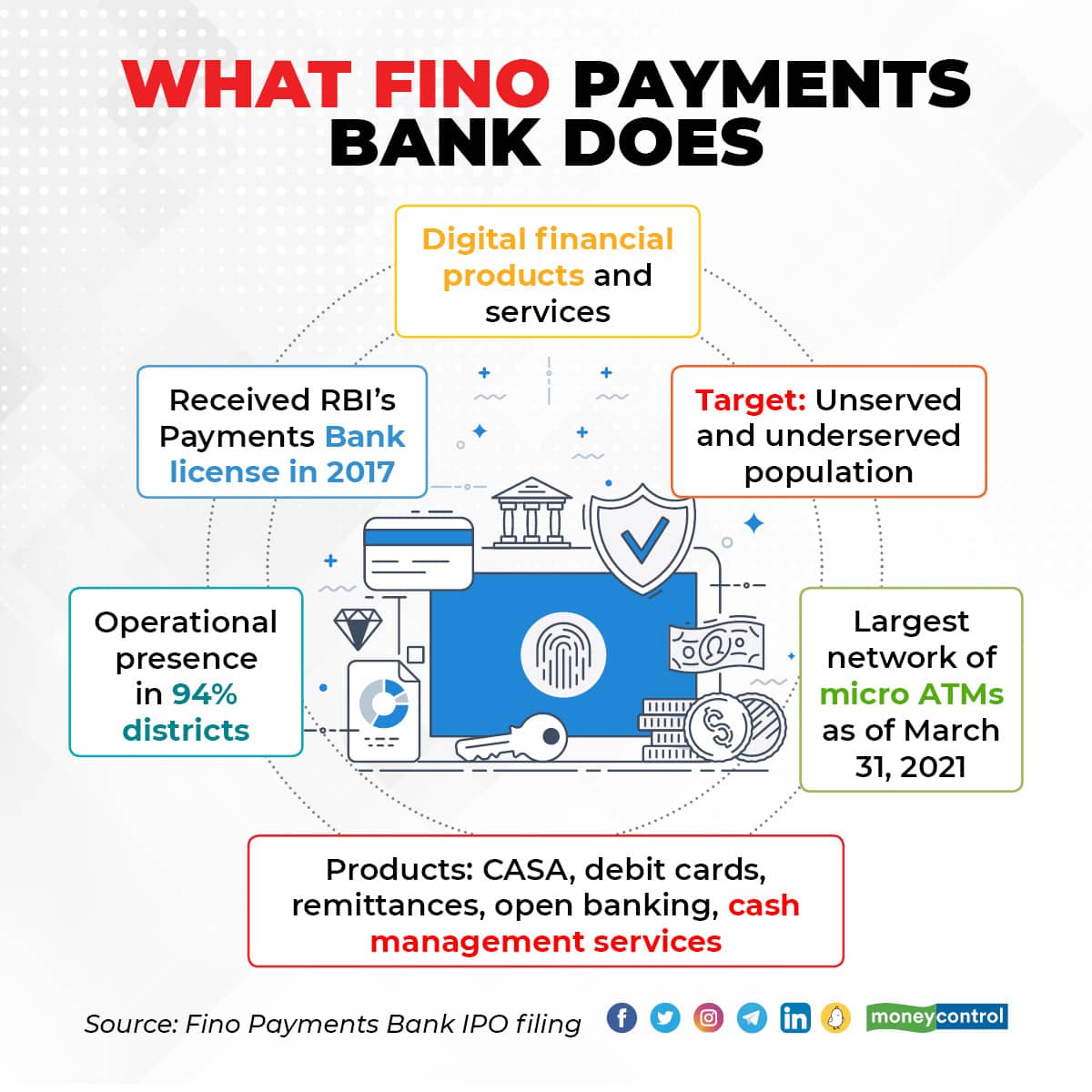 Will you continue with this asset-light model or are there any plans to change that?

Yes, we don't want to get into a high-fixed-cost model. Because lack of fixed costs is one of the reasons we continued being profitable even during COVID-19. Our fixed costs were only our employees and our gross margins could cover employee costs.

How do you see your merchant base, geographical penetration and micro ATMs network growing in the next few years? And are you seeing a major shift in the way consumers accept these products and choose the phygital mode?

We were adding around 600 merchants per day in FY20 and about 1,000 per day in FY21. Right now we are adding around 1,100 to 1,200 merchants every day. We believe there are enough and more opportunities to expand the merchant network across the country because we want to be present in every lane in India should have a Fino point. My dream is that if a customer does not need to go beyond 100 metres to buy groceries then why do they need to travel 5 kilometres to withdraw money or for simple banking transactions. Why can't we make it so ubiquitous with an omnichannel presence that withdrawal and banking can be done anywhere. That is something we will continue to build on and aspire to grow.

On Micro ATMs, the growth numbers are quite good — we have nearly 55 percent market share there. We are seeing good traction both on Micro ATMs and the Aadhaar Enabled Payment System (AEPS) because those are interchangeable products. We are seeing a shift in consumer behavior to come to a local neighborhood point for simple transactions rather than going to a branch.

In terms of accounts, in 2020, we were opening 3,000 accounts a day. Now, we are opening 6,000 per day. Our CASA transaction volumes grew 4x in Q1 of FY22 versus Q1 of FY21 despite the second wave of COVID-19. These data points show that that it is more of a permanent change in consumer behavior and not a temporary shift.

We request the customer to come to a merchant point to transact
You can't lend from your book because the payment bank license does not allow that. But do you have any plans on the credit side, which you can explore through tie-ups?

Yes, we don't have any credit exposure on our books. 97 percent of our income comes from the transaction business and 3 percent comes from Net Interest Income (NII). So, we are largely credit-risk free.

Right now, we have three products that we are offering customers and merchants, but through partnerships. One is a gold loan where we have a tie-up with a bank and an NBFC. We disburse about Rs 125 crore worth of gold loans in a month. We have also started to do merchant loans, again through an NBFC tie-up. That has picked up quite well and around Rs 3-5 crore worth of disbursements is happening every day. The third is a consumer loan for women customers.

We may look at a couple of more partnerships on other products that we want to offer, such as vehicle financing or other consumer loans. But we want to test the hypothesis first and then build on that.