Hike in airfare cap: Airline ticket rates have been on an uptick since January

While the government has hiked the cap on airfares by up to 30 percent, ticket rates may increase only by 10 percent immediately, say industry observers, pointing at passenger traffic that remains below its pre-COVID-19 levels.

At the same time, data shows that airfares have already been on the higher trend since the start of the year. Some of the metro routes have seen average fares increase by up to 78 percent.

On February 11, the government had two updates to share. One, it extended the 80 percent cap on capacity utilisation till March 31. Second, it increased the cap on airfare. For example,  flights that have a duration of 90 to 120 minutes now have the lower fare cap increased to Rs 3,900 from Rs 3,500. The cap on maximum chargeable fare has been increased to Rs 13,000 from Rs 10,000.

The move is a positive for airlines, with stocks of two listed companies IndiGo and SpiceJet getting a push. While share price of SpiceJet jumped over 4 percent, that of IndiGo gained over 2 percent, in early trades on Friday morning.

"Hike in airfare cap is long overdue as that is the only way cross-subsidization of airline operations expenses could be addressed. A healthy balance between operations cost and passenger yield is not only better for the airline but is also beneficial to passengers," said Nripendra Singh, Industry Principal, Aerospace, Defense & Security Practice, Frost & Sullivan.

"The passenger traffic slowly returning back to normal domestically is a good sign for the airlines. Currently, it is domestic operations, which is the sole hope for airlines in India, and capping the fares would be a deterrent to the overall air travel ecosystem," he added.

In fact, the year started off on just the right note.  Air passenger traffic grew by 3.51 percent in January, compared to the numbers in December 2020. "While the numbers are just 60 percent of what the last January was, this is the best performance when it comes to traffic numbers in January over December, in a clear indication that there continues to be a steady rise," Ameya Joshi, who runs the aviation analysis website Network Thoughts, wrote for Moneycontrol.

"Domestic travel is soaring high in numbers on a daily basis.  Now the hike in fare cap will increase profitability of airlines. But it won't be too hard on the consumers. We expect fares to increase by 10 percent," said a senior executive at an online travel agency.

Air fares have also began the trek north since the beginning of the year.

Data from Caladrius Aero, an aviation consulting  firm, shows that average fare per km has kept on increasing from the first week of January.

"We have seen a trend in an increase in average fare per km for the last month of January and proceeding to February first week. With loads being compromised due to vulnerability in traffic scenarios, it is important to push the fares up in the current market scenario," said Rohit Tomar

The trend has been pronounced in the metro routes. 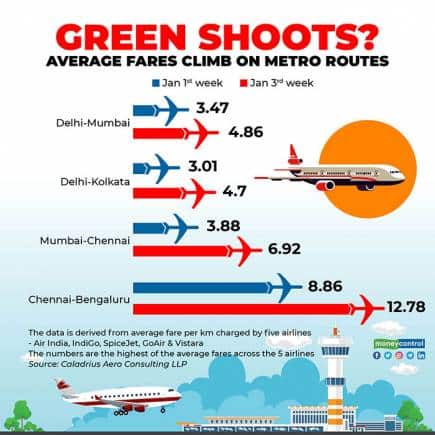 The data threw up average fares charged by five airlines through the January. On the four routes listed above, the increase in fares ranged from 40 percent - in Delhi-Mumbai - to 78 percent, on the Mumbai-Kolkata route.

Airlines will be now hoping for the trend to sustain as customers now begin booking ahead of summer holidays, the peak season for travel.