Franklin Templeton: What happened behind the scenes, including on risk management

The Franklin Templeton saga is a cautionary tale on how fund houses and regulators must protect the interest of investors. Ahead of a crucial hearing by the Supreme Court on February 23, Moneycontrol analyses the vital aspects of the case, based on new findings from an audit.

First, a quick catch-up on the story so far.

On April 23, 2020, in a sudden move, Franklin Templeton Mutual Fund announced the winding up of six of its debt mutual fund schemes in India with total assets between Rs 25,000 and Rs 30,000 crore (roughly $3.75–4.25 billion) affecting more than 3 lakh investors. The virus and the resultant illiquidity in debt markets—specifically in lower-rated debt held by these schemes—were cited as the reasons for this winding up decision by Franklin Templeton.

Much has happened in the past 10 months. There were a litany of court litigation, followed by allegations of mismanagement by Franklin Templeton, which the company denied, and investors approaching courts. A deadlock ensued.

As an immediate relief, Supreme Court, in its orders dated February 2 and 9, 2021 broke this deadlock by directing the distribution of cash surpluses of R. 9,122 crore. The court named SBI Funds Management to oversee the winding up and return of money to investors.

Further hearings in Supreme Court continue to determine whether Franklin Templeton is actually responsible for mismanagement or have investors knowingly taken the undue risk to satiate their greed of higher returns and have only to blame themselves.  The truth—as they say—lies somewhere in between.

What has SEBI done so far?

The role of the capital market regulator was cast in an unusually negative light by the Karnataka High Court. The court castigated SEBI for being a “Silent Spectator” rather than taking a proactive role in protecting the interests of unitholders.

On May 27, 2020, only after a flurry of media reports and investor complaints did SEBI order a forensic audit/inspection of Franklin Templeton. The final Forensic audit Report was submitted to SEBI on October 9, 2020.

Franklin Templeton has maintained that all their actions have always been in the best interests of unitholders. Some puritans defend the company, saying investors were well aware of the portfolio risks, enjoyed high returns, and now are complaining without any basis.

In the following paragraphs, we unravel what was happening behind the scenes specifically with respect to these schemes with six facts.  Most of that we highlight has been covered in the final forensic audit report and/or the adjudication proceedings of SEBI.

The adjudication proceedings of SEBI are ongoing and some of these facts below will also be put in front of the Supreme Court during the course of the hearings either by SEBI based on what they finally conclude or by the investors if they are given access to Forensic Report by the Supreme Court.

Fact No. 1:  Interference in Risk Management at Franklin Templeton

According to SEBI regulations, Risk Management is a key independent function in mutual funds. Risk Management has to highlight any risks that are foreseen for corrective action without any undue influence from other functions.  We draw up a timeline below. Note the timeline pertains to a period much before the winding up of the schemes.

July 2019:  The head of Risk Management at Franklin Templeton sent a presentation, which incorporated concerns with respect to holding in debt securities of certain issuers such as YES Bank, DHFL, and Vodafone in the debt schemes.  This presentation was proposed to be presented to the board in the meeting scheduled on July 15, 2019.

July 4, 2019: The CEO of Franklin Templeton approved the final presentation of Risk Management which included these concerns on specific debt securities in the schemes to be presented to the Board.

July 8, 2019: Marcel Ndge (who is not part of the Franklin Templeton India AMC but the reporting manager of Head-Risk Management) amends and makes changes to the presentation.

July 13, 2019:  The Risk Management presentation is finalised and the initial concerns raised on the debt securities of these certain issuers are excluded from this. These concerns are excluded on the premise that they were speculative in nature and included without any justification.

The above sequence of events demonstrates how there was interference and exclusion of concerns of the Risk Management leading to risk not being a truly independent function within the Franklin Templeton India entity.

Fact No 2:  Liquidity Issues in the Portfolios highlighted much in advance at the board meetings.

Head of Risk Management informed the boards that almost 35-50 percent of the portfolios of debt schemes were illiquid in May 2019, August 2019 and September 2019.

A specific warning “Liquidity might be difficult to achieve in certain fund flow environments/market conditions” was stated by the Risk Management team in the Board meetings quite way ahead of the actual winding up.  However, the board did not issue any corrective mechanism to address these illiquidity issues that were building up in the portfolio much before the actual event.

Fact No 3: Early Warning Signals not given due weightage.
The risk management team in the board meetings held on July 15, 2019, October 25, 2019, December 3, 2019, and March 6, 2020, presented the board with concerns with respect to some of the debt securities being shortlisted in their Early Warning Signal (EWS) system.  Hence the boards were repeatedly informed of the said concerns in specific debt issuers within the portfolio of the debt schemes but no corrective directions were given to the fund management team or the senior management to mitigate these risks due to these early warnings.

Fact No 4: Macaulay Duration of Portfolios were miscalculated.

The guiding principle is that interest rate reset dates can only be considered as maturity dates only if there is an exit option on those dates under all conditions. As per the auditor, if one were to just take this condition into consideration, the Macaulay Duration changes considerably than what was represented by Franklin Templeton to investors and also will breach the regulatory limits specified.  A specific example is shown in the Table 1 below. 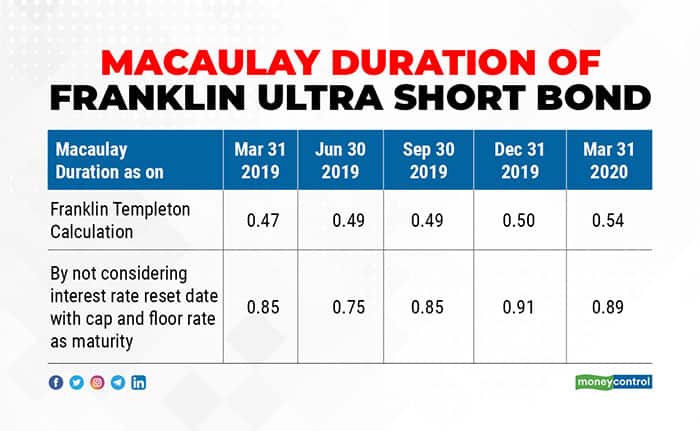 In a response to a SEBI, Franklin Templeton said that they were using Inter Scheme Transfers (ISTs) for managing the liquidity of the schemes on the basis of the judgment of the fund manager. ISTs for managing liquidity is an unfair practice because it impacts both the transferor scheme and the transferee scheme.

Additionally, there have been cases where debt security did pre-payments and was held by various schemes. However, the pre-payment was only credited to one or two schemes to manage the liquidity issue rather than a pro-rata pre-payment across schemes. Though there is no regulation binding this, clearly this is an unfair practice and also goes on to show that the liquidity issues of one scheme would impact the investors of another scheme. Ergo, these schemes were not being independently managed from each other.

The auditor has highlighted email exchanges between fund managers Kunal Agrawal and Santosh Kamath on deciding on such pre-payments to specific schemes without giving equal treatment to unitholders of other schemes but only based on liquidity. Though Franklin Templeton has responded to the regulator on the same stating that the judgment of fund managers were taken with many other factors into consideration but that unitholders of one scheme are impacted due to this remains and SEBI has issued a Show Cause Notice on this to them.

Some puritans defend the company, saying investors were well aware of the portfolio risks, enjoyed high returns, and now are complaining without any basis
One of the observations from the auditor is that Franklin Templeton Trustees failed to ensure that the IPN (Investment Process Note) contained detailed and objective criteria for investments.  Franklin Templeton also failed to satisfy the auditors that IPN requirements were complied with, per the auditor. The board had specified very broad parameters for the IPN but did not cover any objective criteria or periodicity for review among other factors that should have been there in the investment process, according to the auditor.

The story so far has been one-sided to the detriment of unitholders of these six schemes.  Unitholders lost complete liquidity to their money in times of the pandemic when some of them needed it the most.

Some investors had to push back their financial goals or make alternative arrangements for funds.  And there was also uncertainty on how much and when they will get the money back, causing them severe mental trauma and stress.

The only option left for unitholders was to vote ‘Yes’ in the winding upvote if they wanted access to their own money at a fair price and rightly so most did vote accordingly.

Now that the six schemes are under winding up with SBI Funds Management with a commitment to return monies in the best possible way, it is a sense of relief for investors. The focus now needs to shift on the facts of the case, putting out these facts to the investors and the Supreme Court and pinning of responsibilities. More so it is imperative for SEBI to ensure that in the future such a situation is avoided.

The guiding principle has to be that value of money is only if you are able to use it when you need it. Every investor saves for a rainy day and when the rainy day comes, if we were to lock-in access to these funds, what is the point of saving?

Responding to this column, a Franklin Templeton spokesman told Moneycontrol: "Franklin Templeton has robust risk management practices in place and the investment team considers inputs from the risk management team in taking investment/divestment decisions. It is a well-documented fact that instruments with credit rating below AAA faced a severe liquidity crisis during the COVID-19 pandemic-induced lock-down, both in India and globally.  Also, Macaulay Duration is computed by third party agencies at the industry level.  We have submitted detailed responses to the showcause notice issued by SEBI.  We believe it would be inappropriate to comment on speculation and request investors not to draw conclusions based on conjecture."