The Pradhan Mantri Jan-Dhan Yojana has largely met its objective of providing every adult a bank account. Yet, banks are still trying to figure out how to make the accounts cost-effective

Almost eight years after the Pradhan Mantri Jan-Dhan Yojana (PMJDY) was launched, banks are still struggling to make the accounts viable and cost-effective.

From a business perspective, the carry cost of Jan-Dhan accounts outweighs the benefits of maintaining them, bankers and experts told Moneycontrol.

“For banks, the average cost of maintaining a Jan-Dhan account is in the range of Rs 3,200 to Rs 3,500 per year. Even though a majority of the maintenance is handled through technology, the time involved and the human intervention involved for every new account becomes an issue,” said the managing director and chief executive of a state-run bank, requesting anonymity.

“The net cost of maintaining these accounts for banks will go down further only if the deposit base increases in the coming months,” said the MD.

“Currently, the average deposit amount in the Jan-Dhan account is around Rs 3,000. It is expected to rise to Rs 5,000 to Rs 6,000 eventually, but that will be a slow, long-drawn process.” 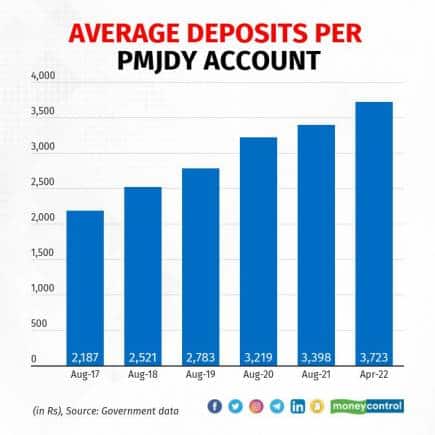 A burden on banks?

To bring affordable banking products and services to the door of every unbanked household in India, the Narendra Modi government launched PMJDY in August 2014.

According to government data, 454.7 million beneficiaries have so far opened Jan-Dhan accounts, which have a collective balance of more than Rs 167,400 crore. A majority of the accounts are in public sector banks, followed by regional rural banks and private sector banks.

For everything from direct benefit transfers and COVID-19 financial aid to life and health insurance, you require a bank account. PMJDY has largely achieved its objective of providing every adult Indian with a bank account.

The flipside: many accounts are dormant or little used, increasing the carry cost of banks. Many of them also have low deposits. As of April 13, the average deposit per account was Rs 3,723, according to government data. In August 2021, out of total of 430.4 million PMJDY accounts, only 368.6 million were active. Banks make most of their money by loaning depositors’ money to borrowers at a certain interest rate. Depositors are also paid interest for parking their money with banks. The difference between the two is the margin for the bank.

The interest rate applicable for a Jan-Dhan saving bank account is presently around 4 percent for most state-owned banks. This is higher than the interest paid on regular savings bank accounts, which is in the range of 2.75 percent to 3.50 percent.

“For every new Jan-Dhan account, banks have to take on the cost of conducting KYC, or Know Your Customer, procedure. This still requires human capital in most rural areas and this forms around 40-to-50 percent of the cost there,” said another banker at a state-run bank.

Once a Jan-Dhan account is opened, banks are required to perform maintenance work like issuing checkbooks and RuPay debit cards that carry an additional cost burden.

More often than not, this is not equal to the returns that banks get from these accounts. This also explains banks’ lack of enthusiasm for the accounts.

“Banks are constantly pushed to ensure the flow of credit through government schemes, but there has to be a way that banks benefit from this,” said Jayanta Sinha, independent banking consultant and former chief general manager (rural business) at State Bank of India. “The cost of servicing these accounts is becoming an issue.”

Government data shows that the pace of growth in the number of Jan-Dhan beneficiaries and deposits has been since the scheme was launched.

“For banks, this (Jan-Dhan accounts) forms a small portion of their deposit base and the additional cost with every new account is high,” said Jindal Haria, director–of financial institutions, India Ratings. “Hence, the utility of these accounts from a transactional point of view has not matched expectations.”

Jan-Dhan accounts are either inoperative or minimally active for a variety of reasons. For one, most individuals who open these accounts belong to marginalised sections and have very little savings they can deposit in them. Government benefit transfers dominate transactions in Jan-Dhan accounts.

“Poor Jan-Dhan account holders have not used these accounts to bring their private earnings into those accounts. This is because the poor don’t have much to save from their current earnings,” said Subhash Chandra Garg, a former finance secretary.

“The use of the banking accounts as a transaction tool for payments has also not improved much because these accounts are not very convenient to use for deposits and payments in comparison to cash,” Garg added.

Cash is the primary mode of payment for the poor although India has made headway in digital banking. And few rural borrowers are able to transact during banking hours because they are busy earning a living.

Take, for example, the case of Ambi Patel, a 52-year-old household help in Mumbai’s Aarey Colony.  She opened a Jan-Dhan account with a Mumbai-based cooperative bank in May 2018, but she has not made any withdrawals or deposits over the past few months because her earnings are in cash and savings are negligible.

Growth in Jan-Dhan deposits has slowed because government welfare benefits have remained constant are not putting their earnings into the accounts, said Garg.

“Banks have reached a stage where nothing significant is expected to grow,” he said.

There is little evidence of loans being taken or credit being delivered to Jan-Dhan account holders in the past eight years. And these customers do not, as a rule, buy products like insurance from banks because of their lack of awareness.

“It is unlikely that these consumers will opt for third-party products in the banking space, and that goal will take a lot of time to be achieved,” said Ashvin Parekh, managing director of Ashvin Parekh Advisory Services.

Most of these accounts were created for a floating population like construction workers, who are consistently on the move and have opened multiple postal, cooperative and commercial bank accounts under the Jan-Dhan scheme. Their monitoring and servicing is another challenge.

“There is no common database either with the Reserve Bank of India or with banks that addresses this overlap. This cleaning up may not happen for at least the next five years,” said Parekh.

“There is a dual problem that consumers are keeping these accounts dormant while banks, on the other hand, are not closing them,” Parekh added.

A lot needs to be done on the ground to make Jan-Dhan become more viable for banks, experts said. Banks should make customers aware of the advantage of putting their savings in the accounts, nudge them into buying other products they have on offer and opt for formal bank credit.

“Right now, the focus should be on how to increase the amounts in individual accounts, how to make the service more cost-effective using technology, lessen the burden on banks and enhance loan distribution,” said Sinha, the independent banking consultant.

​Some experts said strict KYC norms should be eased for extremely marginalised borrowers. Banks should adopt technology, rather than deploy human capital, to service these accounts.

“What needs to be done more is to make this very simple. UPI (unified payment interface), for example, has made banking very simple. That needs to be applied to all these accounts,” said former finance secretary Garg. “Many of these accounts are still not there in the UPI ecosystem. Once these are boarded there, the duplicity of accounts will go away.”
Siddhi Nayak is correspondent at Moneycontrol.com
Tags: #Pradhan Mantri Jan-Dhan Yojana #Subhash Chandra Garg
first published: Jun 1, 2022 04:48 pm