The Indian economy remains resilient, drawing strength from its macroeconomic fundamentals, says RBI Governor Shaktikanta Das and assures that the RBI will be watchful of the MPC policy's impact and be ready to act as may be necessary

The Reserve Bank of India’s monetary policy committee hiked the key repo rate by 35 basis points (bps) as expected on December 6, saying the battle against inflation would continue even as it lowered the FY23 GDP forecast to 6.8 percent from 7 percent.

The hike in the key benchmark lending rate was lower than the 50 bps increase the central bank thrice went for since June and an off-cycle 40 bps increase in May.

Inflation “remains high and broad based” world over, Das said, adding fragmentation in trade, finance and technology was adding to de-globalisation.

"While being watchful of the impact of our earlier monetary policy actions, we will keep Arjuna’s eye on the evolving inflation dynamics and be ready to act as may be necessary. Our actions will be nimble and in the best interest of the economy. The aspect of growth will obviously be kept in mind,” Das said as he concluded his address.

Here are the highlights of the RBI governor’s speech:

The Standing Deposit Facility rate and Marginal Standing Facility (MSF) rate were also increased by 35 bps each to 6 percent and 6.5 percent, respectively.

— Stance focused on ‘withdrawal of accommodation’

Das said the MPC voted 4-2 to remain focused on withdrawal of accommodation so that inflation remains within the target while supporting growth.

On balance, MPC was of the view that further calibrated action was warranted to keep inflation expectations anchored, break core inflation persistence and contain second-round effects.

Das, Bhide, Ranjan and Patra voted to remain focused on the withdrawal of accommodation. Goyal and Varma voted against this part of the resolution.

Adjusted for inflation, policy rate remains accommodative. Inflation is expected to be above 4 percent in the next 12 months.

“Manufacturing, services PMI for India in November among the highest in the world. Going ahead, investment activity will get support from government capex. RBI surveys show consumer confidence has further improved. Manufacturing and infrastructure firms are optimistic about the outlook,” the RBI governor added.

Das said the battle against inflation was not over. The CPI inflation forecast for April-June 2023 has been retained at 5 percent, while for July-September it is seen at 5.4 percent.

Das was optimistic that the liquidity conditions would likely improve. “We will look for durable signs for turn in liquidity cycle for infusing liquidity. The RBI remains nimble and flexible in its liquidity management operations,” he said.

The governor said though the RBI was in an absorption mode, it was ready to conduct LAF operations that inject liquidity as may be needed. “We will look for a durable sign of a turn in the liquidity cycle. Market participants must wean themselves away from overhang of liquidity surpluses,” he added.

— Impact on the rupee

Das said the Indian rupee appreciated 3.2 percent during April-October in real terms, even as major currencies depreciated. “The rupee should be allowed to find its level,” he added.

— On forex and exports

Das said slowing external demand was weighing on India’s merchandise exports but the size of forex reserves “is comfortable and has increased”. 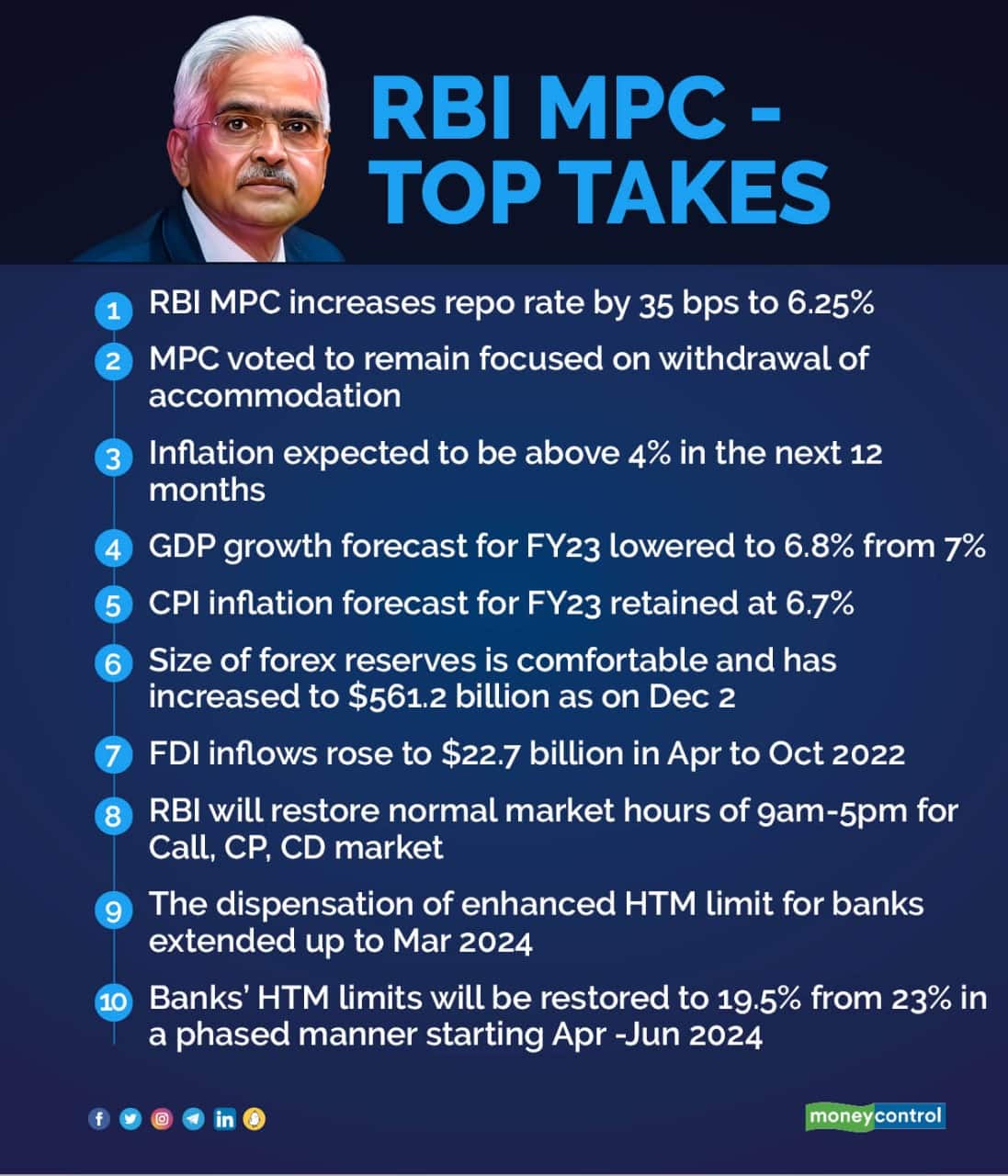 Key Takeaways of the RBI MPC announcement on December 7

The governor also announced that:

— Banks’ HTM limits will be restored to 19.5 percent from 23 percent in a phased manner starting April-June 2024