While school curricula now include new subjects and regional languages have been made the medium of instruction, the key change in allowing flexibility for students to enter and exit college courses is awaited

India completed one year of the National Education Policy (NEP) 2020 on July 29. The policy was revised after 34 years to meet the changing needs of Indian and international education standards.

A lot has changed in one year. Curricula have been tweaked in schools to include subjects such as financial literacy and artificial intelligence.

When it comes to the medium of instruction in schools and colleges, the mother tongue or a regional language has been introduced on a pilot basis. This applies even to engineering courses and a few institutes have been chosen to implement this initiative in the 2021-22 academic year.

The primary objective of NEP 2020 was to reduce undue focus on the Class 10 and Class 12 board exams. Consequently, board exams administered by the Central Board of Secondary Education will have a higher number of multiple-choice and analytical questions from 2022. The government will release a detailed policy framework on the changes in board exams by the end of this year, people aware of the matter told Moneycontrol.

With holistic education one of the key goals of NEP 2020, multidisciplinary streams have started across institutes. This means that engineering colleges will not only offer technical courses but also commerce and humanity subjects.

While there’s been considerable progress on curriculum changes and the introduction of regional languages, some key reforms are pending and they include the flexible entry and exit for college students and allowing international institutes to set up campuses in India.

Here is Moneycontrol’s lowdown on the state of NEP 2020 after one year:

NEP 2020 envisaged a system where schools and higher education institutes would allow students to pick and choose subjects based on their interests and aptitude. This means an engineering student should also be able to study economics or design in the same institute. Moneycontrol has reported how the Indian Institutes of Technology, the country’s top engineering collages, are looking to start courses including economics, design, music, business administration, linguistics and literature.

The education ministry has asked all higher education institutes to offer a wide array of courses across streams in order to have a diverse student population. IIT Bombay, IIT Delhi, IIT Madras and IIT Roorkee are among many such institutes that offer courses beyond traditional engineering.

In schools as well, subjects such as financial literacy, data science and artificial intelligence will be offered to students on an optional basis. As part of this initiative, CBSE has tied up with Microsoft to help Class VI-VIII students work on coding-related modules starting in the 2021-22 academic year.

“Since early-age skilling is being launched from the sixth grade, it is crucial that subjects like data science are made part of the curriculum. Initially, we will appoint part-time guest teachers but as the numbers pick up, full-time staff will be appointed,” said Seema Chawla, vice-principal of New Blossom High School in Punjab’s Gurdaspur.

According to a UNICEF report, India’s education system is one of the largest in the world, with more than 1.5 million schools, 8.5 million teachers and 250 million children from varying socio-economic backgrounds. 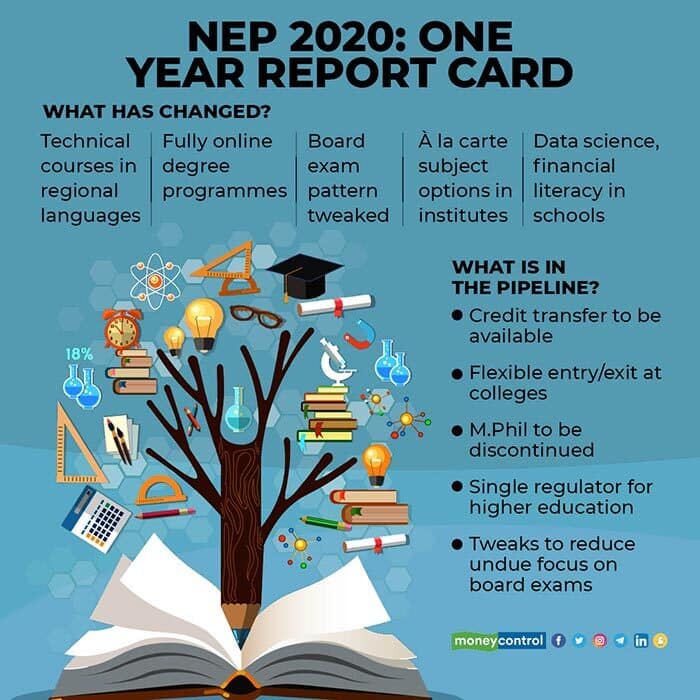 NEP 2020 allows the top 100 universities in India to offer online degree courses to make them affordable and improve accessibility. Following this, online platforms are offering a range of courses in partnership with institutes.

A key aspect of NEP 2020 was the promotion of all official languages of India, apart from English. It was suggested that schools and higher education institutes give students the option to study in their mother tongues. A few hundred schools in the country are now offering this option on a pilot basis. The translation of books is under way.

Education minister Dharmendra Pradhan said on July 26 that technical education will be offered in eight regional languages in certain institutions on a pilot basis from 2021-22. The regional languages are Hindi, Bengali, Tamil, Telugu, Marathi, Gujarati, Kannada and Malayalam.

At the school level, the first step will be to invest in teachers who can speak multiple languages. Currently, mostly teachers speak English, a regional language and/or Hindi. Under NEP 2020, schools and colleges must train teachers in additional languages or hire more staff.

RK Gupta, principal of Kolkata-based Aim High School, said this will be an additional expense. He said a decision on hiring new teachers and translating academic content will be taken in 2022, depending on how many students want to study in regional languages.

The education ministry has informed schools and higher education institutes that regional language-based curriculum will be optional. However, it reiterated that no student can be denied entry to a course only because he/she is not fluent in English.

What’s in the pipeline?

A major change proposed in the education policy is allowing foreign universities to set up campuses in India and giving complete entry-exit flexibility for courses taken by college/university students.

Some early work has started on this front. Flexible entry and exit grants academic credit for partially completed courses. A student who quits a degree course after one year gets a certificate. A diploma is earned after two years and a degree after three/four years.

IIT Madras has launched an online Bachelor of Science course in programming and data science that offers the flexibility of getting a degree or a diploma. A student must complete all three levels to get a BSc Degree in the course.

On the entry of overseas educational institutes, legislation to allow foreign institutes to open campuses is yet to be passed. So far, global institutes had to tie up with a local partner to set up an India campus.

Close to 200,000 students travel abroad every year for higher education, resulting in an outflow of almost Rs 50,000 ($6.7 billion) crore every year.

As reported by Moneycontrol earlier, the government wants NEP 2020 to be implemented on the fast track across states, paving the way for a wider choice of subjects in higher educational institutes, setting up education complexes and allowing flexible entry-exit schemes in colleges and universities as part of the first phase.

Education minister Pradhan has advised state institutions, including colleges and universities, to implement the policy in the current academic year.

The ministry is also setting up a committee that will be headed by higher education department officials, whose brief it will be to monitor the progress of the 181 tasks.