Financial position of Indian states a worry, but not of the Sri Lankan kind

Sri Lanka's economic crisis has served as a reminder of the harm that too much debt can cause. But to liken the indebtedness of Indian states with that of the island nation is akin to comparing apples with oranges.

The rise in the debt of Indian states, the fast-approaching June 30 deadline – after which the central government will not compensate them for any shortfall in Goods and Services Tax (GST) collections – and pre-state election freebie promises made by political parties fuelled reports this year that bureaucrats were concerned some states could go the Sri Lankan way if they didn't get a handle on their finances.

But the states themselves have been aware of the situation for some time.

This month last year, P Thiaga Rajan – or PTR – was sworn in as the finance minister of Tamil Nadu. Armed with a resume to turn any other finance minister green with envy, PTR wasted no time in recognising the state's biggest headache: its debt.

"We have to take our debt to GSDP (Gross State Domestic Product ratio) back to the 20 percent level. It is now around 25 percent… If debt can be brought back to 18 percent or 17 percent of GSDP, as it was in 2014, then we can say we have done the restructuring of Tamil Nadu's finances," PTR told The Hindu newspaper on May 12, 2021.

"The fiscal situation of the State is in dire circumstances," the paper concluded. "The Covid pandemic has greatly exacerbated the situation and highlighted how vulnerable Tamil Nadu currently is. There are no buffers left. No fiscal headroom that will allow for delay."

Tamil Nadu is not alone. The last two years have indeed seen the finances of state governments take a heavy beating, with outstanding liabilities of all states and Union Territories (UTs) rising to 31.1 percent of their GSDP at the end of FY21 from 26.3 percent a year ago. As per states' budget estimates for FY22, only a marginal rise to 31.2 percent of GSDP was expected last year. 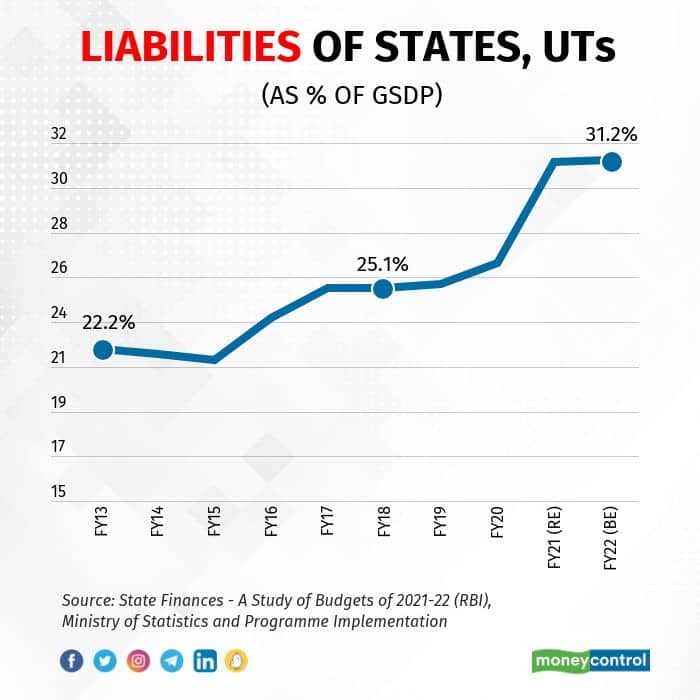 As PTR and the white paper on Tamil Nadu's finances noted, state debt is indeed a problem. But to draw comparisons with Sri Lanka would not be correct.

While elevated debt levels have played a huge role in precipitating the Sri Lankan economic crisis, it is important to keep in mind the nature of this debt: foreign.

Sri Lanka's foreign debt at the end of 2021 was $50.7 billion. While only 17 percent of this was short-term debt, the Central Bank of Sri Lanka's foreign exchange reserves at the end of the last calendar year was a meagre $3.1 billion. This figure had fallen to $1.9 billion by the end of March, with the hit to tourism due to the coronavirus pandemic and an external debt-fuelled political and economic strategy ensuring the Sri Lankan economy has come horribly undone.

Meanwhile, the Indian government has never lost the opportunity to remind its critics that more than 90 percent of public debt is denominated in Indian rupees. Moreover, India's total external debt amounted to $570.3 billion as of June 30, 2021, of which government debt was $106.9 billion.

At the time, the Reserve Bank of India held $610 billion worth of foreign exchange reserves.

Foreign investors can invest up to 2 percent of states' outstanding bonds.

The bottomline is: since India's states do not have to shell out foreign currency for goods and services that come from outside their borders – the presence of a national currency ensures that – and the fact that almost all their debt is in local currency, any comparison with Sri Lanka is a cul de sac. But that does not mean their financial situation is robust. If anything, PTR and his white paper have shown that states must focus on improving their finances.

Which states' finances are placed most precariously?

In terms of the revenue deficit as a percentage of the GSDP, Sikkim and Tripura were well ahead of the others before the pandemic. While Sikkim's revenue deficit amounted to 4.4 percent of its GSDP in FY20, that of Tripura was 4.3 percent.

The next three states are larger in size: Rajasthan at 3.6 percent, Chattisgarh at 2.8 percent, and Andhra Pradesh at 2.7 percent. All in all, only 11 states posted a revenue surplus in FY20. On the income side, state governments are not seeing the sort of growth they would like.

States' own tax revenue as a percentage of their GSDP was higher for just 11 states in FY20 compared to the levels in FY13. Even within these 11 states, the biggest gains were made by the smaller states. One notable exception is Uttar Pradesh. In FY13, Uttar Pradesh's own tax revenue accounted for 7.1 percent of its GSDP. By FY20, this number had increased to 8.0 percent.

Other states have not been so lucky. Madhya Pradesh, Gujarat, and Tamil Nadu have seen their own tax revenue-to-GSDP percentages decline by 150-220 basis points from FY13 to FY20.

One basis point is one-hundredth of a percentage point. In such circumstances, what do the recent state elections and the pre-poll promises mean?

According to Soumya Kanti Ghosh, State Bank of India's group chief economic adviser, the freebies offered were "economically unsustainable" and some states are "living beyond their means".

"For example, Telangana has committed 35 percent of revenue receipts of the state to finance several populist schemes," Ghosh wrote in a report last month.

Of course, states' finances don't exist in isolation, with the central government playing a key role. As PTR's white paper noted, the GST, its structure, and the alternatives to it will be the focus of Centre-State fiscal relations from FY23. But that should perhaps be discussed elsewhere. What should suffice is that while India's states need to sort out their finances, comparisons with Sri Lanka are not appropriate.
Siddharth Upasani
Tags: #debt #Economy #Sri Lanka #states
first published: May 16, 2022 01:25 pm