India’s production of oilseeds is too little to provide for the domestic demand and therefore is dependent on imports.

The average retail prices of edible oils rose to their highest in May with soyabean oil prices climbing to nearly Rs 150 for a kilo and sunflower oil to Rs 170. The prices of both edible oils have jumped around 50% from the levels prevailing when the country was under a national lockdown. Retail prices of other edible oils too jumped. Mustard oil was up 40% to Rs 165 a kilo, groundnut oil climbed 20% to Rs 175 and palm oil by 50% to more than Rs 130 a kilo. Even the humble vanaspati prices soared 40% to Rs 130 a kilo. A similar increase was also seen in the prices of rice bran oil.

While higher prices shocked consumers around the country, the jump was not sudden. Rather, the price rise began gathering momentum over a year ago. Data collated by the department for consumer affairs show that prices rise began to quicken as early as January 2020 and picked up the pace while the country was under a nationwide lockdown. Similar trends were seen in the wholesale prices of edible oils.

Prices climbed even while it was apparent that the area under oilseeds had expanded and output was expected to be higher than the previous year. The total acreage under oilseeds had increased by 18 lakh hectares or 10% during the 2020 Kharif season, aided by the increased availability of labour after migrants workers returned to their home in rural areas. The acreage for groundnut rose 30% increase, and for soyabean by about 7%. Similarly, the acreage under oilseeds in the 2020-21 Rabi season was up almost 4%. Mustard is the primary oilseed grown during the winter cropping season and the area under the crop was up almost 5%.

As was expected, oilseed output rose. According to the third advance estimates of production for the 2020-21 agriculture season, published earlier this week, output expanded by 10% to 365.65 lakh tonnes, with the soyabean crop rising almost 20% and mustard by a little under 10%.

Higher minimum support price (MSP) is also unlikely to have pushed up prices. The annual increase was modest – 4.6% for soyabean, 4.2% for sunflower seeds and 3.6% for groundnut sown during the Kharif season and 5% for mustard during the Rabi season.

Further, demand was muted through most of the year, as eating out was not an option during the lockdown and restaurants were order to shut. Even after the lockdown was eased, very few chose to dine outside their homes and in the restaurants. So, domestic demand is unlikely to have exerted any additional upward pressure on prices.

So, why did prices rise so high even as output increased and demand stagnated?

Blame it on the China factor India’s production of oilseeds is too little to provide for the domestic demand and therefore is dependent on imports. The country is one the largest importers of oilseed and edible oils in the world, about 60% of the domestic edible oil demand is met from imports. Therefore, any increase in global prices of the oilseeds and edible bound is bound to be transmitted into domestic prices. It so happened that the global prices of oilseeds such as soyabean and edible oils such as palm oil experienced a vertical climb in 2020, as some producing nations saw output decline due to weather conditions and pandemic-induced labour shortage and other logistics problem.

The prices of soyabean rose nearly 80% between August 2020 and May 2021. Those prices have cooled a little since then. Soyabean oil prices rose more sharply – about 150% between April 2020 and May 2021. The rise in soyabean prices was led by a rebound in demand from China during the year. China uses soyabean for extracting oil as also to prepare animal feed. Aggressive Chinese buying of soyabean depleted inventories in the US, which in turn put upward pressure on prices. Shortages in Brazil, the top producer and exporter of soyabeans, and delayed sowing in the country due to drought also caused prices to climb. Soyabean prices are expected to remain elevated as China will continue to buy large quantities of the seed in 2021-22.

Sunflower oil prices started rising in March last year. After climbing about 125% by March 2021, prices cooled a tiny bit. Prices continued their upward march as output was hit by drought-like conditions last summer in the Black Sea region countries such as Ukraine and Russia. Ukraine is the largest producer of sunflower seeds and Russia, the second-largest, while India and China are the largest consumers of sunflower oil. Reduction in acreage in Argentina also reduced the total availability of the oilseed during the year.

The increase in palm oil prices was led by three factors – weather conditions, labour shortages in Malaysia and an ambitious biofuel programme in Indonesia. The two southeastern nations are the largest producers of palm oil. Malaysia’s palm oil sector is dependent on migrant foreign workers. However, pandemic induced border closure meant the palm oil sector faced a severe labour shortage, causing the output to fall. In Indonesia, the top producer of palm oil, the biodiesel programme requires fossil fuels to be blended with 30% palm oil. This increased domestic demand for palm oil is expected to keep palm oil prices elevated. 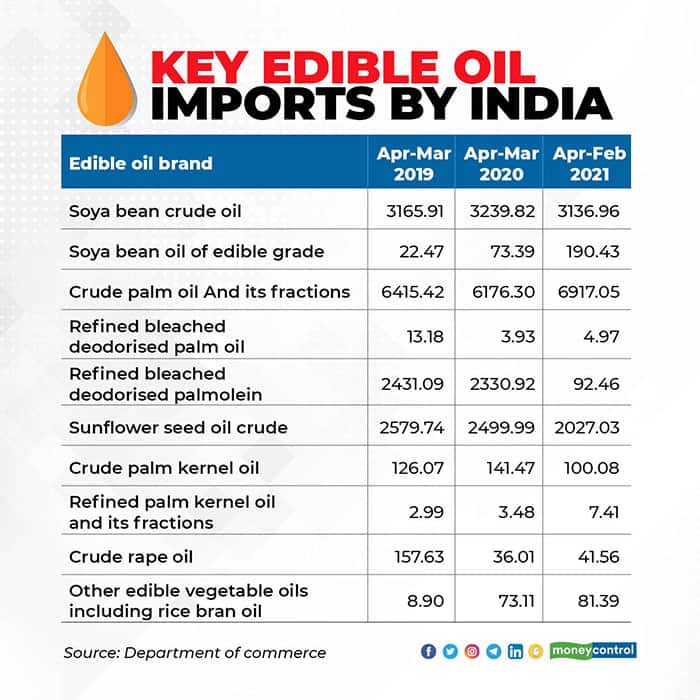 The near secular rise in prices of popular edible oils in the last year is also an outcome of demand substitution. When the availability of a particular edible oil declines or its prices jump, consumers increase demand for alternatives. That increased demand makes the price of the other oils also rise. The US Department of Agriculture sees global oilseed supplies improving in 2021-22 by about 3%, with higher prices incentivising an expansion of area under oilseeds. That may lead to some easing of global prices.

In the near term, edible oil prices are expected to remain firm in the domestic market and consumers might not get much respite unless the Centre reduces tariffs in the short term. In the long term, India needs to reduce its dependence on imports to satiate demand for edible oils. That it can do by incentivising farmers to diversify away from wheat and paddy to oilseeds. What must not be ignored is that edible oils are also experiencing a cyclical rise in prices like many other commodities. And, though their prices are elevated, they are nowhere close to their lifetime highs.