Be a PRO & get up to 50% off on select brands. Explore Now
you are here: HomeNewsBusinessEconomy

As consumption demand rises after a tough financial year, importers are desperate to visit China to stock up on new inventory. Their plans of transiting through a third nation to reach the Big Dragon and India's unique travel restrictions continue to hit a wall. Moneycontrol discovers the long list of hurdles impeding travel - tough vaccination rules in most countries, low availability or lack of approval for Chinese vaccines and the high cost of insurance

Shantanu Garg is a troubled man. This Noida-based distributor of cheap imported electronic goods has been trying to find a way to get into China.

Garg’s needs are desperate. He wants to negotiate much needed purchases for his company as consumption in the Delhi-NCR region picks up, while his inventory has dwindled.

A regular traveler to the Chinese city of Shenzhen, across the border from Hong Kong, Garg used to visit the Huaqiangbei neighborhood twice a year. Known as the world's largest consumer electronics market, it is a hot favourite with Indian importers to source their supplies.

But the global pandemic has cut short his quest, on hold since last December, as he tries, unsuccessfully, to find himself a flight to hop onto.

Currently, China allows foreign travelers on tourist and business visas to enter the country only if they have been vaccinated with one of four Chinese vaccines. Two of these - Sinovac and Sinopharm - have been sold to other countries commercially, or gifted to a few nations, which are in Beijing’s good books. Sadly for Garg, both of these vaccines are not approved for use in India.

For distributors like him, that is bad news. India buys more from China than any other country, with imports estimated at more than $65 billion in 2019-20, while her share of imports has risen to 17 percent in the current financial year. It is the largest source for thousands of industrial products across diverse categories such as pharmaceuticals, chemicals and plastics.

While India Inc has managed to cut deals with their Chinese counterparts, thousands of small Indian importers of consumer products ranging from electronics, machine tools, footwear and even fertilizers, are currently trying to enter China to negotiate business.

And therein lies the problem. Rakesh Jain, Vice President of the Delhi Chambers of Commerce, says that barring a few specific items such as printed circuit boards of a particular make, select types of plastic furniture and certain synthetic chemicals, not many goods in the market have seen a shortage – thus far. But things are bound to change.

"Given the pressures of the market, if our traders can't make their arrangements from China soon, domestic retailers and brands will be forced to source the goods from entities in other nations, even at higher prices. That's a scenario where no one wins," he warns.

The main problem, says Jain, is that importing from other nations like Thailand and Vietnam reduces the cost advantage. In the aftermath of the pandemic, these nations have further raised their average quoted prices. Wholesalers like Anwar Farooqui, a functionary from the West Delhi Traders Association, who deal in many of these items, have good reasons to be apprehensive. "Faux leather shoes from China are the mainstay of roadside stalls at Karol Bagh, often undercutting the prices of cheap shoes from even nearby Kanpur. The trader who negotiates on my behalf in Haining - a leather hub in Zhejiang province - has been unable to visit since last year."

Clearly then, physical presence in China must be considered mandatory. "The extremely competitive margins and old-school way of doing business means importers of various nations try to be first in line at the beginning of every trade cycle for a particular product or have to jostle with each other at mass auctions for Chinese goods. For both of these, our traders need to be physically present in China," a senior functionary of the Federation of Indian Export Organisations (FIEO), said.

After a tough financial year, many traders are desperate enough to source cheap goods, no matter if it entails the added risk of transiting through a third country to get around visa restrictions.

Currently, Indians can take regular commercial flights to only 22 nations, which have signed air bubble arrangements with the Civil Aviation Ministry. However, only a handful of them currently provide Chinese vaccines, in addition to having unfettered air links to China.

Among these, the easiest option is Nepal, which had been promised free supply of Sinopharm by Beijing. However, diplomatic hurdles have meant they haven't arrived yet. Caught between two regional superpowers, earlier this week Kathmandu gave emergency approval to Bharat Biotech's Covaxin.

In early-2021, trade circles were abuzz with rumours about 'vaccine tourism' in the United Arab Emirates, whereby rich foreigners could come in to get a shot of Sinopharm.

Most traders have dropped the UAE option after hearing about the high prices being demanded by agents working for senior members of the royal family who facilitated the jabs.

With the country officially now only allowing citizens and residents to get vaccinated, even those rumours have died down. 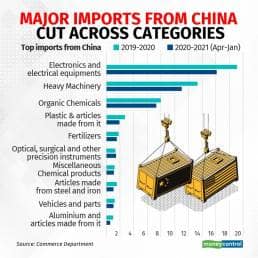 Imports from China cut across categories, encompassing both raw materials and finished products

Most nations now also mandate that foreigners arrive, at least, with a negative test report. That presents another problem. Amit Dubey, founder of Delhi-based Asia Travels, explains what it is. "We have had a rising number of inquiries from businessmen who want to take short trips to China through other nations. We continue to advise against it at the moment since most countries in the immediate Asia-Pacific region with direct flights to China now require an existing certificate of vaccination. But if someone is already vaccinated, they are automatically disqualified from taking another shot in the host country."

Desperate traders have also sought to transit through nations outside India's air travel bubble arrangements. Chief among these is Singapore, which had ordered the Sinovac. But recently the city-state postponed approval for the vaccine due to lack of clinical trial data.

While many traders were comfortable with the strict rule of all incoming international tourists having to take a PCR test in Singapore on arrival, the long quarantine period has spooked many.

In addition, their governments have also stopped giving approval to the Chinese vaccine due to lack of clinical trial data.

Recently Thailand, which has sourced the Sinovac vaccine and has introduced a special tourist visa with 90-days validity, became the cynosure of all trading eyes.

But the scheme comes with a rider - visiting foreigners need to have a cumulative insurance of more than Rs 80 lakh. Along with the high prices for getting the jab, the overall low rate of vaccination in the country has proved to be a dampener.

Despite stories of a few people getting in, most traders concede that the challenges far outweigh the benefits. "I had heard of a special pass for short business visits whereby you can get a jab directly after landing in China. But the Chinese embassy in Delhi is yet to respond to my application," Pravjot Singh, a Mumbai-based supplier of Chinese footwear to domestic brands, said.

Singh is confident he will try the Thailand route in April if the situation doesn't change. However, he is worried that people can’t choose a vaccine of their choice and may end up with the other vaccine Thailand has approved. That is the Oxford-Astrazeneca produced in his home state of Maharashtra by the Serum Institute of India. Clearly, in these troubled times, life is coming a full circle for these forlorn traders.
Subhayan Chakraborty
TAGS: #air travel #China #Covid-19 #imports #India #Nepal #Singapore #Thailand #trade #UAE #Visa
first published: Mar 24, 2021 07:42 pm