In the backdrop of the COVID-19 pandemic, the Fifteenth Finance Commission has likely recommended that India’s combined public health expenditure be increased to 2.5 per cent of gross domestic product by 2023-24, Moneycontrol has learnt.

As a percentage of GDP, this is nearly double of 1.26 per cent health outlay by central and state governments in 2019-20, as per an assessment by Niti Aayog.

In its report for 2021-22 to 2024-25, the Fifteenth Finance Commission (15th FC) has also likely recommended that governments move to a fiscal deficit target range rather than a fixed number, and the creation of a separate central cadre for doctors and medical professionals, to combat the issue of shortage of essential personnel.

The Commission is also learnt to have kept the tax devolution to states at 41 per cent of the divisible pool for the coming five years, unchanged from its recommendations for 2020-21.

India ranks 184th out of 191 nations in terms of healthcare spending as percentage of GDP, as per the World Health Organization.

“While the medical professionals have been at the forefront of fighting the Covid-19 pandemic, it has also exposed the flaws and weaknesses in our public healthcare system. The centre and states need to ramp up their public health spending, and invest in stronger health infrastructure,” said a senior government official who is aware of the 15th FC’s recommendations. 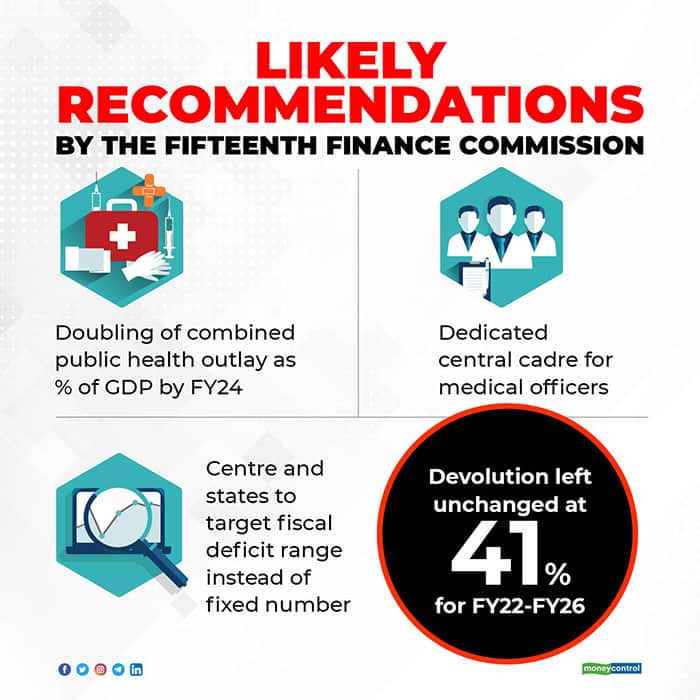 “In order to reach that target, most of the commitment would have to come from the central government, in terms of funding for health sector as well as various schemes," the person said.

The 15th FC had completed its report for the next five years by the deadline of October 31. It submitted its report to President Ram Nath Kovind on November 9. Copies were presented to Prime Minister Narendra Modi and Finance Minister Nirmala Sitharaman.

The 15th FC chairman, NK Singh, has spoken of the need to increase health spending substantially. Now Moneycontrol has learnt he has also put these recommendations in his report.

The government is Constitutionally required to accept the Finance Commission’s recommendations on devolution of the divisible tax pool among centre and states. On other likely recommendations, including on spending on healthcare, the centre can take a call whether to accept or not.

Singh had said earlier this month at an event that there is a need to immediately create a cadre for medical officers through the formalization of the All India Medical Service, given in the Civil Service Act of 1951. This is a point he has made often.

Commenting on the poor and skewed distribution of the healthcare infrastructure in the country, Singh had also emphasised upon the need to immediately broaden the scope of medical courses. He also argued that the government must put in place a regulatory framework for paramedics, in the upcoming session of the parliament, as they have played a critical role in battling the COVID-19 pandemic.
Arup Roychoudhury
TAGS: #Budget #Centre #Covid-19 #Finance Commission #fiscal deficit #GDP #healthcare #states
first published: Nov 23, 2020 07:18 am