Upcoming Event:Join us for New HorAIzon from Oct 6-7, 2pm and be a part of exciting conversations on tech & innovation
you are here: HomeNewsBusinessEarnings

In the long run, the Arysta deal could bring in significant synergies, improve margins and push up UPL in the global big league.

The domestic business topline grew 8 percent YoY driven by volumes uptick from the new product launches. Though the monsoon started on a positive note, the overall situation remained erratic with below average torrential and spatial distribution. This impacted the cotton acreages in major cotton- producing states of Maharashtra and Andhra Pradesh. With substantial exposure to cotton, UPL’s domestic performance was hit in Q2. However, with healthy reservoir levels, the outlook for the upcoming Rabi season seems positive. The management expects a strong performance in the Biologicals portfolio.

Latin America - Latin America, a key operating region for UPL, reported a healthy volume growth. A strong 26 percent revenue growth in the region aided the consolidated growth during the quarter. Except for Argentina where the economic situation remains weak, the company saw a healthy growth in all other LatAm countries it operates in. The fungicides portfolio is now picking up in the region. The company has received several new registrations which would drive growth in the future. The management expects the strong performance to continue in the second half with substantial import opportunities coming up due to strong trade bounds with the US and China.

Europe - A dry season in North Europe resulted in low yields and consumption of herbicides in the region. However, low inventory levels at the start of the quarter helped maintain a decent overall show. Southern European region, however, saw some rains that helped in bringing volumes for fungicides in fruits.

North America – Delayed monsoon in the region coupled with high inventory pile-up at the start of the quarter led to a stunted growth in the region. Dry weather led to sluggish sales of pre-planting herbicides and an inventory build-up that could have a spillover impact on the volumes in the coming quarters.

Rest of the world – The 6 percent YoY topline growth was aided mostly by growth in Africa. Decent rainfall in South East Asia, coupled with new product launches supported the growth of insecticides and fungicides. Severe drought and dry weather impacted sales in Australia.

While the performance during the quarter remained mixed, we expect improvement owing to an attractive line up of product portfolio. Healthy reservoir levels bode well for the upcoming Rabi season which we expect would deliver strong performance. The inventory channels are also clear in most regions and the company has a healthy order book in Latin America. This along with the US-China trade wars would aid the volumes in H2FY19.

In the longer run, we see the Arysta deal bringing in significant synergies, improving margins and pushing up UPL in the global big league. Though we do expect acquisition-related expenses impacting overall margins in the coming terms. 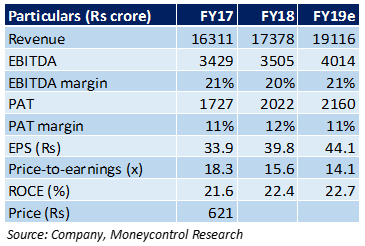 UPL remains a worthy pick given the steep 25 percent correction in the stock since the year start. The stock is trading at a 2019e (estimated) PE of 14x and we believe the stock should be kept on the radar.