The fourth quarter numbers are not reflective of the price hike that ITC undertook after the increase in excise duty, says Naveen Kulkarni of PhillipCapital. Sources on the ground say, this has resulted in further decline in volumes, he adds.

FMCG giant ITC's fourth quarter numbers were a top-down disappointment as the company missed expectations of the street by a wide margin. This marked the company's eighth consecutive quarter of volume decline as far as the cigarettes business is concerned.

Naveen Kulkarni of PhillipCapital believes there are further chances of stock derating. Operating performance-wise, there was a double digit volume decline for cigarettes, which is a significant negative for the stock.

Further, the fourth quarter numbers are not reflective of the price hike that ITC undertook after the increase in excise duty, he says. Sources on the ground say, this has resulted in further decline in volumes, he adds.

According to him, the situation on the ground for the entire FMCG pack is tepid. Kulkarni says the next two quarters are likely to be tricky for ITC. 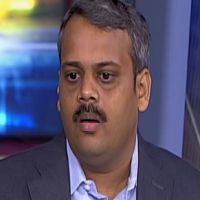 Below is the verbatim transcript of Naveen Kulkarni's interview with CNBC-TV18's Anuj Singhal and Sonia Shenoy.

Anuj: The stock is almost at 52 week lows now. Do you sense that further de-rating is left in the stock?

A: There are chances of further de-rating for the stock. If you look at the operating performance, after a very bad Q3 12-14 percent kind of a volume decline. We had a double digit volume decline in this quarter also there was some bit of expectation of inventory accumulation in anticipation of the Union Budget in the month of February. Even if I were to include that also then there has been a double digit volume decline in this quarter. So, that has been I would say significant negative for the stock.

Sonia: Let us talk about the other business, between ITC and Britannia there has been a big biscuit battle brewing so to speak and we have seen Britannia report some stellar set of numbers. One analyst earlier was telling us that now there is a shift being made from ITC to Britannia because ITC itself is facing a slowdown in the cigarette business. Between the two for a slightly longer term what would your view be?

A: Between ITC and Britannia, these two are not comparable. If I were to look at valuation for ITC it is predominantly driven by the cigarettes business. This quarter the profit number for FMCG others business was just around Rs 50 crore. So, that compared to let us say Rs 2700 crore kind of a EBIT number for cigarettes business is remarkably different. So, these two are not comparable.

Having said that if I were to look at the biscuits segment, for ITC these two companies operate in slightly different segment. Britannia has done well because of the innovation pipeline that they have been able to introduce in last one year. So, that has worked for them quite well. There have been gains of distribution expansion, cost structure management. So, lot of things have been working for Britannia. ITC is a very different play in the overall scheme of things.

Anuj: Let us get back to the cigarettes business, do you see this trend of volume growth being arrested any time soon or should we expect more volume declines now that the price elasticity is well and truly kicking in?

A: If I were to look at let us say Q1 and Q2 base for FY15, the base is still I would say reasonably high. So, Q3 is when the major volume decline happened. Q1 and Q2 the decline is around 2.5-3 percent negative base. On that base we are still looking at a very sharp decline. The Q4 numbers were not actually reflective of the price hikes that they have taken after the hike in excise duty. So, there have been further price hikes in the months of end of March and beginning of April for quite a few brands. So, because of the price hikes that they have taken there has been further decline in volumes is what I am able to understand. Considering what people are saying the situation on the ground is really bad across the FMCG industry not just for ITC but across FMCG industry the situation is really tepid. From that perspective we might see a further decline in volumes in the next two quarters also.

Sonia: What is your view on this stock price now? How much further could it move lower and given the fact that it already trades at 30 percent discount to the rest of the fast-moving consumer goods (FMCG) sector, do you reckon that it could find a base at around this Rs 300 mark or so?

A: That is a possibility that it might find a base in the range or between Rs 280-300 levels, but that is about it. Whether it is an encouraging buy at let us say at Rs 300 levels needs to be seen because operating performance, if it is still not going to improve and thereafter if we see any kind of regulatory interventions let us say a ban on loose cigarette or something or the other which comes up. Then there will be further pressure on the category. So, comparing strictly with an FMCG business of let us say 30 percent discount on a regulated industry is not necessarily very wise, but of course, the whole FMCG pack is also at a very steep valuation. So, there could be corrections in the FMCG pack also, that can also be a case.