Below is the transcript of Kapil Wadhawan’s interview with Menaka Doshi & Senthil Chengalvarayan on CNBC-TV18.

Menaka: You had a reasonable quarter; it is the deferred tax liability (DTL) that hit you a bit. Can you talk us through your outlook for the quarters to come?

A: It is been a good quarter on the back of strong sanctions and disbursements primarily in the tier-II tier-III markets. Our loan sanctions have moved up 19 percent from Rs 5,938 crore to Rs 7,071 crore and consequently disbursements has moved up from Rs 4,030 crore to almost Rs 5,000 crore. The outlook remains extremely positive; the rate cut that we saw yesterday is only going to add to this positive sentiment that we are seeing in the market. We believe that the lower and the middle income segment, primary driven by the affordable housing requirement, will be the core driver for the sector going forward.

Menaka: How long will this deferred tax liability (DTL) issue plague profitability to some extent even though demand and revenue looks good?

A: That has given us a hit in our net interest margins but on over all basis while this is going to continue to be a quarterly phenomena, for the first nine months we have already provided Rs 36.64 crore as DTL. So our profitability is down to that extent. However, on an overall basis 2.77 percent is our net interest margin which is up from 2.7,1 so we will see a small inch up in this margin in spite of this DTL.

Menaka: Will this DTL persist in the next quarter as well?

A: According to me yes, the way the expectation is on growth and profitability you will expect a similar trend going forward as well.

Senthil: At the same level will you be provisioning the same amount?

A: Nearly looks so, it clearly depends on what the last quarter has to say.

Menaka: What is your expectation on rates in terms of what kind of rate cuts you expect to see from hereon and what that will do to your business in terms of increased demand?

A: We have already seen few banks come immediately with announcement of lower base rate after Reserve Bank of India (RBI) cut repo rate yesterday.  So, even though there are still a large numbers of institutions out there which have to follow suite, we expect at least a 25 to 50 basis point reduction in the cost of funding, not immediately but over the next couple of quarters.

Senthil: What is the immediate impact on your margins?

A: It depends on where the cost of funding goes. We are already seeing a small reduction in the cost of funding on the back of a triple A that we got on our ratings. With this interest rate decreased we expect the expansion to continue on the margins front.

Menaka: What kind of revenue growth and margin performance are you expecting in FY16?

A: For FY15-16 we continue with the same 20 percent growth target. Margin performance will be fairly similar to what we have seen.

Menaka: So no dramatic improvement expected in margins at this point?

A: I would imagine it depends on where the cost of funding goes at the end of the day 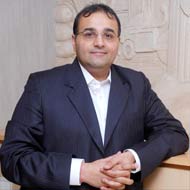