Upcoming Webinar:Join us for 'The Future Techshot' on Sept 22, 10:30am to gain insights into role of tech in streamlining businesses. Register Now!
you are here: HomeNewsBusinessCryptocurrency

Fretting over 30% crash in Bitcoin? Experts say it's a healthy correction, excellent opportunity to buy

"Bitcoin's fall was expected for some time because nothing goes in just one direction. Additionally, we have also seen price rising over 50 percent in a single day, so there is no need to panic," says Siddharth Menon, co-founder & COO at WazirX.

In one of the craziest trades, world's best-known cryptocurrency Bitcoin nosedived as much as 31 percent to $30,201.96 (over the past 24 hours) on May 19, sending shockwaves through the financial world. Other cryptos such as Ethereum, Dogecoin too were in a free fall.

According to a Reuters report, cryptocurrency price declines last week were sparked by Elon Musk's reversal on Tesla accepting bitcoin as payment. "His subsequent tweets caused further confusion over whether the carmaker had shed its holdings of the coin," the report added.

So, is it a sign of worry for crypto traders and investors?

Most analysts opine that volatility is the sole nature of the market and hence there is nothing to be perturbed about. In fact, it's a very healthy correction and market participants should utilise this correction to buy cryptos.

"Bitcoin's fall was expected for some time because nothing goes in just one direction. Additionally, we have also seen price rising over 50 percent in a single day, so there is no need to panic," says Siddharth Menon, co-founder & COO at WazirX.

"It is a healthy correction because $28,000 is a very good support level and $38,000 was Fibonacci support level earlier. The price is still within the limits...the danger zone would be if it breaches $19,000 zone which seems unlikely. We are still in a bull run phase and I don't see the crypto breaking below 24K zone," Menon said further.

Echoing similar views, Avinash Shekhar, Co-CEO of ZebPay, says, “A nearly 40% dip in the bitcoin price from its all-time high looks dramatic but is normal in many volatile markets, including crypto, especially after such a large rally. Such corrections are mainly due to short-term traders taking profits. Long-term value investors might call these lower prices a buying opportunity. Technical analysts would call this a test of the support level around $40,000. Neither type of investor would say that tweets are the underlying cause. Investors should invest in education first. Research the underlying value of Bitcoin, Ethereum, and other crypto assets as you might look at a company’s information before buying stocks."

This shows "the steepest and more sustained liquidation" in Bitcoin futures since last October, they told clients, adding that it pointed to "continued retrenchment by institutional investors", Reuters reported quoting JP Morgan analysts. 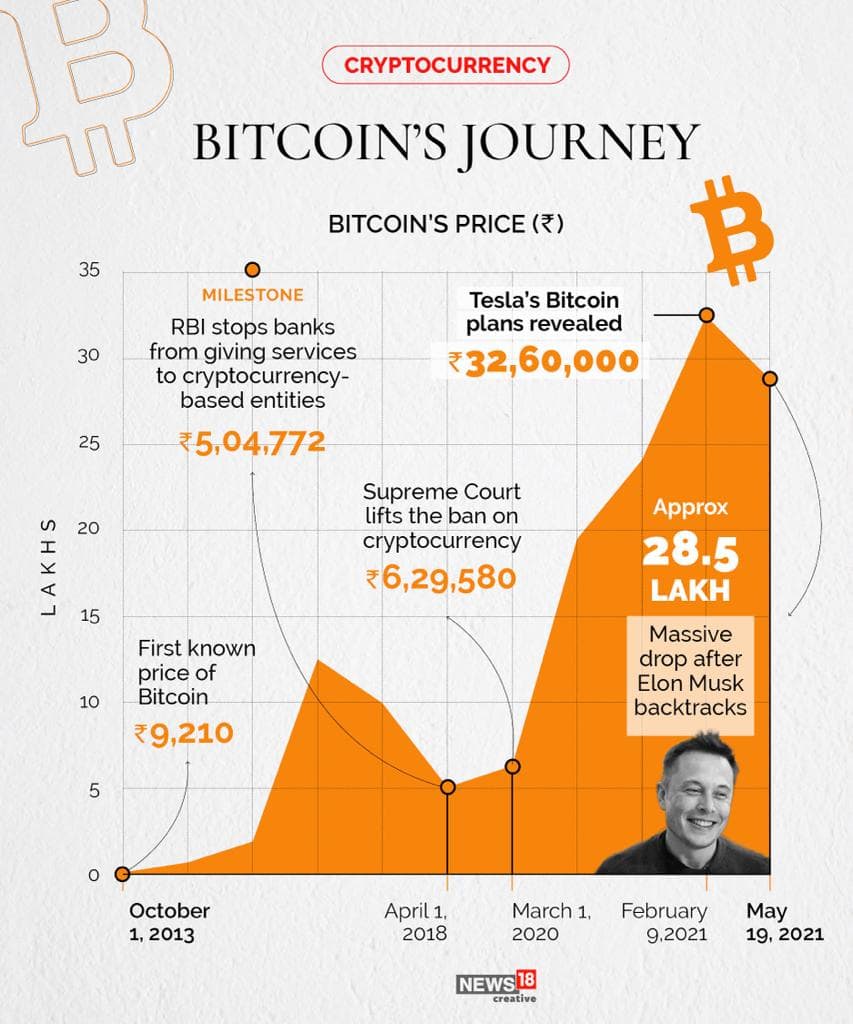 Commenting on the outlook for Bitcoin and Ethereum, Singh opined that weak hands will get shaken out while believers will continue to hold/buy more and over a period of time the coin will recover perhaps even making new highs. However, nobody knows when this will happen and anyone claiming to predict is lying.

Market observers say if you are new to this, stay away. Invest only with money you can afford to lose. Don't speculate, you will lose. Invest and hold long term if you believe in the cause and motivation behind the birth of the crypto, they say. "Only people who focus on educating themselves around Crypto will truly understand how to unlock value if there is any to be unlocked," Singh of LearnApp said.
Swati Verma
Tags: #bitcoin #cryptocurrency #Ethereum
first published: May 19, 2021 08:44 pm