It isn’t that digitization of the financial sector has reached a saturation point. Large financial institutions are increasingly looking inwards to meet the demands of the marketplace.

Considered as a cash cow for India’s IT services companies for long, the banking and financial sector is gradually being weaned off the outsourcing model. The companies are now opting to build and maintain software in-house.

With emerging technologies, such as blockchain, which are touted to play a pivotal role in the financial sector, bankers are keen to keep their cards close to their chest and cut reliance on third parties for technology. India still continues to be the preferred destination for technology hubs though. Many foreign banks have set up global in-house centres (GIC) in cities such as Mumbai, Bengaluru, and Chennai.

The banking domain has been key to the fortunes of Indian IT companies, but the share of the finance vertical in their earnings has been on a downward spiral in the past couple of years. 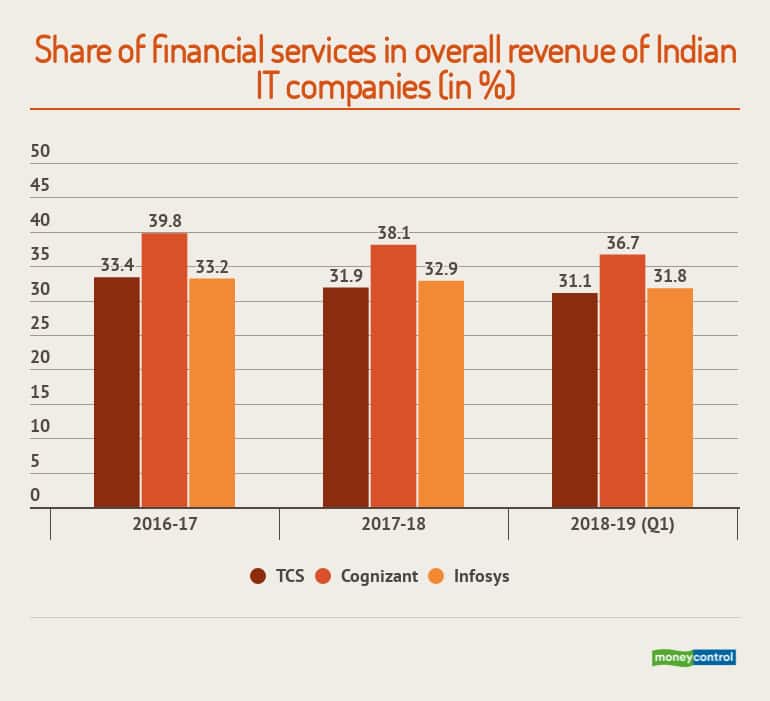 IT firms are diversifying into other domains to compensate for the shortfall in revenue from its traditional stronghold. The overall revenue of TCS grew 10 percent in the previous quarter, while its banking services wing posted only 4 percent growth year-on-year. Infosys and Cognizant posted robust growth of 6.8 percent and 9.2 percent, respectively, in the quarter ended June. But the share of banking and finance remains subdued at 2 percent for Infosys and 4.5 percent for Cognizant.

It isn’t that digitization of the financial sector has reached a saturation point. Large financial institutions are increasingly looking inwards to meet the demands of the marketplace. The COO of Infosys, UB Pravin Rao admitted as much when results for the previous quarter were announced.

HCL Technologies revenue from the sector also dropped by 1.4 percentage points in the June quarter due to clients in-sourcing working. Both HCL and Infosys did not name clients.

Bank of America, Citibank, Deutsche Bank, and UBS rank among the biggest customers of Indian IT service companies. Bank of America spends USD 5 billion annually, with Accenture, IBM, TCS, and Infosys among the major contractors. The software vendors contracted by Citibank include Wipro, TCS, NTT Data and HCL.

Deutsche Bank is the biggest outsourcer of IT, with an annual spend of USD 6 billion, the spoils of which are shared by Infosys, Wipro, IBM, and DXC. Other foreign lenders like Credit Suisse, Royal Bank of Scotland (RBS), and the Australia and New Zealand Banking Group (ANZ) have set up shop in India for in-sourcing technology.

Citibank had hived off its captive business in India in 2008, selling the dismantled unit to Wipro and TCS. But this has not stopped Citi from returning to India with a renewed mandated of cutting outsourcing costs by developing a tech ecosystem from scratch. Sources contacted by the Economic Times estimate that the New York-based bank employs 4,500 people in Pune, with plans to scale up operations by doubling employee count. In addition to Pune, Citi has facilities in Mumbai and Chennai, employing around 16,000 people in all.

Recurring costs aside, banking firms are moving away from outsourcing to differentiate their brand offering. With nascent technological developments like blockchain and internet of Things (IoT) threatening to disrupt the financial services space, banks believe the time is right to ramp up operations and reinvent themselves as technology firms.

Former COO of Deutsche Bank, Kim Hammonds, told Times of India in 2013 that almost 80 percent of the firm’s IT requirement was met by outsourcing. That figure has now come down to almost 50 percent. The Frankfurt-based bank has around 4,500 engineers on its rolls in India.

Denmark’s Danske Bank is another global financial player which has laid down roots in India to insource technology by leveraging the country’s human capital. Deval Shah, who heads the bank’s IT and support service centre in India, told the news daily that productivity tends to improve with insourcing. He added that IT staff of the parent company were likelier to pick up the intricacies of the business when compared to contractor hired on an ad hoc basis. Moreover, outsourcing companies are not drawn to creating alternate work flows involving automation as their earnings would dwindle. Service providers are billed for hours worked per employee on a full-time basis.

A study undertaken by KPMG and IT research firm HFS Research found that only 30 percent of companies were willing to renew existing agreements with contractors. Among the firms polled, 44 percent said they would look to insource or change provider.

Financial companies’ in-house centres are coming of age at the expense of third party contractors. But Indian IT firms do not believe this portends lean years in the future. Many firms including TCS have invested heavily in acquiring expertise in artificial intelligence and cloud computing.

Recently, TCS clinched a USD 2-billion deal with Transamerica in insurance, highlighting the fact that the tap has not been closed on revenue from the financial sector. However, revenue from banking has been gradually dwindling.