Every single customer is satisfied with Dominar and the company expects to sell 10,000 units per month (domestic and export) by March 2018, said S Ravikumar, President - Business Development, Bajaj Auto.

Bajaj Auto's domestic two-wheeler sale was under pressure in the month of June, while export sales fared relatively better but there was still a decline of close to 4 percent. Meanwhile, commercial vehicle sales continue to be weak, in-line with the industry.

The impact of sales in June could have been mainly because of transition to the new tax regime due to which all bikes under 350 CC have seen price reduction in most states and so customers must have postponed their buying for post GST, said S Ravikumar, President - Business Development in an interview to CNBC-TV18. The price reduction were around 2 percent on an average, because it was different for different states, he added.

However, the company in an effort to mitigate the impact on sales tried to price the bikes at post GST rates, he said. Therefore, the domestic retail sales exceeded wholesale volumes by almost 50,000 units in June.

The domestic sales will normalise by August and would likely be around 2 lakh units/month form September versus the 1,24,000 units done in June.

Talking about export numbers, he said although they are better than last year, the company remains cautiously optimistic and watchful. The current run rate is around 1, 30,000 units/month, which could continue for at least couple of months. 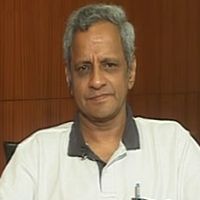 With regards to Dominar, he said every single customer is satisfied with it and the company expects to sell 10,000 units per month (domestic and export) by March 2018. For the month of June, company sold 2000 units of Dominar including domestic and exports.

Reema: 23 percent lower for your total June sales. The domestic sales on the whole declined by 34 percent. Was the month of June weaker than what you were anticipating and what is the extent of recovery we should expect in July?

A: I would say that the transition to this new goods and services tax (GST) regime was big thing the country itself went through. Ours has been largely a product -- all bikes under 350cc actually there is price reduction in most states and this has sort of been digested by the industry. Now from here it should be quite okay, but during transition, the customers obviously would be waiting for a reduction once they came to know about this.

A: As I told you, at the beginning of the year, exports better than last year, but we will be cautiously optimistic and watchful. So, 1,30,000 on average plus, minus is what is the current run rate. We should be able to continue to hold on to that.

This particular month the same story like some of the big east African countries had government actions scheduled for a particular month which was if I remember right it was May, or June and so there has been some pre-ordering in April and May and that will again normalise. However, on a steady state basis 1,30,000 plus is what we are looking at in exports at least for the next couple of months but we would be looking at this month-by-month.

Surabhi: Let me come back to the domestic market then, by when do you expect normalcy to return, what is the normal monthly run rate that we can sort of start looking out to?

A: I would say that now we are getting into the rainy season, typically the low volume months relatively. I think it should normalise by August and we should be looking at something like 2,00,000 units per month from September onwards.

Surabhi: The blended realisation per unit was 62,200, that is in the fourth quarter. With the price cuts that you have taken, where does that number settle?

A: It will have an impact on the blended rates and typically again during Q1 when the marriage season, the offtake for CT and Platina is relatively larger in terms of the weightage in the basket. That would also have an impact, but we have to compare it Q1 to Q1, then I think it will be okay. However, on a sequential basis it is not comparable.

Reema: So let me get the number right. You are saying domestic sales should recover to 2 lakh units by September versus 1.24 lakh that we did in the month of June, right?

Reema: You spoke about price cuts and how you had provided the benefit even in the month of June, what is the extent of price reduction that we have seen for Bajaj Auto?

A: I would say it has been almost about a 2 percent type of a story and that again varies state by state in terms of benefit to the customers and we had to give assurance to the trade as well as to the customers that they are not going to be short-chained.

Had it been a price increase, it would have been a short-term gain, but we welcome this price drop because it would expand the market. So we have managed it through this type of a passing on earlier, because otherwise, what do I do? Do I shut sales for a month, it does not work out that way.

Anuj: A word on Dominar. You could correct me if I am wrong, the feedback that I am getting is that after the initial enthusiasm, it is not translating into the kind of success you thought it will.

A: Dominar, every single customer who has bought that product is absolutely satisfied and we have made subtle difference in the message in the advertising and all that and typically, that product, we expected the pull to be much faster. We now have to recognise, what you have heard from the market, we are also hearing a bit of that.

But, our ground reality is that every single customer who has bought it is super happy. Now this may take some time, but we will certainly get to the numbers that we talked about. It may not be September, it may not be December, it may be by March.

A: That is domestic and export, put together.

Reema: What was the sale in the month of June, domestic and exports of Dominar?

A: I do not have the number but it was low. June was impacted in many ways actually, including the GST and all. I would guess maybe around 2,000 units or so.

Anuj: So for now, of course, as you said, maybe you will look at the market feedback, but for now you will say that it has not lived up to your expectations in terms of sales, I am not talking about the feedback.

A: In terms of short-term expectations, yes, I should agree with you.

Reema: When we last spoke to you, you indicated that FY18, exports will be better than FY17. Now that a month or two have passed since you made that comment, could you help us with how much better would FY18 exports be compared to the prior year?

A: You know me very well, I am not going to put any number to that. In fact I am still saying very cautiously optimistic and we will go month by month on this and we will talk as things happen.

Reema: What would be the market share of Bajaj Auto in the month of June?

A: Not yet compiled that actually. Today is the first day after a couple of days of holidays and all this GST stuff is also there. I hope it is certainly in – because retail numbers wise, because I talked to you about 50,000 plus having been retailed in motorcycles, we hope that it is likely to be better than what it was in May.
Tags: #Bajaj Auto #Business #business news #June auto sales
first published: Jul 3, 2017 12:30 pm