Air conditioners and refrigerators could get expensive by 2.5 percent in the short term because the customs duty on its key component compressors has been hiked to 15 percent.

Duty on shrimp feed in increased to 15% from 5%. Customs duty on cotton raised to 10% from nil. The new Customs Duty structure will be put in place by October 1, 2021.

Imported products such as compressors for refrigerators and air conditioners (ACs), raw silk, spandex fibre, LED lamps, solar lanterns, mobile phones and power banks are set to cost more as Finance Minister Nirmala Sitharaman proposed an increase in the customs duty on a range of items in her Budget 2021 speech.

However, on the other hand, products like gold, silver, nylon fibres, copper scrap and Naptha will get cheaper due to a customs duty cut.

Union Budget 2021 announced a 2.5 percent customs duty on certain mobile phone parts and power banks, while that on gold and silver will be rationalised, the minister said.

All compressors used in manufacturing ACs and refrigerators are imported from abroad. Hence a customs duty hike would directly impact the prices of the finished products.

Mahesh Jaising, National Leader & Indirect Tax Partner, Deloitte India, said that the customs changes are in line with what was expected in two key focus areas. These are ease of doing business by reiteration of the streamlining of customs processes, and Make in India by way of the increase in duties on products/components to boost manufacturing in India.

“These rate changes seem aligned to those sectors where the PLI schemes have been announced, e.g. solar, auto components, mobile parts and steel,” he added.

There was a perception that Imported alcoholic beverages, including gin, vodka, whiskey, scotch, rum and wine would also get expensive because of an imposition of a 100 percent Agriculture Infrastructure and Development Cess. However, industry sources clarified that prices will stay the same because customs duty has been cut to 50 percent.

So, this means that the net duty on alcoholic beverages stays at 150 percent as before. For consumers, this means no price hike in products. 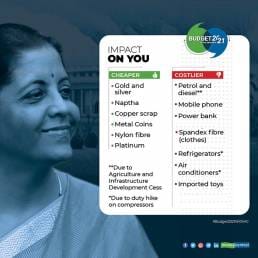 Finance minister Nirmala Sitharaman said that there is a conscious effort to promote products manufactured in India, especially by small, medium and micro enterprises across India.

As part of this effort, the minister said that the customs duty exemption on import of certain kinds of leather will be removed. This, she said, is because these products are domestically produced in good quantity and quality, mostly by MSMEs.

In the automobile sector, auto parts such as ignition wiring sets, safety glass, and parts of signalling equipment will see a hike in customs duty rates if they are imported. Here, the customs duty has been hiked to 15 percent from a 7.5/10 percent range.

On the other side, the budget has proposed to reduce customs duty on certain chemicals and precious metals.

The finance minister said that there will be calibrated customs duty rates on chemicals to encourage domestic value addition and to remove inversions. Apart from other items, Budget 2021 proposed to reduce the customs duty on Naphtha (used in the manufacture of petroleum products, paints and rubber products) to 2.5 percent to correct inversion.

A hike in customs duty for certain chemicals would also lead to a rise in prices for clothes of a certain category. For instance, Methyl Diphenyl Isocyanate (MDI), used in the manufacture of spandex yarn, has seen a hike from zero customs duty to 7.5 percent.

A direct impact of this would be the rise in prices of spandex material clothes, including cycling shorts and other sportswear.

**Due to Agriculture and Infrastructure Development Cess

*Due to the duty hike on compressors

Thrust on Make in India

In the previous budget, too, the minister had hiked the duty on products such as fans, refrigerators, lamps, medical equipment, toys, cigarettes, headphones, ovens and mixer-grinders.

The hike in customs duty is aimed at motivating manufacturers to make these products in India.