Live: LIVE: All About Moving Abroad, Top Destinations For Indians To Settle Overseas | Immigration Central
you are here: HomeNewsBusiness

As demand picks up, top 4 Indian IT services firms double hiring in Q3

The spurt is being driven by clients cutting costs, migrating to the cloud, going in for a digital transformation and the IT services companies hiring more in anticipation of an increase in attrition

The top four Indian IT firms made a net addition of about 36,000 employees during the quarter ended December 31, 2020, more than doubling their recruitment in the previous quarter.

According to executives from the companies, the increased hiring comes at the back of a healthy deal pipeline and robust growth momentum projected for the coming months. 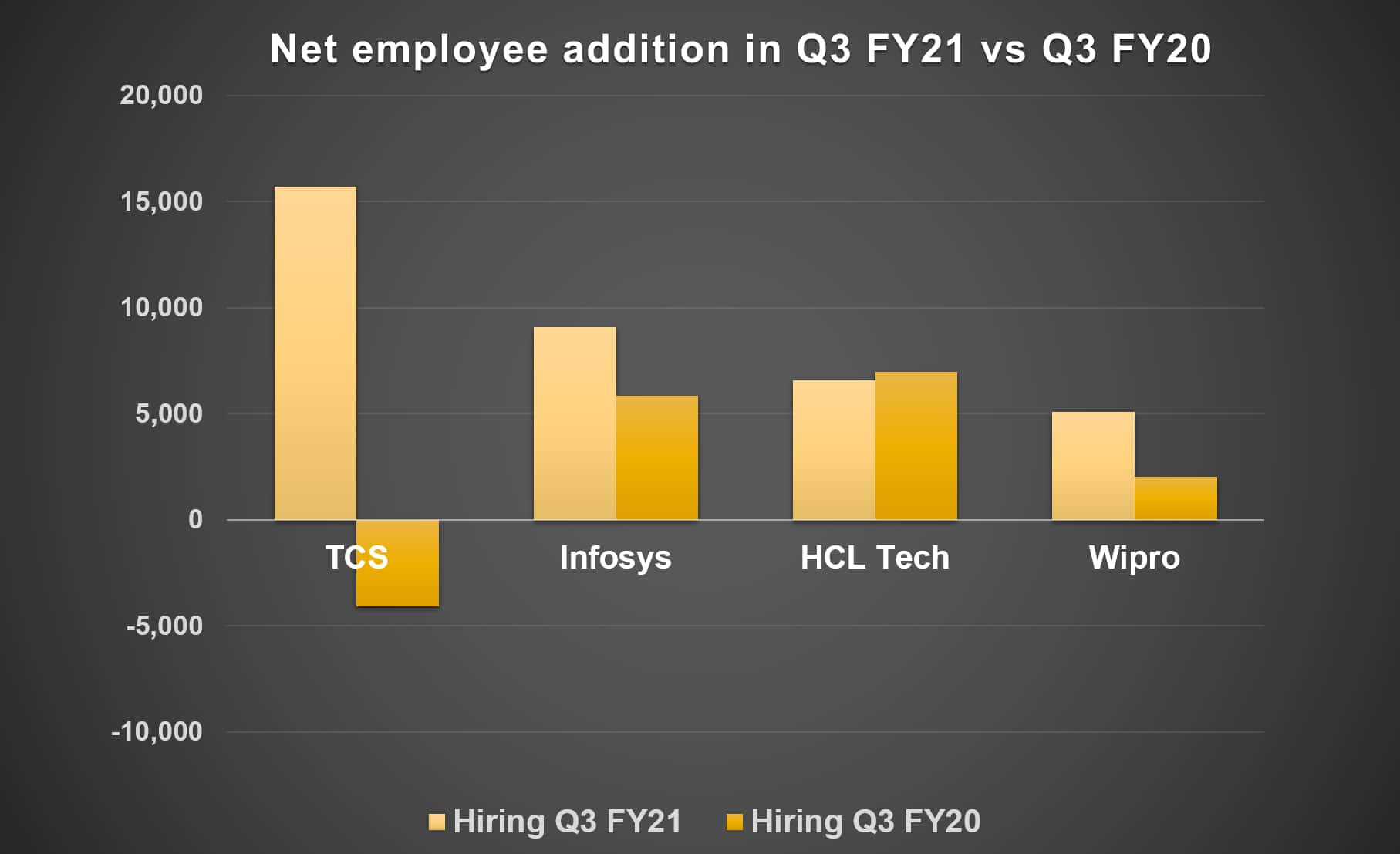 Going by the IT executives’ commentary, hiring will keep increasing for both freshers and laterals.

There are a couple of factors attributing to increase in hiring: cloud migration and digital transformation, and clients looking to cut costs. In addition, the companies are also hiring in anticipation of an increase in the attrition rate.

Migration to the cloud and digital transformation

Demand for technology services has increased as enterprises across the world migrate to the cloud and invest in digital transformation. This is resulting in a huge need for cloud architects, data scientists and cybersecurity specialists.

While companies are able to fulfill the demand internally to some extent, for the rest they will have to hire laterals.

IT firms’ customers are also looking to cut costs by consolidating their vendors and increasing IT outsourcing. This has resulted in the large deal pipelines IT firms witnessed in the seasonally weak December quarter.

Infosys signed its largest-ever deal of $7.13 billion in the quarter that ended in December 2020. TCS signed $6.8 billion in total contract value. While Wipro does not share the total value of deals signed, the company closed a $700-million deal with German firm Metro AG.

IT firms are ramping up hiring, to execute these deals.

At the back of Covid-19, attrition remained low for IT firms but companies expect this to rise in the coming months. TCS’ attrition rate stood at 7.6 percent, an all-time low for the company. Infosys’ stood at 10 percent, up from 7.8 percent in the last quarter. HCL Tech’s was 10.2 percent and Wipro’s stood at 11 percent.

There are a couple of factors attributing to increase in hiring: cloud migration and digital transformation, and clients looking to cut costs

With the market opening up, this number is likely to increase and the companies are ramping up hiring taking this into account as well.

Infosys stepped up fresher hiring to 24,000 for FY22 from the 15,000 it had initially planned. “In this quarter, we have seen tremendous growth. Given the growth momentum we are seeing and high utilisation…attrition can possibly pick up. Considering all that we have increased the fresher hiring to 24,000,” explained UB Pravin Rao, COO, Infosys, during the earnings call on January 13.

This fresher hiring outlook is higher than the 16,500 freshers the firm hired in FY21.

Saurabh Govil, Chief Human Resources Officer, Wipro said during the recent earnings call last week that the company has a robust hiring plan for both freshers and laterals in India and globally. However he did not disclose the number of people the company plans to hire.

Wipro hired 14,000 people, including 2,900 freshers, in Q3. “We are making big investments in Europe and the US as well as the Asia-Pacific and in new technology areas. I can only assure that supply-side constraints will not hold back the growth momentum we are foreseeing,” Govil said.

HCL Tech added 4,022 freshers in the December quarter, taking total fresher onboarding to 6,480. The company will add 5,000 more for the quarter ending March 2021. In an earlier interaction, VV Apparao, the company’s CHRO, said that the company would hire close to 12,000 freshers in FY22 as well, similar to the hiring trajectory in FY21. Prateek Aggarwal, CFO of HCL Tech, said that the company sees a multi-year technology upcycle that would drive growth in the coming years.

TCS has plans to hire 40,000 freshers in FY22, the same as in FY21. “Hiring of experienced professionals is completely dependent on requirements and based on the demand environment. But we are definitely optimistic on the momentum,” said V Ramakrishnan, the company’s CFO, during a recent interaction.
Swathi Moorthy
Tags: #earnings #hiring #IT firms #Q3 FY21 #video
first published: Jan 18, 2021 01:29 pm