In conversation with Mumbai native Chintan Pandya, who won the title of Best Chef in New York State at the 2022 James Beard Foundation Awards.

Chintan Pandya doesn’t believe in pretensions – in life or at his restaurants. Speaking from New York where he’s based now, Pandya often resorts to Hindi phrases to make a point. That unrestrained simplicity reflects in the food at his New York-based restaurants – Rahi, Adda and Dhamaka, which he co-owns with business partner Roni Mazumdar.

Begun bhaja, fried pomfret (a dish Pandya used to eat as bar food in Mumbai), gurda kaporra, macher jhol, ragda pattice and a Meghalayan boiled pig’s head salad arrive in clay pots, pressure cookers and other vessels that they are cooked in.

The straightforwardness has resonated with diner and critics alike, and the result is recognition and a packed reservation book. Edited excerpts from an interview with Chintan Pandya, who won the title of Best Chef in New York State at the James Beard Foundation Awards announced earlier this week:

Dhamaka got to No.1 on the New York Times New restaurants list and now the James Beard Foundation Award for best chef – New York. Did you anticipate this when you opened Dhamaka in 2021?

Never. This is a dream run. When we launched Dhamaka in Essex Market on the Lower East Side, I told my business partner Roni Mazumdar that we will survive if Dhamaka manages to get even 10 percent of the accolades that Adda, our second restaurant, received. Adda was No.8 on New York Times Top 10 new restaurant of 2021.

Then Dhamaka comes along and clinches the No.1 spot on the list in 2022. The New York Times list is the most prestigious for the world of restaurants and was always dominated by western and French restaurants. Adda was the first Indian restaurant followed by Dhamaka to feature on the list. When someone sent me the list, I was driving. I thought it was a joke. I can’t explain the feeling. And now the James Beard Award. So yes, it’s been a dream run.

Perceptions around Indian food have been stuck. Do you think this award will help change that to some extent?

I think it will empower chefs to take more risks. Indian food was never good on its own. It had to be fused with foreign ingredients such as truffle, wasabi or parmesan to make it gourmet. We were ashamed to make real Indian food. This recognition will empower a lot of chefs to believe that simple Indian food can be successful and it can bring you recognition and accolades.

Your company is called Unapologetic Foods.

Yes, and our servers wear T-shirts which say ‘Unapologetic Indian.’ When you go to a Japanese, French of Italian restaurant, you don’t ask the chef to modify the dish according to your taste. Will you go to a sushi restaurant and ask the chef to cook the fish for you? But Indian food is always modified to suit different palates. The first rule at all our restaurants is to never change our food to suit anyone. We serve Indian food that is the best version of the dish. Eat it or leave it – it’s your choice. A lot of people found us rude initially. They said we had to apologise for our spice levels. But I refused. That’s how the concept of ‘Unapologetic Indian’ came about. This is the food I have grown up eating. This is the food I love to eat. Why should I be ashamed of it or apologize for it?

At the awards you thanked Roni Mazumdar for always believing in your ‘idiosyncrasies’ and stupidity. What is most stupid thing you have ever done?

Oh the list is unbelievably long. Let me narrate a recent one. Someone wanted me to plan a special dinner 10 month in advance. He had a few things in mind with regards to chicken and goat. I went ahead and suggested that we actually buy a live goat and chickens and feed them things that the family loves to eat before we butcher them for the meal. That way, we will have the best meat to work with for the special meal. Sadly, the customer scurried away when I shared the cost of the project! But I have not given up on the idea. I am fine-tuning it, though I know it sounds crazy. 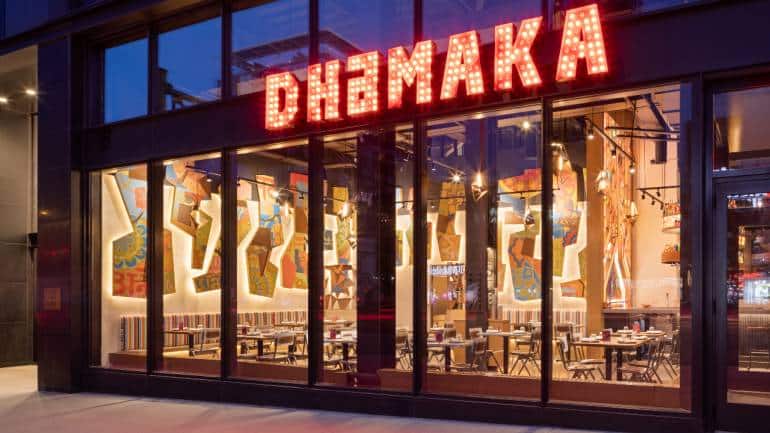 When you started Adda and Rahi what was the biggest misconception about Indian food in America?

Americans believed that if you eat Indian food for lunch, you won’t be eating dinner, and if you ate it for dinner, you would probably have to skip lunch the next day. Too heavy and heartburn were the terms associated with our food. But I don’t blame the consumer for it. Indian food had an overdose of cream and butter. Our mothers never used cream in their cooking. But in restaurants, Indian chefs felt a need to do that. So it’s not a misconception but a reality. Dhamaka doesn’t use cream and butter in the dishes. We only cook in ghee. The concept of Dhamaka is ‘food just like it’s at home.’

Is that also your food philosophy?

There was a time in my life when I was cooking to impress other people. I thought if I made simple food, people would think I am useless. But things changed the day, I realized that I should cook what I love to eat. It changed my entire product. My food philosophy is to keep things as simple and as nostalgic as possible. The food at Dhamaka transports people to some place in India while still being in America. That I think is the real success of Dhamaka.

You are a Juhu boy. What are your earliest food memories?

I am a Gujarati and grew up eating vegetarian food at home. Sunday meal was something we all looked forward to because that’s when mom made dal dhokli (a Gujarati dish of chapatti cooked in a lentil gravy). Gujaratis love ‘chatpata’ food. So bhelpuri, sevpuri, dosa and Chinese food from the roadside stall were a huge part of my life. Rasraj and Guru Kripa in Vile Parle and Shiv Sagar at Chowpatty were favourite haunts. We regularly hosted a lot of out-of-town guests at our home, and it used to be my responsibility to show them around Juhu. After the tour, I would invariably take them to Naturals ice-cream as it was my favourite. And since I was a kid, I never had to pay!

Pressure cooker chicken, goat neck biryani, Champaran meat, doh khleh of Meghalaya, Rajasthani kharghosh (whole rabbit in yoghurt and cloves) - even restaurants in India don’t have these dishes. How did you zero in on the dishes for Dhamaka?

Actually, we were struggling with the menu for Dhamaka when one day my wife casually made a lunch of aloo tindora (potato and apple gourd) subzi, dal and roti for me. She served it in the same kadhai she cooked in. When I had the first bite of that meal, I knew we had to recreate the same experience at Dhamaka – simple food served as it is at home. That’s what is missing in restaurants today. When I was working in India, I used to travel to different places and collect recipes from home cooks and chefs. I put them to use at Dhamaka. You have been a champion of head-to-toe cooking, using goat brains, kidneys, testicles and even pig’s face in your cooking. How do guests respond?

They love it. The first ingredient we experimented with was goat’s brain. It became so popular that every Indian restaurant in New York was serving goat brain and the price of brain skyrocketed from $4.99 to $13.99 in a span of four months. That gave us the courage to go further. We actually have to ration the kidney and testicles (gurda kapura) that we serve or else a week’s portion will fly out in a night! We assume that people don’t want to eat these things but the truth is that they love it.

Most of the dishes at Dhamaka are rustic in a way that they are cooked and served in the same clay pots, cast iron dishes and pressure cookers. How does that augur with the Instagram generation that loves to picture every meal?

We only focus on our product and nothing else. We cook for people who love to eat. This is not a pretentious restaurant. The glasses at Dhamaka are from Ikea and the plates are stainless. Just like at home. We invest in top quality ingredients – our goat meat comes from Arizona, lamb from Denver, rabbit from a farm in Upstate New York and we serve the best paneer in America. In fact we tell people that if they find a better paneer elsewhere, they can bring it to us and we will reimburse the cost of the meal in cash! That’s how confident we are of our ingredients. People are too busy modernizing food and buying $50 plates to serve them in. We don’t do anything to impress people. 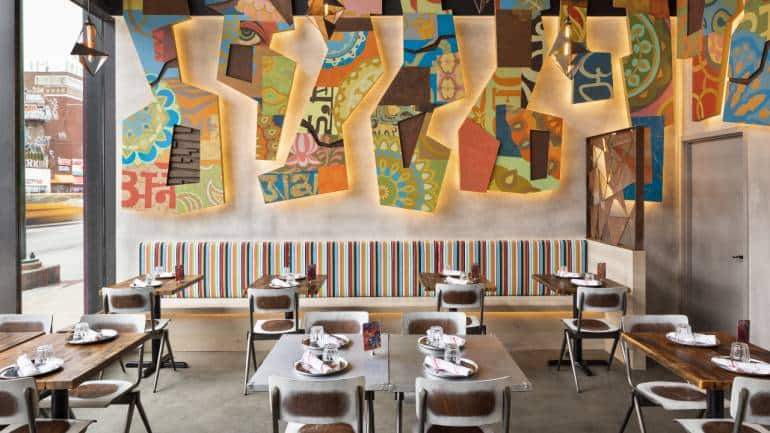 Favourite place to eat in Mumbai?

Konkan Swad in Goregaon. I start with the bombil fry and sol kadi and then launch into the komdi wade, mutton, fish curry…basically everything on the menu.

A meal you can eat anytime

Dal khichdi with kadhi or chaas on a regular day. But if I want to indulge, then it’s olo (Gujrati baingan bharta), bajra roti, white makhan, jaggery and ghee.

Fermentation. Ever since Noma started it, everyone in India wants to ferment everything.

One item that's always in your fridge?

We are coming home. What can we expect?

Khichdi, if I had my way! But you could expect a chaat followed by a biryani and veg kababs.

Favourite ingredient to work with?

I love the character of methi - both the seed as well as fresh and dried methi. We have a dish called paneer methi at Dhamaka which is transformative.

It’s mostly my handwritten notes that I keep going back to. One book I love is On food and cooking by Harold McGee. He’s a food scientist.

They say ‘never trust a thin chef’. Can we trust you?

I am so glad you think that way. I like to call myself pleasantly plump. But I need to go on a diet and train real soon.
Nivedita Jayaram Pawar is a Mumbai-based freelance journalist, who writes on food, art, design, travel and lifestyle.
Tags: #2022 James Beard Foundation Awards #Chintan Pandya #Dhamaka restaurant #Indian food #Indian food in America
first published: Jun 19, 2022 03:45 pm