With a dreamy Insta-worthy setting of gardens and fountains, Chica Delhi serves up an extensive menu of MediterAsian food, complemented by signature cocktails.

Much of the original foliage of the park has been maintained at the Fountain Court of Chica, at One Golden Mile in Central Delhi.

A bright golden sign hemmed by a floral arrangement signals your arrival. An arched pathway, also adorned with flowers, ushers you in to an al fresco setup amid a lush garden with a centrepiece fountain. Reminiscent of an idyllic European courtyard, this is the first of four elaborate settings across 10,000 sq feet of space that make up the newest fine dining address in town. A magical experience from the get-go, Chica then sets out to woo the gourmand in you with a selection of signature drinks and a handpicked menu of Mediterranean and Asian dishes.

Up until a year ago, Chanakyapuri in Central Delhi, with its numerous embassies and diplomatic addresses, had a serious dearth of fine dining and drinking options outside of the five-star hotels that call the neighbourhood home. Then earlier this year, things began to shake up for this diplomatic enclave.

At what was once an obscure public park with a musical fountain, an experimental kitchen serving smoothie bowls and other healthy fare was set up, followed by the first-ever international iteration of Cosy Box, the official food partner of the Cannes Film Festival. One Golden Mile soon became the hottest new dining destination in this part of the city, a reputation that was only cemented by the arrival of Chica here a month ago. Much of the original foliage of the park has been maintained at the Fountain Court of Chica, which features a white three-tiered marble fountain and wrought iron outdoor furniture arranged around numerous trees. A row of cabanas lines the back wall, but these have been upgraded with soft green-hued iron arches and plush seating for a luxurious dining experience.

The glass-roofed Boutique is a beautiful exclusive spot within the garden for larger groups or private parties. Along the original musical fountains of One Golden Mile is another al fresco setup, this one more laidback and informal.

Even in the peak of Delhi summers, visitors might Chica prefer to sit in one of the outdoor areas, given their picturesque ambience and dreamy vibes.

But for those who would rather dine in airconditioned interiors, the Dining Room presents a sophisticated space with soft pastel walls and blush pink upholstered furniture. The piece de resistance here is the central chandelier, made of 250 pieces of burnt glass in shades of rose, sage and white, which add a touch of timelessness to the ambience. 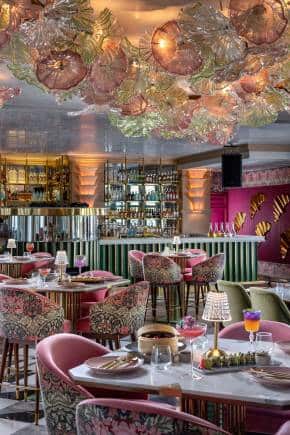 Inspired by the stories of samurais and the journeys of sultans, the menu at Chica draws on Asian and Mediterranean cuisines. The list of dishes is pretty wide ranging and navigating the menu—from sushis, baos and dim sums to pizzas, burgers, flatbreads and lava stone grills—leaves you spoilt for choice.

After much deliberation, we started off with an assortment of dim sums. While the coriander chilli oil chicken dumplings weren’t much to write home about, the smoked pork gyozas were juicy with just the right hint of smokiness. The truffle mushroom and cream cheese dumplings, on the other hand, were little umami flavour bombs and are highly recommended. 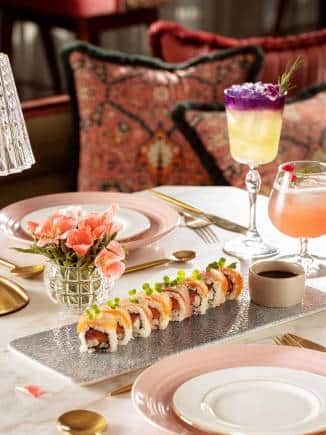 From the Small Plates selection, we tried the Mediterranean spanakopita—baked spinach and goat cheese phyllo served with sundried tomatoes on a bed of bathua labneh. The sogginess of the phyllo, though, marred what could’ve been a top dish in terms of presentation and flavour. However, the Thai style tiger prawns that came next made up for it; we couldn’t fault the lava stone grilling on the prawns and the underlying Thai curry flavours shone through just perfectly.

The burger section looked tempting, especially since the burgers at Chica are served in challah breads—a slightly sweet Jewish braided bread that’s been gaining a lot of traction on social media lately. But we decided to give the burgers a miss and settled for a pita flatbread instead; a decision we did not regret! The Kinky Pork flatbread was rolled thin, baked to perfection and came loaded with parma ham, salami, chorizo, pepperoni and bacon bits—an ultimate feast for meat lovers. Like the food offerings, the drinks menu too is exhaustive and features an impressive selection of signature cocktails and wines. Among their more innovative concoctions, the gin-based Purple Rain and the vodka-based Chilli With Me are must-try, especially if you like to surprise your palate with unusual cocktail flavours, such as curry leaves, Thai chilli or starfruit. Overall, Chica’s signature cocktails are bold with an element of surprise, as familiar flavours are reimagined with unique MediterAsian ingredients. Happily buzzed and well fed with a few misses and many hits, we rounded off our evening with a Baileys Tiramisu, served ‘pull me up’ Chica-style, where the server adds a dash of liquid nitrogen smoky drama tableside before pulling up the plastic sheet and allowing the tiramisu to flow in a mass of cocoa and coffee goodness.

For those in Central and South Delhi and even those who’d like to venture here from farther away, even just to check out the buzz around One Golden Mile or for a serious night of partying and fun, Chica is a hot—and definitely pretty—new place to be.