Dr Thakor G. Patel, retired captain of the US Navy’s medical corps and founder of the Sevak Project, is on a mission to train rural healthcare workers across four states in India.

Dr Patel says this from his experience of running the Sevak Project in India and Guyana since 2010. Under the projects, local ‘sevaks’ are trained in basic health screening and testing blood pressure and sugar levels, checking sanitation and promoting health education and immunisations. They are the first point of health support and prevention of chronic disease for villagers.

Dr Patel is now looking to replicate the model elsewhere in South Asia. “It takes just two years to train a high-school graduate to become a physician assistant. This arrangement benefits everyone, especially the local people, who don’t have to travel for miles for basic healthcare needs,” says Dr Patel. He currently serves as an adjunct associate professor of medicine at the Uniformed Services University of the Health Sciences in Bethesda, Maryland.

Born in Nairobi, Kenya, and educated at Sherwood College in Nainital, India, Dr Patel studied medicine at Baroda Medical College before moving to the US. There he did his internship and specialisation in nephrology (kidneys). He and his paediatrician wife both joined the US Navy in 1976. “The idea was to serve in the navy for two years; it wound up being 23 years,” he chuckles.

Having served as medical director of Portsmouth naval hospital, he was transferred to Washington DC to develop plans and policies for the practice of medicine for all classes of navy ships. He was also in charge of the US Navy’s two hospital ships, Comfort and Mercy. These are 1,000-bed hospital ships recently deployed as Covid hospitals at New York and Los Angeles, but have also been used worldwide for other humanitarian efforts.

But the most important role he played – the one which served as a model for his Sevak Project years later – was being director of independent duty corpsmen in the US Navy. “These are medics. They start off as 18- or 20-year-old kids. We train them for a year in healthcare and put them on ships. On some of these warships, they are the sole provider of healthcare for over 300 people. And they do an outstanding job,” he says. “This is very important, not only for the US Navy, but as a model for developing countries worldwide. I thought, if those guys can do it on a ship, I can do it in an Indian village,” he adds.

After retirement, Dr Patel conducted a study in Tamil Nadu and Gujarat, and learnt how each PHC served seven or 10 villages, and it was not feasible for villagers to travel so far away for basic healthcare. He also found that hypertension and diabetes are very common problems, and that in rural India chronic diseases contribute to an estimated 53% of deaths, which are preventable with proper screening and timely treatment.

After mulling over the problem for two months, he came up with the Sevak Project. “At first, we proposed to educate one individual in one village in each of Gujarat’s 26 districts in clinical medicine, sanitation and lifestyle modification. We used a shortened version of the curriculum of the naval corpsmen. This ‘sevak’ would screen the village population for diabetes, hypertension, chronic diseases, and immunisations. In case of serious symptoms, the patients would be referred to PHCs or even district hospitals,” says Dr Patel, who joined the Department of Veterans Affairs in Washington DC as the program director for renal diseases, diabetes and oncology after retiring from the US Navy.

In early 2010, he approached Narendra Modi, then the chief minister of Gujarat, and presented his idea over a one-on-one meeting in Ahmedabad. “Mr Modi was very down-to-earth and asked me to go ahead. He said I didn’t need permission for a philanthropic project like this,” says Dr Patel. “So, I told him, let me take a picture with you and I will use it as my permit.” 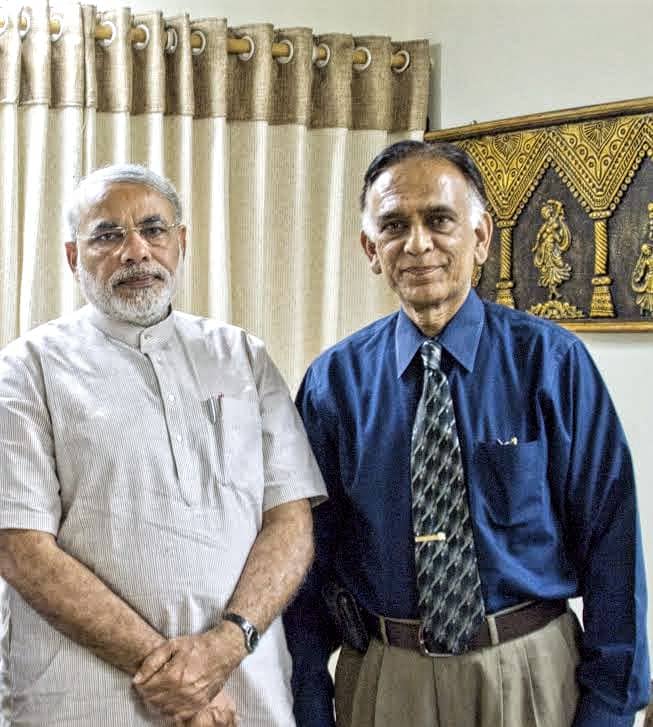 This was the picture Dr Patel used as his 'permit' to set up the Sevak Project.

The Sevak Project got underway in July 2010, with funds for training and screening devices raised by Dr Patel through his family and friends in the US and around the world. These funds and equipment were channelled to India through Bharatiya Seva Samaj, an NGO in Gujarat, run by Kirti D. Patel, who is now the general manager of the Sevak Project. The sevaks are trained by the staff of Baroda Medical College. Not only are they equipped with blood-pressure machines and glucometers, they also have temperature guns, oximeters and TouchHB devices to monitor haemoglobin levels and screen for anaemia.

Over time, their work has expanded to setting up toilets and RO plants for drinking water, supported by WHEELS Global Foundation, USA, and Habitat for Humanity India. They have also installed a plant to manufacture sanitary pads employing local women, and sewing centres in two villages to skill local girls who were forced to stop going to school as senior secondary schools were located too far away.

During the Covid pandemic, the team provided food and ration to villagers with special needs, such as widows, orphans and those who had lost their livelihoods due to lockdown. “Being locals, the sevaks have better relationships with the villagers and end up becoming community leaders over a period of time. A couple of them even got elected to the panchayats,” says Dr Patel, who is a Master of the American College of Physicians. The Sevak Project is now present in over 120 villages in four states: Gujarat, Bihar, Odisha, and Tamil Nadu. Dr Patel (blue shirt) is seen here talking to villagers covered by the project.

The Sevak Project is now present in over 120 villages in four states of India (Gujarat, Bihar, Odisha and Tamil Nadu) and has expanded to 10 villages in Guyana in South America. They are now attempting to set up the model in the Rann of Kutch, a large area of salt marshes spanning the border between India and Pakistan, where income levels are severely low and public-health facilities are practically negligible.

“If any NGO on the other side of the border in Pakistan wishes to join hands, we can support them with the training,” Dr Patel said at an online meeting on June 6 organised by South Asia Peace Action Network (SAPAN), bringing together physicians from across South Asia and the diaspora. The aim of the meeting was to discuss the formulation of a healthcare charter for the region calling for improved healthcare budgets, independent public health institutions, and advanced emergency medical response systems.

Dr Patel says that the Indian diaspora and the educated elite of India must do their bit in raising the living standards and livelihoods of the rural poor. “Tell me one thing that the IITs have done to improve the life of a single villager,” he challenges. “When these IIT graduates come to the US, they find all kinds of solutions, so why can’t they do the same in India?”

He also believes Indian billionaires have not done enough to sponsor academic institutions nor fund scientific research, the way the rich do in the West. As an example, he says, “One of the biggest causes of rape in rural India is the lack of toilets. How hard is it to come up with pre-fabricated toilets for setting up in rural areas? Why isn’t this the number one priority for the public and private sectors?”

Dr Patel praises India’s rural tiered healthcare model (of primary health centres, community health centres, and district hospitals) as being one of the best in South Asia. “PHCs are stocked with all the vaccines, TB medications and leprosy medications. After we appealed to Mr Modi to also stock blood pressure and diabetes medications, within six months, those were made available in PHCs as well,” he says.

At the same time, he believes corruption and absenteeism is a major obstacle, and a lot more can be achieved by training and educating local bodies and sarpanches about health-related laws, immunisation, and government-funded health programmes such as free insurance.

“The educated have to take responsibility for the uneducated. Instead of bringing talent from the city to the villages, you must upskill and train people in the villages to take care of their own healthcare needs. This will stop migration from villages to cities, and improve rural living standards,” he says, adding that India’s burgeoning youth population must be skilled and trained to expand its healthcare capacity, whether as nurses, assistants, technicians, ward boys or in the allied health services.