Upcoming Webinar:Join us for webinar on Building portfolio with active funds at 5pm today. Register Now!
you are here: HomeNewsTrendsFeatures

International Olympic Day 2021 | With 1,500 artefacts and 1,000 videos, The Olympic Museum in Switzerland is an archive of human achievement in sport

Tokyo Olympics 2020 is scheduled to be held between July 23 and August 8, 2021. On International Olympic Day (June 23), here’s a peek into The Olympic Museum in Lausanne, Switzerland.

The Olympic Museum in Switzerland opened to the public on June 23, 1993. (Photo: Preeti Verma Lal)

On a lakeside quay in Switzerland’s Lausanne-Ouchy, four bronze men are holding a flag adorned with five rings. Standing on a pedestal by Lake Geneva, the hands of these bronze men are raised towards the sky. Behind them, water gurgles out of a huge white wall on which is emblazoned a name: The Olympic Museum (Musée Olympique). The only museum founded by the International Olympic Committee (IOC), it is often described as the world’s largest archive of Olympic artefacts.

Before stepping on the black stairs that bear the dates and names of all those who have lit the Olympic flame since 1936, it is the Sculpture Park that beckons. Numerous sports-themed works of art are scattered around, including Auguste Rodin’s The American Athlete;  Niki de Saint Phalle's Les Footballeurs; Altius, a tribute to pole vault by Lucien Wercollier, a Luxembourgish sculptor; and a kinetic art sculpture by the Swiss sculptor Jean Tinguely which combines a hockey stick, a boar's head, and a motorbike wheel.

Eight white pillars inscribed with the names of the summer and winter Games as well as of the presidents of the International Olympic Committee (IOC) lead to the museum’s entrance. On the right is the eternal Olympic flame where the Olympic anthem is played daily at noon.

Founded at the initiative of the IOC President Juan Anotnio Samaranch and opened to the public on June 23, 1993, The Olympic Museum has nearly 1,500 artefacts spread over three floors: The Olympic World (Le monde Olympique), The Olympic Games (Les Jeux Olympiques), and The Olympic Spirit (L’esprit Olympique).

A circular walkway leads to the first floor that narrates the beginnings of Olympic Games in Greece and the effort of Baron Pierre de Coubertin to revive the Games. Artworks from antiquity as well as interactive displays let the visitor relive historic moments of the ancient Games.

The second floor is dedicated to Olympic athletes and their equipment. More than 1,000 video clips tell the stories of games and athletes. Models of Olympic stadiums in various host countries are also on display.

The Olympic Spirit floor offers a peek into the Olympic Village, how the participants live and train, what they eat, what they carry in their bags. Visitors can try their hand at a few aspects of training for Olympic Games like balancing, reaction times, and strength. This floor also displays the various kinds of medals that have been awarded since 1936. Fascinating facts add to the spirit of the Games. For example, in 2012 London Olympics, 10,500 athletes from 204 countries consumed over 100 tonnes of meat, 80 tonnes of seafood, 232 tonnes of potatoes,  75,000 litres of milk, 25,000 loaves of bread, 21 tonnes of cheese.

Among the notable displays are the shoes of Jesse Owens who won four gold medals at the 1936 Olympic Games; Nikes used by Carl Lewis at the 1984 Los Angeles Games; Cathy Freeman’s (gold medal 400 metres at 2000 Sydney Games) shoes; one of the first Olympic flags from 1913; IOC President Juan Antonio Samaranch’s stamp collection; Pierre de Coubertin’s personal objects that reveal the multiple facets of the man as an athlete and sports leader. 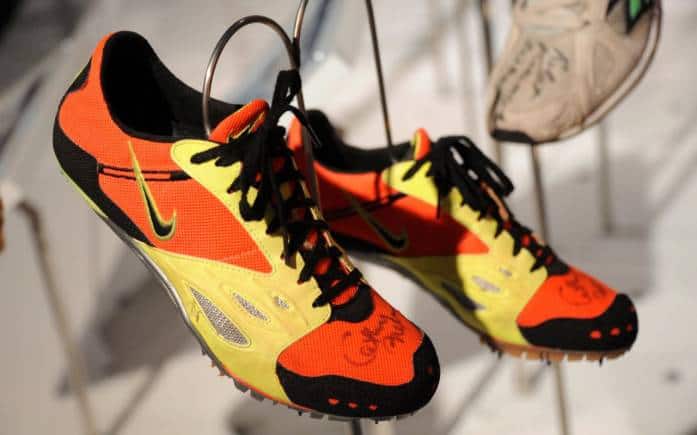 The Museum also has a collection of 800,000 photographs, the first dating from the 1896 Games in Athens; 47,000 hours of audiovisual content; and sound collection that contains 8,500 hours of recordings mostly dedicated to the IOC institutional meetings.

One of the current temporary exhibitions is the installation Tokyo 2020: Sport X Manga (until November 21, 2021) that examines Japanese pop culture, and how sport and Manga have influenced each other.

To mark the 2021 Olympic Day, the committee also recorded a workout video with 23 Olympians to promote an active lifestyle. The do-along video comprises a 26-minute, warm up-to-cool down, no-equipment workout.

Before stepping out of the Museum, head to the 100-metre track by the Olympic flame and try sprinting like Usain Bolt, the fastest man on earth. Pay heed to the light-beam simulator that will tell you the incredible speed of the Jamaican runner. You might huff and puff, falter and fall but never forget the Olympic motto: Faster, higher, stronger.