Having acquired the skills to make soaps using goat milk, the women of Jawar village in Khandwa today enjoy a stronger socio-economic status and supplement the income of their families.

A tractor and a crop-cutter stand at the entrance of the Ajeevika Mission building opposite Jawar's panchayat office. (Photo by Mohammad Asif Siddiqui)

The Ajeevika Mission building opposite Jawar's panchayat office is a nondescript structure except for the striking presence of a tractor and a crop-cutter at its entrance. Therein lies a story—of how women have empowered themselves by acquiring skills and transforming their village and their own lives through the art of making soap.

It all started when National Rural Livelihoods Mission (NRLM) assistant block manager Priyanka Arya visited Jawar some three years ago. Arya was on the lookout for women who were articulate enough to organise other women in the village into groups. That was when she met Vandana Barkhane. Arya saw through Barkhane's long ghunghat and found potential in her. That was how with the initial 10 members, the first women’s self-help group, the Shivshankar Livelihood and Self-Help Group (SHG), was formed, with the aim to organise women from lower and lower-middle-income families and train them through microfinancing facilities for suitable livelihoods.

At that time, most women in the village were confined to their homes, with the patriarchal setup preventing them from ever venturing out to make a living. But once the Shivshankar SHG was established, many other women came forth to become part of similar groups. Thus, in a short while, several 10-member SHGs came up in the village. Today, there are 32 such groups in a village of almost 5,500 people, all of which are coordinated by Barkhane.

Once the women banded together, they embarked on several schemes to improve their lot. One such scheme involved taking a loan of Rs 12 lakh, part of which was used to buy a tractor and crop-cutter, both of which now occupy the pride of place in front of the Ajeevika Mission building. These machines were meant to be made available at reduced hourly rates to farmers in the village for agricultural work.

Meanwhile, once the SHGs were formed, experts were summoned from Jabalpur by District Panchayat Chief Executive Officer Nanda Bhalave Kushre to train the women in the manufacture of soap. The training concluded only two months ago, but the women here have already mastered the technique. The three-day workshop imparted training to 15 women belonging to five different SHGs and involved teaching them how to make herbal soaps from goat milk under the government’s Skill India Mission.

Currently, the women buy goat milk from milk dealers in the village to prepare the base, adding glycerine, charcoal and essence as needed. They manage the packaging, while the district panchayat markets the product and gets the orders. Money earned is credited by the panchayat to the bank accounts of the women involved in manufacturing the soaps.

From earning almost nothing in the past, each of these women now makes Rs 4,000 to Rs 6,000 per month from soap-making. This has ensured an important status for them in their respective families, while making them a lot more ambitious regarding the well-being of their children. Many women have since admitted their children in private schools and become upwardly mobile in several respects.

Although the venture is in its initial stages, the women are already making waves. When taken on a tour by NRLM and panchayat officials to apprise folks in other states about the achievements under the NRLM, their work so impressed audiences that they received bulk orders from Nagpur and Hyderabad. Lately, they also received orders from Nashik. Vandana Barkhane, who coordinates the working of more than 30 self-help groups in Jawar village, Khandwa. (Photo by Mohammad Asif Siddiqui)

Besides empowering the women economically, the major achievement of the NRLM has been in changing their status within their respective families, while making them socially adept.

Take the case of Barkhane, the local Ajeevika Mission chairman, who belongs to a lower-income home. Part of a joint family, Barkhane, like so many other women in her village, was a homemaker. Joining the Shivshankar SHG saw her initially sell manure from the dung of cattle and goats her family herded for a living. Once initiated into soap-making, she embarked on a new phase in her life. Having been the initiator of the first SHG in her village, Barkhane now coordinates all the other SHGs here, too.

Similarly, Nisha Sen was a typical Jawar homemaker, unable to step out of her home. All she could manage was to take up some tailoring jobs to supplement her family income. Joining the Radha SHG two years ago opened up a whole new world for her. Since she never needs to spend more than 4-5 hours making soap at the Ajeevika Mission, her family does not object to her using her newly-acquired skills to add to their income.

The story of Laxmibai Kailash is another such example. When she lost her husband Kalam, Laxmibai was compelled to resort to manual labour to make ends meet. Joining a SHG gave her access to microfinance and enabled her buy a winch machine on a Rs 20,000 loan to make a living crushing sugarcane. Initially, she ran the shop herself, but later got her son to run it. Thus, she could also spare time to get trained in soap-making and earn a fair income to contribute to the family kitty. 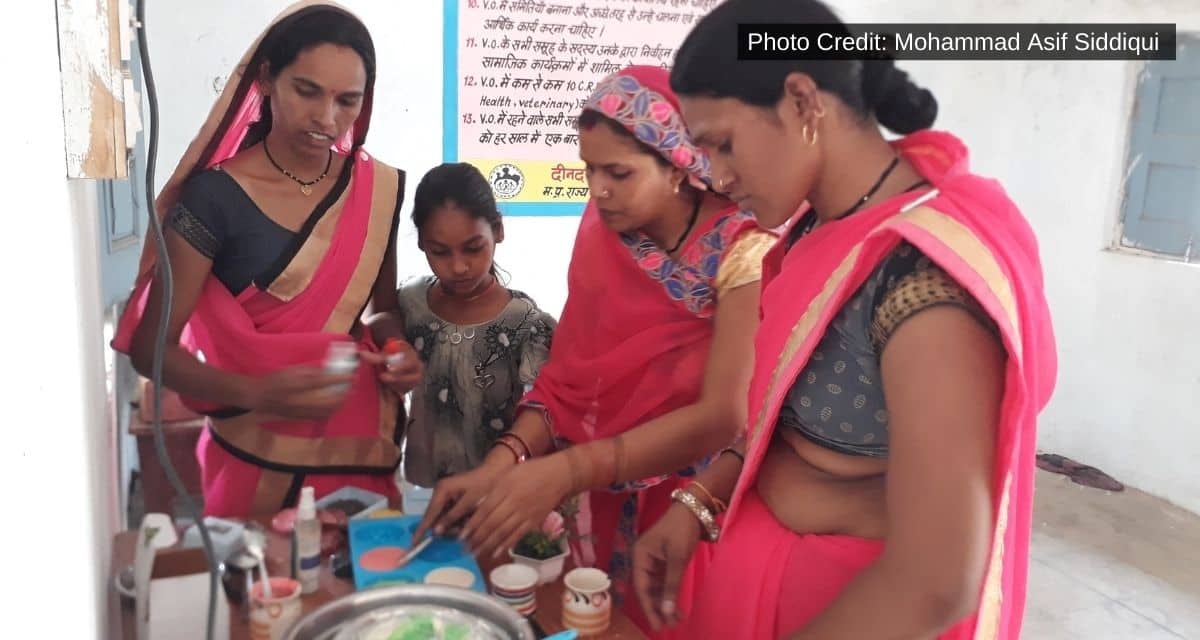 So far, 15 women across five SHGs have received the training. (Photo by Mohammad Asif Siddiqui)

Being involved in the manufacture of soap and other SHG-promoted activities by women has also ensured improved incomes for the women’s husbands and families, whether they be herders or farmers. Farming families could rent the tractor and crop-cutter at low rates due to the women’s SHGs.

Similarly, when the women embarked on soap-making, they needed a regular supply of goat milk. This meant a regular market for its sellers. Families like those of Barkhane and one Pooja Pal benefited immensely.

Pal, who was initiated by experts into soap-making, and is an active member of the Jai Mata Di SHG, told 101Reporters: “We have four to five goats of our own. Considering our uncle and cousins, our extended family has 40 goats and several buffaloes.”

Barkhane, who belongs to a family of goat rearers, has also ensured a regular income for her kin.

Incidentally, the 80 per cent subsidy through the NRLM, income generated by selling the soaps and hiring out the crop-cutter and tractors to farmers has helped the women begin repaying their loan, as well.

It is early days yet, but if the progress made over the last few months is any indication, the NRLM is on to brighten and embellish the drab lives of rural women, courtesy a plethora of colourful soaps. 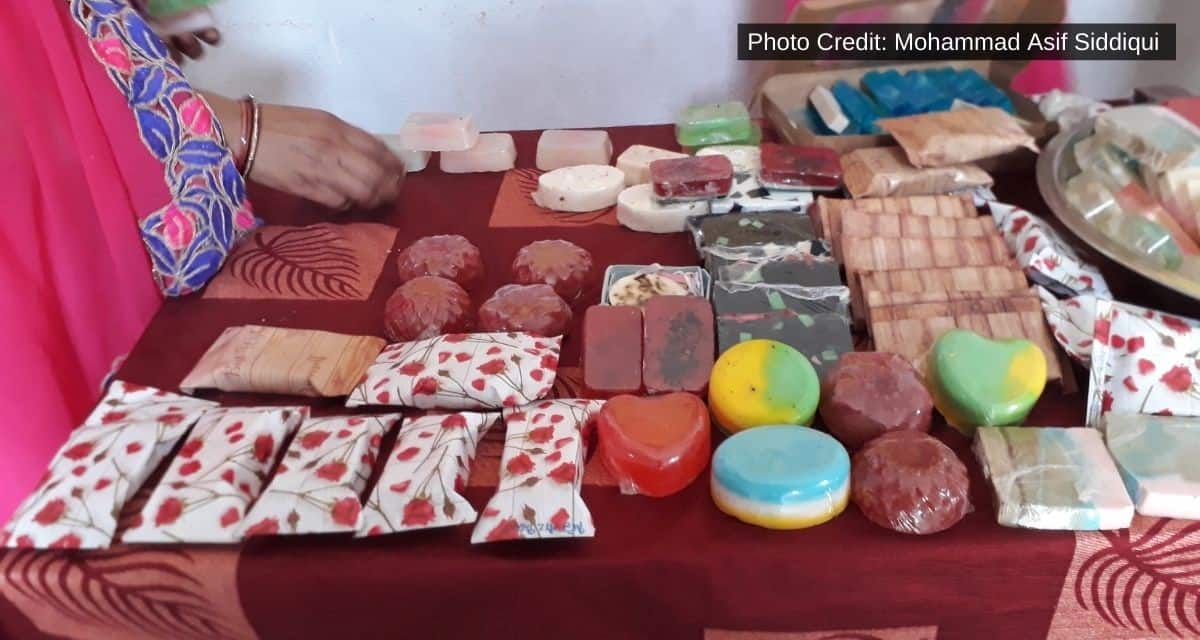