Tamil offering Ponmagal Vandhal starring Jyothika, the film that had first sparked the controversy regarding direct OTT releases will now premiere first on Amazon Prime on May 29.

After announcing the release of Amitabh Bachchan and Ayushmann Khurrana-starrer Gulabo Sitabo on June 12, Amazon Prime is now offering more direct-to-digital releases on its platform.

Over the next three months, Amazon Prime will offer exclusive films from Bollywood to south content.

Shakuntala Devi starring Vidya Balan will release on the platform. The release date is yet to be announced. The film is based on the life of mathematician Shakuntala Devi who was also known as the human computer. The film is directed by Anu Menon and produced by Sony Pictures Networks Productions and Vikram Malhotra.

Tamil offering Ponmagal Vandhal starring Jyothika, which had first sparked the controversy regarding direct OTT releases, will now premiere first on Amazon Prime on May 29.

There are a slew of new regional releases that Prime Video is offering on its platform. This includes Keerthy Suresh-starrer Tamil-Telugu venture Penguin will stream from June 19, Kannada film Law from June 26 and French Biryani, another Kannada film, from July 24.

The release date for Malayalam movie Sufiyum Sujatayum, which will also premiere on Prime Video, is yet to be announced.

According to Gaurav Gandhi, Director and Country General Manager - Amazon Prime Video India, it will give a large global release footprint to the newly-announced films that have skipped the theatrical release.

The platform has deep penetration in India, with viewership across over 4,000 towns and cities. Its worldwide reach is in more than 200 countries and territories.

The release of films like Gulabo Sitabo or and Nawazuddin Siddiqui-starrer Ghoomketu on Zee5 has led to a debate on whether or not producers should look at releasing films directly on OTT. This will impact the exhibition industry, already hit hard due to the coronavirus outbreak and halt on film shooting due to the lockdown.

On May 14, multiplex operator Inox issued a statement against the direct-to-digital release announcements, saying that the deviation of production houses from the globally-prevalent content windowing practice was alarming and disconcerting. 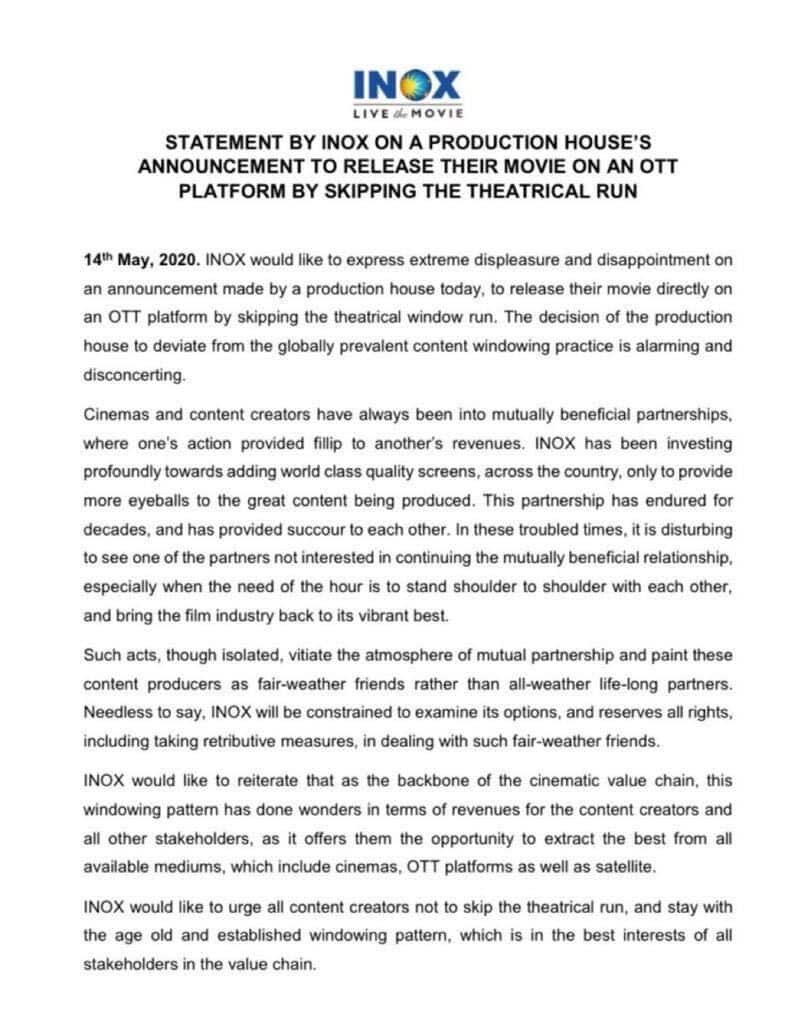 “As the backbone of the cinematic value chain, this windowing pattern has done wonders in terms of revenues for the content creators and all the other stakeholders, as it offers them the opportunity to extract the best from all available mediums, which includes cinemas, OTT platforms as well as satellite,” INOX said in a statement.

While exhibitors have been expressing their disappointment regarding decisions on direct-to-digital releases, trade experts are of the opinion that such a move will not impact the theatre business whenever they resume operations.

Film and trade business analyst Girish Johar has urging all industry players not to call it a war as these are desperate times.

In the long run, OTTs can never be the sole major revenue pie. Cinemas will never be out of fashion. Cinemas bore the brunt during VCR, DVD and satellite days. Now. it is OTT. But, cinema has always come out winner, Johar tweeted.