Xiaomi’s Mega Launch event hasn’t concluded just yet. And if you thought it couldn’t get any better than the Mi 11 Ultra, here’s the Mi Mix Fold. The Mi Mix Fold is Xiaomi’s first attempt to foray into the realm of foldable smartphones.

First off, the Mi Mix Fold has an 8.01-inch OLED panel with a 4:3 aspect ratio with a WQHD+ resolution. The OLED panel supports Dolby Vision and HDR10+. The display has a peak brightness of 900 nits. The large display has a ton of productivity tools such as split-screen, multi-screen drag and drop, parallel windows, Desktop mode, AI meeting assistant and many more.

For the external display, Xiaomi has opted for a 6.52-inch AMOLED screen with an 840*2,520-pixel resolution. The external display features a 90Hz refresh rate and 180Hz touch sampling rate. It has a typical brightness of 650 nits and a wide aspect ratio of 27:9. Like the interior display, the external screen also supports HDR10+, Dolby Vision, and excellent colour calibration. Xiaomi claims that the interior display is the largest in the industry. The Mi Mix Fold adopts a U-shaped hinge design that is 27 percent lighter than the hinges used in other foldables. Xiaomi also says that the device has undergone 200,000 bends during its reliability test and up to 1 million bends in extreme reliability testing.

In its release, Xiaomi said that the chip is a product of two years of development and RMB 140 million in R&D investment. It adds, “this chip provides exceptionally high performance while occupying low CPU and storage space. This enables it to service an improved 3A algorithm and low-light focus capabilities for more accurate autofocus, auto exposure and auto white balance, significantly improving image quality.” Additionally, the phone also uses the world’s first Liquid Lens technology in the telephoto camera. It is made from a flexible film filled with transparent liquid. It uses a precision monitor to change shape like the lends in the human eye. This new technology allows the lens to adjust its optical magnification ratio from 3x to 30x zoom (80 mm equivalent focal length at the wide end).

There’s no word on stabilization, but the new telephoto lens uses an 8 MP sensor. The main camera on the Mi Mix Fold has a 108 MP sensor with a 7P lens, while the ultrawide 13 MP shooter has a 123-degree field of view.

In terms of performance, the Mi Mix Fold is powered by a Snapdragon 888 SoC paired with up to 16GB of 3,200 MHz LPDDR5 RAM and up to 512GB of UFS 3.1 storage. The foldable phone also has an improved cooling system that comprises a large vapour chamber, thermal gel and multiple layers of graphite sheets. For the battery, the Mi Mix Fold opts for a 5,020 mAh battery that is split into two 2,460 mAh cells. It supports 67W wired charging support, but no wireless charging. 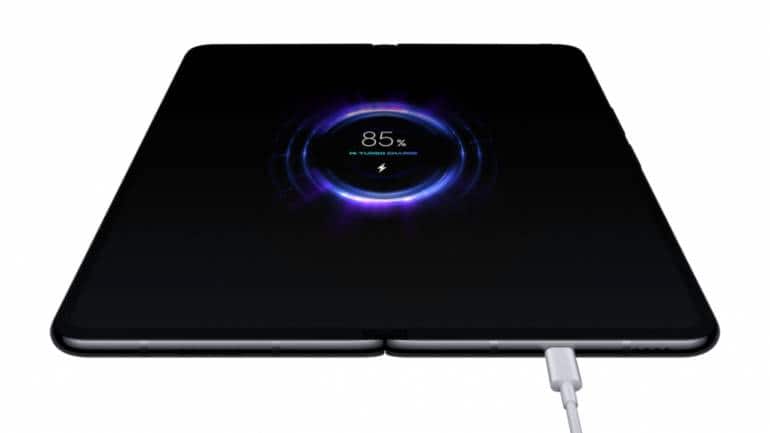