Realme X2 review: Is this the best value for money smartphone under Rs 20,000?

Planning to buy the Realme X2? Read our review before you decide

Realme had a busy year with multiple smartphone launches ranging from the entry-level Realme C2 to its flagship killer Realme X2 Pro. The company, however, focused a lot in the mid-range category by launching multiple smartphones with some solid specs on-paper.

The Realme XT, one of such many mid-range smartphones launched by Realme, garnered a lot of attention and praise for being India’s first 64MP quad-camera smartphone that offered good performance as well.

However, fans and enthusiast complained about the smartphone offering a Snapdragon 710 SoC instead of the Snapdragon 730G processor that offers better graphics and gaming performance.

Realme, being Realme, launched one more smartphone as a more powerful version of the Realme XT called the Realme X2. The smartphone launched at the very end of 2019 comes with the latest set of performance specifications within the budget.

The Realme X2’s performance unit is probably the only area with significant changes. Realme X2 is the only smartphone under Rs 20,000 to get powdered by a Qualcomm Snapdragon 730G.

Keeping the complex figures and data aside, what you, the consumer, cares about is day-to-day performance and gaming on the Realme X2. One of our complaints while playing PUBG on Realme XT was frame drops even on the highest settings. That seems to have been fixed on the Realme X2.

The more powerful Snapdragon 730G processor on the Realme X2 did not show us any signs of frame drop. The game loads on ‘HD’ graphics and ‘High’ frame rate, and is said to get ‘HDR’ graphics soon.

Not just PUBG Mobile, but even Asphalt 9 and Call of Duty Mobile ran smoothly on the Realme X2 during our review period. We didn’t experience any kind of lag or frame drop while playing either of the three games. When it comes to heat management, the device did tend to get slightly warm, which is normal while playing such memory-intensive games. RAM management on our 8GB RAM variant wasn’t an issue either. Apps continued to open from where we left them in most cases, except this one time when PUBG Mobile restarted after switching from Instagram.

The Realme X2 comes packed with the same 4,000 mAh battery found on the Realme XT and many other Realme smartphones. However, to refuel the battery quickly, Realme X2 ships with a 30W VOOC 4.0 Flash Charger within the box.

On average, the smartphone took between 70-75 minutes to charge completely from zero to 100%. The device did get warm sometimes while using the phone for gaming, but that is a combo we wouldn’t recommend anyway. The fully-charged battery will easily last a full workday, even when playing games for a couple of hours.

In case you are wondering, the Realme XT ships with a 20W VOOC 3.0 Flash charger out-of-the-box.

Realme X2 features the exact-same rear camera setup found on the Realme XT. There is a 64MP Samsung GW1 primary sensor, paired with an 8MP 119-degree ultra-wide lens and two 2MP sensors for portrait and macro photography. We noticed that Realme X2’s camera software tends to oversaturate the reds in an image compared to the other colours.

Another thing that we noticed is the loss of detail in the images where you could see the ground or the corners smoothened out, especially in lowlight conditions. Other than that, the output from the rear camera setup is pretty much the same as the Realme XT.  Check the Flickr album below to see some camera samples of the Realme X2. 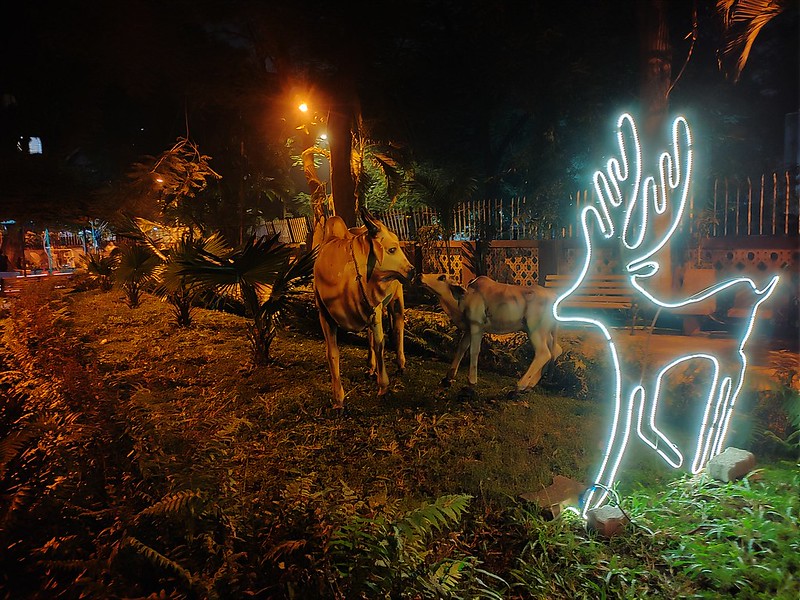 The camera UI, upfront, highlights three options above the shutter button — Video, Photo, and Portrait. Other options like the ‘Ultra 64MP’, ‘Nightscape’, ‘ Expert’, etc., can be found in the side menu. We would have appreciated Realme had they added the ultra-wide option in the same toggle as the 1x,  2x, and 5x digital zoom options. Even the ‘Ultra macro’ mode is located on the side menu, which may be difficult to find if you are a new Realme user.

A new colour and everything else

From the front, the Realme X2 looks exactly the same as the Realme XT (Review). It is the rear panel with a ‘Pearl Green’ colour of the Realme X2 that could probably help you distinguish between the two. The rear panel has a glossy finish, which is also known to be best-friends with fingerprints and smudges. We would recommend putting on that transparent case coming with the phone to avoid wiping the rear panel again and again. Another reason to use a case is to avoid the X2 from wobbling when kept on a flat surface.

The 6.4-inch water-drop notch display has a Full HD+ resolution that when coupled with an AMOLED panel, offers sharp images and vibrant colours with a check on the contrast and brightness levels. The screen does come with WideVine L1 certificate for streaming video content in the highest resolution. However, Realme X2 misses out on HDR support, currently found only on the Redmi K20. 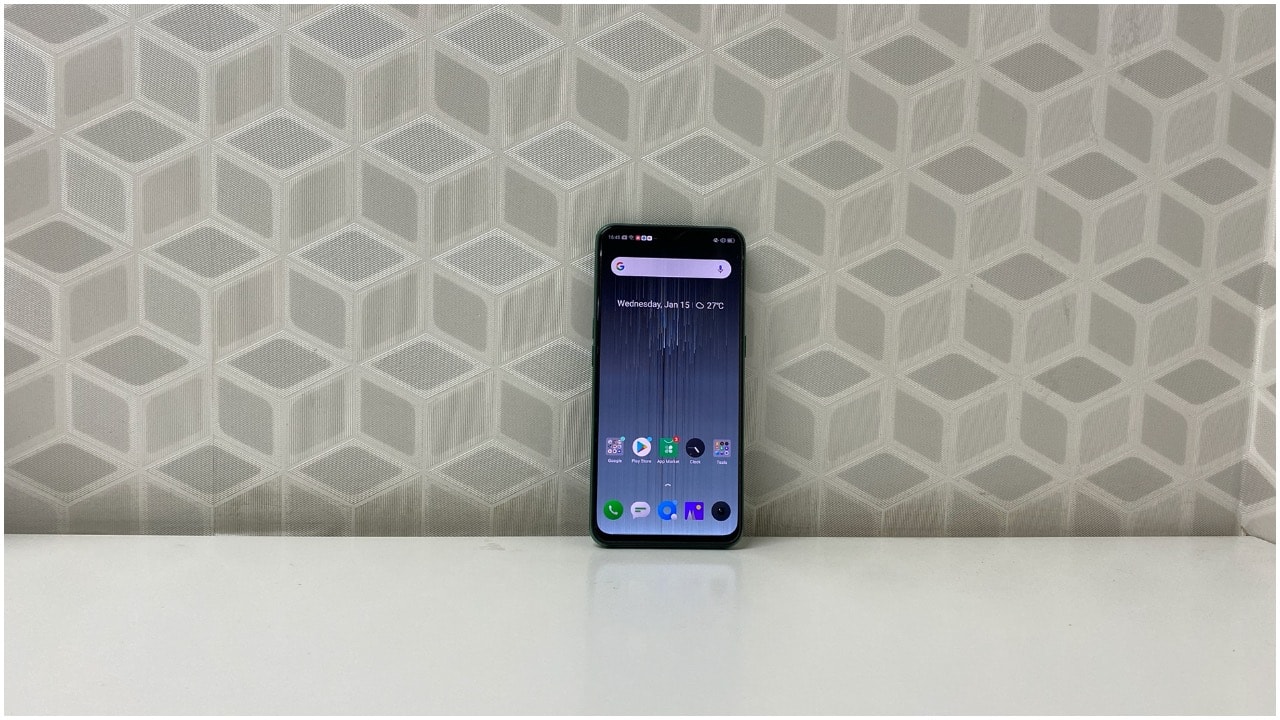 There’s Corning Gorilla Glass 5 protection on the front and back. The in-display fingerprint scanner was, in most cases, quick to read and unlock the device. There’s also face unlock that is super fast, but of course, not as reliable when it comes to security.

Software-wise, Realme X2 ships with Color OS 6.0.1 out-of-the-box. Realme has promised that the X2 will get Realme’s own UI soon. As per the claims, Realme UI will offer a cleaner UI with near-stock Android experience. Currently, the software comes with pre-installed apps and bloatware, some of which can be deleted. What’s annoying is that frequent notification spams by system apps. Also, Realme has gone the Xiaomi-way and introduced ads in its UI. However, unlike its Chinese counterpart, users can disable ads by going to Settings > Additional Settings and disabling the ‘Get recommendation’ toggle.

Should you buy the Realme X2? We would definitely recommend the Realme X2 if your budget is under Rs 20,000. For Rs 1,000 extra, the smartphone does offer better features than the Realme XT.

In case you are a Realme XT user, there’s no point upgrading to the Realme X2 unless you want a better gaming-spec smartphone. However, the biggest competition for Realme X2 is not the Realme XT, but Xiaomi’s Redmi Note 8 Pro. The smartphone features a MediaTek Helio G90T chip which is a gaming-dedicated processor. Unless you don’t mind those unpopular ads and notifications, Redmi Note 8 Pro can be thought of before making the purchase.

For stock Android experience, Nokia 7.2 and a bunch of Motorola smartphones like the One Action can be your best smartphone under Rs 20,000. However, these smartphones, comparatively, come with inferior specs on-paper.