Realme Pad Review: Plugs the budget sized hole in the tablet market but with a few asterisks

While there are many things that can be counted as a negative when it comes to the Realme Pad, the price at which its offered at renders most of them mute.

As per a report by Statista, Apple had 31.9% of the tablet market in the second quarter of 2021. In second place was Samsung with a 19.6% market share. Those numbers seem lopsided in favour of Apple but if you go back to the first quarter of 2013, Apple's 40% market share was the last time they were dominant.

Don't get me wrong, they still are but Samsung and by extension, Android has been slowly clawing away at the lead. When Apple started it absolutely dominated the market with a 61.5% market share in 2011.

You may ask yourself then why is it we hear so little about the Android ecosystem when it comes to tablets? To be blunt, there really isn't much here to speak of. Apart from a flew flirtations in the space like the well priced Nexus 7 or the premium Nexus 10, Google has largely given up on producing tablets. The Pixel Slate is more of a hybrid laptop with ChromeOS than a tablet.

So it has now fallen to third-party manufacturers to fill the void. Samsung has been dabbling in and doing quite a good job in that category but their tablets are more premium and priced accordingly. The rest of the Android family have produced tablets that disappointed with either underpowered hardware or they have released flat-out bad products.

There is then a big gulf in the ecosystem between the high-priced premium tablets and the budget minded ones. A perfect spot to introduce a product to make a splash in the category. That is what Realme aim to do with the Realme Pad. 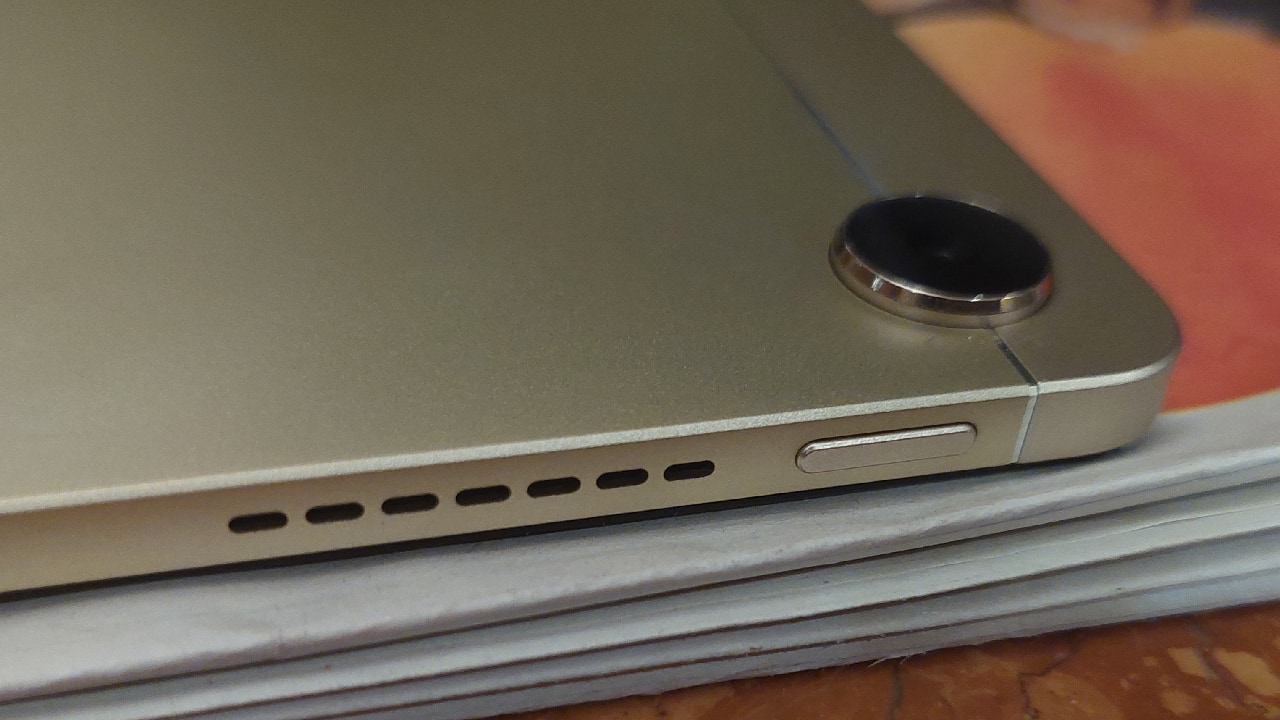 For a first generation tablet, Realme has gotten almost everything right when it comes to design. The Aluminium alloy chassis feels really good to hold in the hand. It's sleek and understated with a premium look that punches above its price range.

It's slim on the edges but it does have some weight to it when you hold it in hand. If I were to nit-pick, I don't particularly like the placement of the headphone jack in the corner. It puts undue stress on your headphone wires and it would have been much better to either put it at the top or bottom of the chassis.

One thing that could certainly use some work are the large borders around the screen. The bezels are strong with this one but to be fair, other tablets don't really get any better in the Android space unless you are talking about premium ones like Galaxy Tab S7 Plus by Samsung. On the Apple side of things, Bezels get significantly worse on the iPad 9th Generation, which is the company's cheapest option. The rest of Apple's line-up is noticeably better but then you are paying a lot more at that point.

Overall, Realme Pad has a design that is sleek and suave, punching well above its price range when it comes to look and feel. Things can only improve from here.

The power button is positioned on the top right of the chassis and there is a volume rocker to the right side. The selfie camera is placed in the centre to the right side of the screen bezel. This means if you hold the tab in portrait mode, you are going to flip it to landscape to take a selfie.

The Stereo Speaker array has two speakers each positioned on the top and the bottom. They support Dolby Atmos and get really loud, enough to fill a small room on their own. They have decent bass thump as well and seem balanced without sounding too tinny. Realme also has Dolby sound pre-sets in the settings for you to play around with.

At the bottom is the USB Type-C port. Strangely, Realme has not announced a single accessory for the tablet and have confirmed that the display does not support stylus input.

Realme has also omitted fingerprint authentication from the tablet, so you are left with face unlock or one of the other methods provided on Android by default. Unsurprisingly, it just isn't as fluid as it could be. It requires a large amount of light to even register your face - I had to turn on nearly every light in my room to get it to work - and flat out refuses to work most of the time unless I turn the brightness on the display to maximum. To give it the benefit of the doubt, maybe my room is just too dim even with all the lights turned on. 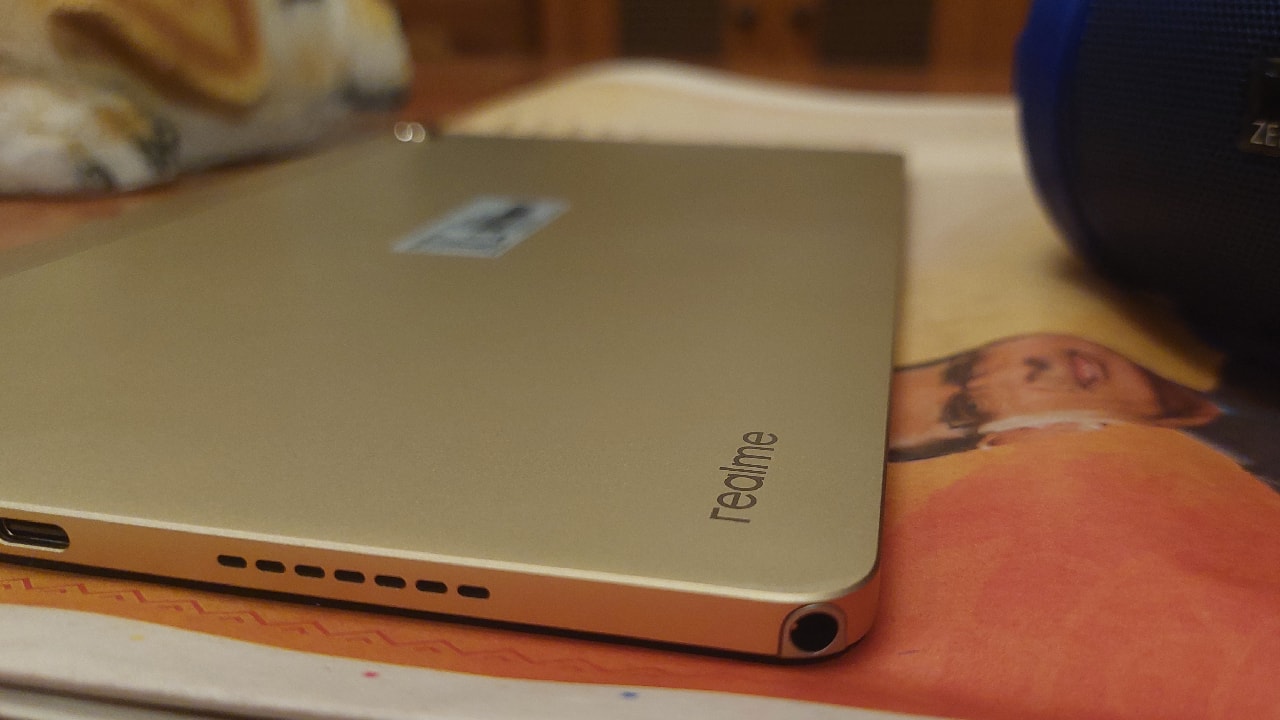 The review unit I received shipped with the MediaTek Helio G80 SoC which is built on a 12nm process and has two ARM Cortex A75 cores capable of speeds up to 2GHz and six ARM Cortex A55 cores with clock speeds up to 1.7GHz. The SoC is paired with 4GB of RAM and has a Mali-G52 GPU clocked at 950MHz.

Right off the bat, you will notice that things just don't feel as smooth as they could be. There is noticeable micro-stutters while swiping on the home screen or pulling up your app drawer for example. It isn't unworkable, in fact its quite stable. Once you get used to it, the tablet doesn't give you too many problems apart from the odd crash here and there.

Unfortunately, there is noticeable slow-down when switching between a large number of open apps. You will also notice slow scrolling speeds on websites in general and opening too many tabs on Chrome takes its toll on the paltry 4GB of RAM.

For general use however, it's still a solid performer. If you don't push it too hard, you will find that most common workflows like video streaming, light browsing and gaming are entirely workable.

Gaming on the tablet is serviceable. Most of the time the performance was a solid 30fps but I did notice instances where the framerate would dip. Tuning a few settings in BGMI eased the load on the GPU a bit and gave me better framerates but Forza Street and NFS No Limits continued to be spotty in terms of performance.

To be fair, at this price you cannot expect flagship level performance and for what it is, the Realme Pad gets by with what it has got.

The Realme UI for the tablet is mostly a clean implementation of Android 11 with a few bells and whistles sprinkled on top. Naturally, this helps a lot with performance and it was a good call to keep the OS, near stock. There is no bloatware or pre-installed apps apart from Google apps here either, which is another win in my book. The 10.4-inch WUXGA+ (2000 x 1200) display is meant for landscape use. In the time I spent with it, I had no major complaints. It gets really bright outdoors and indoors, the colours pop and there was no noticeable ghosting during playback. Again, if I nit-pick, I would say the display skews a little too much towards the white of the spectrum which makes the blacker areas a little washed out but it isn't a deal breaker.

An 8-megapixel Wide Angle camera sits on the front and an 8-megapixel camera joins it on the back as well. As you might expect, the camera's are pretty average but the front camera is still decent enough for voice calls and the dual-mic array with noise cancellation ensured that my voice was crisp and the person on the other end reported no problems.

The 7100mAh battery is a real show stopper. When I first got the tablet, it had fifty percent charge on it and I did not need to charge it until very late the second day. I got about two and a half hours of screen on time with fifty percent charge with enough idle standby time to last two full days with seven percent battery still left. The Realme Pad line is an interesting beginning for the company and priced at Rs 13,999 for the base 3GB RAM and 32GB storage WiFi only model, it's got the pricing right. At that price, it's easy enough to forgive the flaws that you might have read here.

For the next generation of tablets, I hope Realme considers a faster SoC and more RAM. I know it sounds like there are a lot of asterisks in my recommendation but at that price, you should be willing to overlook many of them.
Rohith Bhaskar
Tags: #Realme #Realme Pad
first published: Sep 17, 2021 07:54 pm