Upcoming Event:Experts and leaders discuss how modern digital tools are transforming the media industry. Register now
you are here: HomeNewsPolitics

Russia-Ukraine conflict | At least 198 Ukrainians, including three children, have been killed as a result of the Russian invasion of Ukraine, the head of the Ukrainian Health Ministry in Kyiv was quoted as saying by the Interfax news agency on February 26.

The visitors prayed for peace, paid tributes to those who have died in the conflict so far, condemned the Russian invasion and extended support to Ukraine (Image: Gulam Jeelani)

Tamara, a native of Ukraine, has been living in Delhi for many years. Watching from afar the visuals of a full-scale Russian invasion of her motherland for three days now, the middle-aged woman says she has been going through a roller coaster of emotions.

“Have you ever heard about Ukraine attacking Belarus, or any other neighbouring country? Or did you ever hear Ukraine declaring war on any country? No. We are a peace-loving nation and we have been under attack,” says Tamara on February 26 as she puts an ‘angel’ doll on the wall of the Ukrainian Embassy in Delhi’s Vasant Vihar as a mark of respect for the soldiers and civilians killed in the eastern European country.

At least 198 Ukrainians, including three children, have been killed as a result of the Russian invasion of Ukraine, the head of the Ukrainian Health Ministry was quoted as saying in Kyiv by the Interfax news agency on February 26.

“I feel angry, I am in despair and I am also hopeful at the same time. My country and my people are fighting a superpower bravely while the international community looks on,” says Tamara, who prefers to be identifies by her first name. 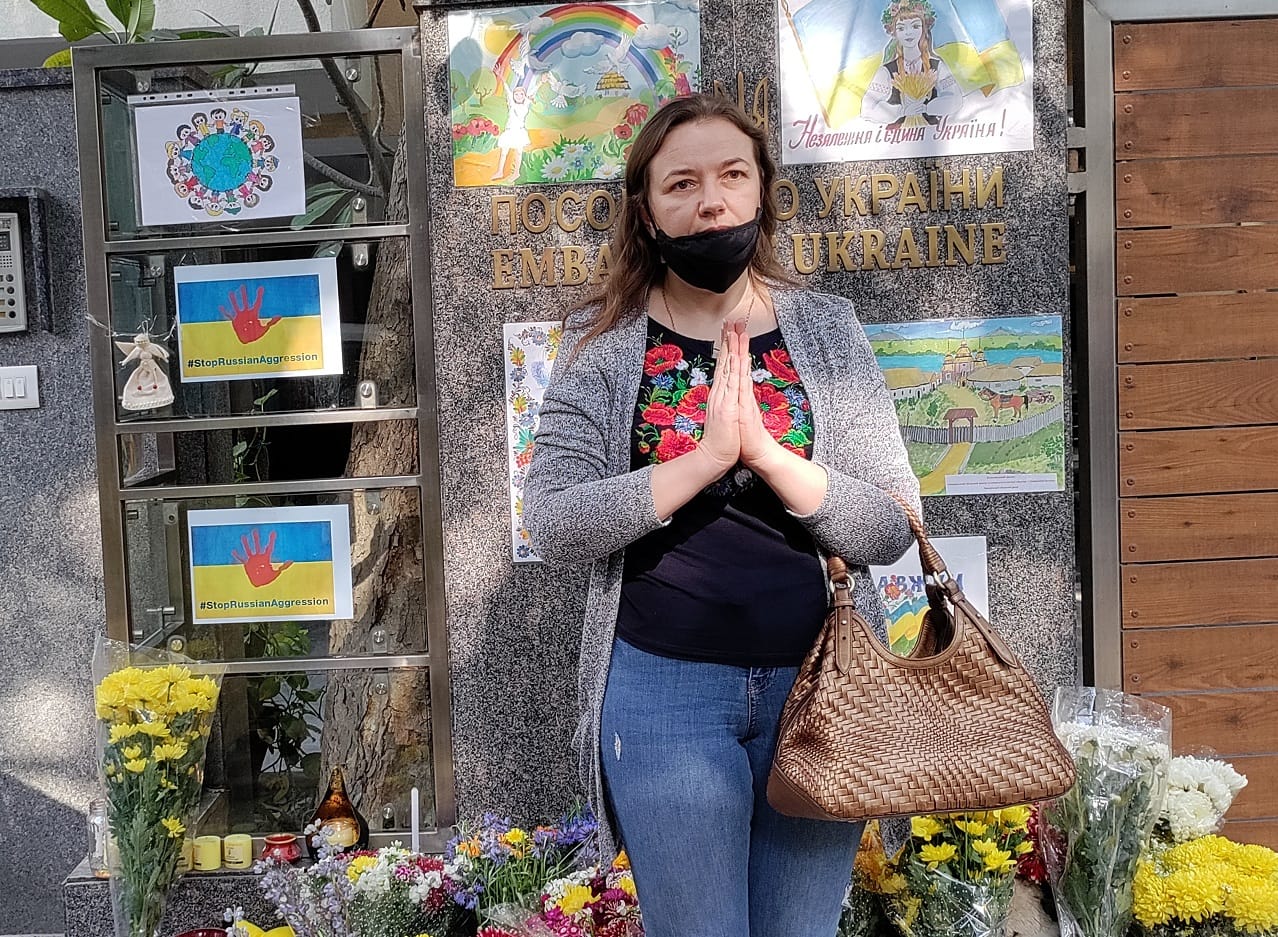 Tamara, a Ukrainian national, grieves over the loss of lives back in her homeland

Amid escalating tensions in the war-torn European nation, a number of people comprising Indians, Ukrainians and diplomats of European countries in India, visited the Embassy of Ukraine on February 26. The visitors prayed for peace, paid tributes to those who have died in the conflict so far, condemned the Russian invasion and extended support to Ukraine.

The wall is full of posters condemning the invasion, posters pleading for peace and candles for those killed so far in the conflict.

READ: Will not lay down weapons: Ukraine President defiant in new video amid Russian invasion

"We can only pray that the war ends. It breaks our hearts to see what has fallen upon our people back home. This is a time when the whole world should stand with us. We hope that it ends soon," said another Ukrainian national, who did not want to be named.

Julius Pranevičius, Ambassador of Lithuania, was among the first diplomats to visit the Embassy. “We stand by Ukraine and the Ukrainian government. We will continue to condemn Russian invasion,” Pranevičius said, after putting a bouquet of flowers on the wall of the embassy. He was received with a hug by Ukrainian ambassador Igor Polikha who had a busy day attending to diplomats and representatives from different European countries at his two-storey embassy. Among other foreign diplomats who have extended solidarity with Ukraine, Ugo Astuto, Ambassador of the European Union to India also visited the Ukrainian embassy. “We have said it before and we are repeating it again. We will try our best to make Russia accountable for this,” Astuto said after meeting Polikha.

Also, read | ‘Happy to be home, but a little worried about career,’ says Indian student who returned from Ukraine

India abstained on a US-sponsored UN Security Council resolution that "deplores in the strongest terms" Russia's "aggression" against Ukraine, with New Delhi saying dialogue is the only answer to settling differences and disputes and voicing "regret" that the path of diplomacy was given up.

Among the visitors were also people whose relatives are stuck in Ukraine. Parents of Indian students studying in Ukraine have dropped by the Embassy office for enquiries, according to the on-duty staff.

A group of people working for a healthcare company with an office in Ukraine also came and prayed for peace.

“Many of us had been to Ukraine. Most of the staff in the company’s Ukraine office are Indians. They have settled there now. We pray they are safe,” said Manish Agarwal, one of the company workers, who paid respect with a bouquet of flowers and lighting a candle.