UPCOMING EVENT:Are you 45+? Planning for retirement? We have just the right webinar for you - Planning for Retirement with Life Insurance on 27-Jan, 3pm. Register now!
you are here: HomeNewsOpinion

Given the price uptick for both crude and gas, it should have a positive rub-off on net realizations. ONGC can be bought at current levels, but look for a better entry point for Oil India

Crude prices rose almost 20 percent during the third quarter of FY18 from about USD 56 per barrel in October to about USD 67 in December on the back of the efforts by Saudi Arabia and Russia to cut production and curb inventories, geopolitical tensions, Forties and Libyan pipeline outages and lower US oil inventories.

The OPEC (Organization of Petroleum exporting countries) production cut has now been extended till December 2018 with an aim to keep crude prices stable.

With an uptick in the crude prices, the topline of upstream oil companies saw a healthy growth during the quarter ended December 2017.

Oil India reported a healthy growth with a 16 percent YoY (year-on-year) uptick in the topline along with almost a 67 percent YoY increase in EBITDA and a 55 percent increase in net profit. EBITDA margins inched up around 1290 basis points YoY and 200 basis points QoQ (quarter on quarter). A 35 percent contraction in other expenses supported profitability growth. 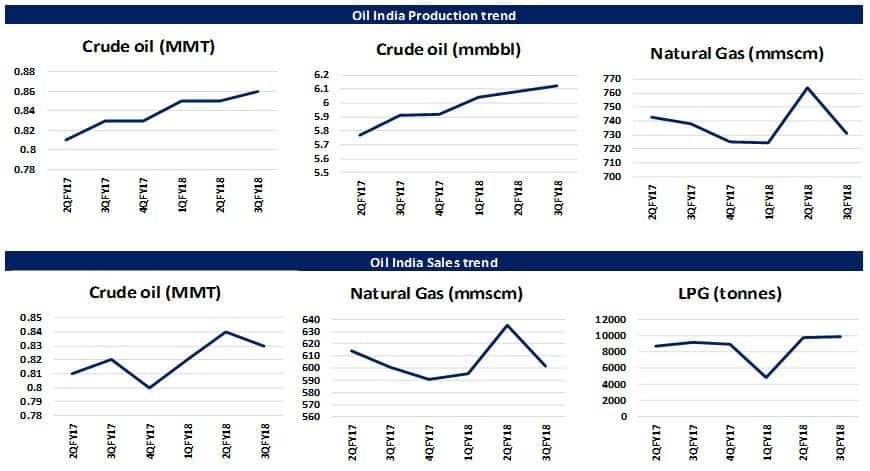 ONGC (Oil and Natural gas corporation) reported a steady performance with a 15 percent YoY topline growth along with a 21 percent YoY uptick in EBITDA. The 26 percent YoY surge in other income supported net profitability which grew 12 percent YoY. However, on a QoQ basis lower other income and higher depletion charges resulted in a 2 percent fall in Net profit. While the EBITDA margins were down 70 basis points over the last quarter, they inched up 250 basis points YoY. Traction in performance was a result of the global surge in the crude prices along with an uptick in the gas prices during the quarter. Higher exploratory costs and statutory levies ate away a portion of the EBITDA at led to a sequential decline. According to the company management, the gas volumes are expected to move up rapidly owing to upcoming addition in the capacity from Daman, Vasishta, Cauvery fields.

Post the correction of 4 percent in Oil India and around 3 percent in ONGC in the past one year, the stocks are trading at a 2019 PE of 8.3x and 8x, respectively, and an EV/EBITDA of 5.6x and 3.9x, respectively. Given the overall momentum in crude oil prices, along with a favourable exchange rate situation and the expectation of crude to stay stable in the forthcoming months (upcoming listing of Saudi Aramco to keep crude stable) we expect the realizations to remain stable for both the companies.

While oil volumes are expected to remain more or less flattish owing to the increased stress on cleaner fuels and uptrend of crude prices, we expect the gas volumes to see some upside. Given the price uptick for both crude and gas, it should have a positive rub-off on net realizations.

We see a steady topline for both Oil India and ONGC and recommend to keep both the companies on radar. At current levels, we see ONGC as a good pick to include in the portfolio. However, we would be looking for a better entry point for Oil India.