Cryptocurrencies a bad omen for gold

Some argue that gold has an ‘intrinsic’ value whereas cryptocurrencies have none. The intrinsic value of gold developed over many centuries of wider acceptance by the State and religion. This intrinsic value has been in decline for the past few decades

Historically, copper, gold, and silver coins were legal tender in the Indian subcontinent, and other regions across the world. Traditionally, in India, these metals have enjoyed acceptance as ‘sacred metals’ due to their religious, medicinal, and economic importance.

With the rise in its industrial use, copper may have lost its ‘precious’ status, but gold and silver still continue to enjoy the attention. Nowadays, even the acceptance of gold and silver as ‘sacred metals’ is gradually diminishing.

In past few years, the Government of India has made significant efforts to encourage people to own gold in a non-physical form, through sovereign gold bonds (SGBs). In recent years, digital gold has also gained in popularity due to its ease of transaction, and holding.

Cryptocurrencies (such as Bitcoin) are a relatively new phenomenon in the global financial ecosystem. These are not yet currencies in the traditional sense — except in El Salvador, which has declared Bitcoin as legal tender. Some jurisdiction (such as China, Indonesia, etc.) have banned the use of all cryptocurrencies as a medium of exchange.

To achieve a ‘currency’ status, cryptocurrencies would need to gain much wider and deeper acceptance; which usually comes with time and awareness. Gold took centuries to gain wide acceptance as a medium of exchange, and become a valuable asset. A few cryptocurrencies may gain this status in future, simply because modern technology has made things much faster.

In India, cryptocurrencies have gained tremendous popularity over the past five years. It is estimated that there are over 100 million people in India owning one or more cryptocurrencies; the largest number for any country in the world. This number is materially higher than the number of people owning publically-listed shares in India. The value of cryptocurrencies owned by Indian citizens is estimated to be close to $900bn.

The government has proposed to introduce ‘The Cryptocurrency and Regulation of Official Digital Currency Bill 2021’ in the winter session of Parliament to regulate cryptocurrencies. It aims to “create a facilitative framework for creation of the official digital currency to be issued by the Reserve Bank of India”, and prohibit private cryptocurrencies, with certain exceptions to promote the underlying technology and its uses.

Earlier, a high-level inter-ministerial committee suggested a ban on private cryptocurrencies, except any virtual currencies issued by the State. However, the government refrained from pushing the legislation in the budget session. It was felt that a balanced approach is required in the matter, for which wider consultation with all stakeholders is important.

It appears that the government is against the use of cryptocurrencies as a medium of exchange (legal tender), but supports the development and use of blockchain technology. It is, therefore, likely that a regulatory framework may be provided for ownership, transfer, sale and taxation of cryptocurrencies. If so, cryptocurrencies may be treated as ‘capital assets’ under the taxation laws.

Therefore, a fiat digital currency should not be confused with a decentralised and distributed cryptocurrency.

An Idea Whose Time Has Come

In every democracy, especially in socialist ones, governments tend to regulate every innovation, because most new innovations make a few people rich, leaving the rest behind, and this increases the fear of rising inequality. The tendency to overregulate innovations is usually driven by the concerns to assure the majority of population that stays at the bottom of the pyramid.

An example of this was the attempt of British government to ban use of cars on public roads in early years of automobiles. The argument was that this may have negative implications for the employment of poor people running horse carts on London’s streets.

The good thing is that there is no historical evidence of a government regulation killing an innovative idea which was ready for adoption by the wider sections of the public. Expansion of organised retail in India is an example.

A Bad Omen For Gold

A well-regulated cryptocurrency market could be a bad omen for ‘valuable assets’ such as gold and silver. Factors like popularity and spread of technology; the rise of fascist and communist tendencies due to worsening socio-economic disparities; the rise in electronic transactions lowering the risks arising from physical transactions; the emergence of new articles of luxury; stronger and deeper social security programmes; etc. are all leading to the sustainable decline in traditional demand and pre-eminence of gold. This decline is set to continue.

The table below clearly shows that gold and cryptocurrency are comparable assets in most respects. Some argue that gold has an ‘intrinsic’ value, whereas cryptocurrencies have none. The intrinsic value of gold developed over many centuries of wider acceptance by the State and religion. This intrinsic value has been on the decline for the past few decades.

Insofar as the volatility is concerned, in the past two centuries, gold has seen many bouts of wild volatility, similar to what cryptocurrencies are witnessing these days. 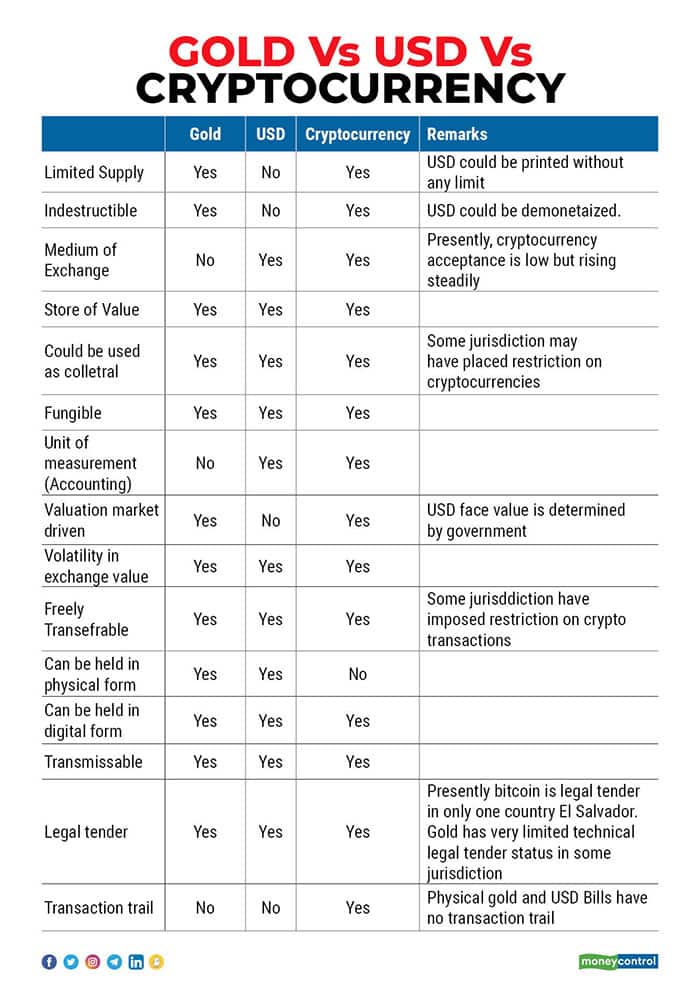