More Indians today think their country is better than others than in 2013: CVoter-Stimson Survey

About 90 percent of respondents to the survey think India is better than most other nations, up from 82 percent in a similar survey in 2013. As much as 71 percent of the respondents strongly or somewhat supported PM Narendra Modi.

More Indians today think that their country is better than most other nations than the percentage of people who expressed similar sentiments in 2013, claimed a survey, which also found strong support for Prime Minister Narendra Modi.

About 90 percent of respondents to the survey conducted by pollster CVoter for a US-based think tank The Stimson Center agreed strongly or somewhat with the statement that “India is a better country than most other countries.” This is higher than a 2013 survey conducted by a different agency, which found 82 percent of respondents strongly or somewhat agreeing with this statement.

The CVoter survey was conducted among 7,000 people respondents from over 28 states and six Union territories between April 13 and May 14 this year.

When asked about their politics and partisan leanings, the survey saw as much as 71 percent of the respondents strongly or somewhat supporting PM Narendra Modi. The support for BJP was also high at 61 percent. Hindu voters, especially those from the upper castes, were more likely than any other group to support Modi.

The high nationalistic sentiment is accompanied by a negative opinion of India’s neighbours. While 67 percent of the respondents disliked Pakistan to a great extent, the figure stood at 65 percent for China.

Although respondents from South India had slightly more positive views of China, this difference was less evident in the case of Pakistan, said the report.

Nationalistic sentiments also extended to confidence in India’s military prowess. As much as 90 percent of the respondents believe that India would probably or definitely beat Pakistan in a war. Meanwhile, 72 percent think the same about a war with China. 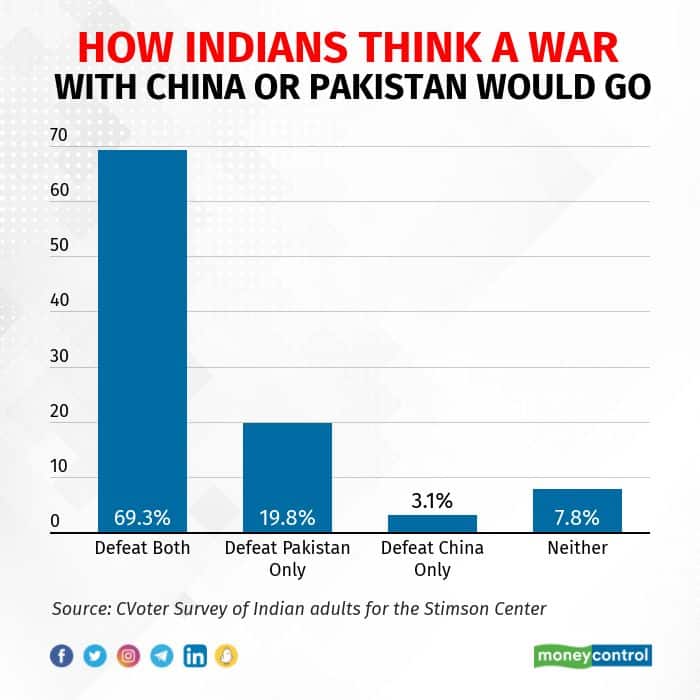 According to the report, this might "make it challenging for Indian leaders to back down in crises, since their public may view such conflicts as winnable even if the military balance is not in their favour". The survey results also show that supporters of Modi are more likely to believe that India can defeat China or Pakistan in war than non-supporters.

As much as 91 percent of Modi supporters think India can defeat Pakistan, compared to 85 percent of non-supporters. Whereas, for a conflict with China, the figures stand at 75 percent and 66 percent respectively. Comparison with the US

Only 70 percent of Americans agreed strongly or somewhat in 2014 that the US is a better country than others. “While American exceptionalism is a well-understood domain of study, self-perceptions of Indian exceptionalism are relatively underexplored,” the survey report said.

When asked whether they think that the US will come to aid India in the event of an international conflict, about 59 percent of respondents to the CVoter survey said that it would ‘definitely’ or ‘probably’ for Pakistan, while 56 percent felt the same about a conflict with China.

Moreover, a large chunk of the respondents (roughly 4 in 10) remains sceptical of aid from the US in such scenarios.

Finally, as much as 68 percent of the respondents believe that India should possess more nuclear weapons than its adversaries. “If these preferences hold, they could serve as a political driver for an arms race with China, which US assessments forecast could quadruple its nuclear forces to 1,000 weapons by 2030,” said the report.
Sreedev Krishnakumar
Tags: #China #CVoter #Narendra Modi #Nationalism #Pakistan #The Stimson Center
first published: Aug 29, 2022 04:42 pm