How to increase your cycling mileage, and common long-distance cycling problems to watch out for. Tip: Invest in a good pair of biking shorts to minimize saddle soreness.

In the second month of training, you can ride on rolling terrains or take on flyovers if you are cycling in one of the big cities.

The first month was mainly about familiarizing yourself with your cycle, getting used to cycling and getting comfortable with the idea of cycling distances for which you would normally use a motorized vehicle as also with sharing the roads with traffic. In Month 2, we are going to increase the mileage, says cycling coach M.S. Sriram, founder of Sprocket Science India.

“As we increase the weekly cycling distance ever so slightly from hereon, ensure that you are not carrying unnecessary weight. Carry just one sipper bottle and ensure you finish the bottle by the end of your ride. If you don’t, you are either carrying more than you need or you are not drinking enough. Do not carry anything that is not essential for the ride,” advises Sriram.

Since you are increasing mileage, you will also spend a lot more time on the saddle, which means you are likely to experience saddle soreness this month. Saddle soreness is slight pain in the butt at the bottom of your tailbone. Many beginners buy gel seat covers thinking it will help avoid saddle soreness and also make riding more comfortable. Nothing could be farther from the truth. The gel seat cover, in fact, slips around a lot, which could lead to poor riding form and chafing in uncomfortable places.

“You are better off buying proper cycling shorts,” says Pranjal Neog, 50, head of human resources at Goodricke in Kolkata. “They are padded in the right places, which protects the butt and they do not cause chafing even while riding long distances,” adds Neog, who regularly cycles 40-50km twice or thrice a week.

No matter what you do, you are not going to beat saddle soreness, says Deepti Bharadwaj, 41, who works for Infosys in Bengaluru and is training for her maiden 60km ride. “If you spend a long time cycling, your butt will hurt - there’s no escaping it. However, with time your body gets used to it and you don’t suffer from saddle soreness after a point,” she says.

Coach Sriram confirms there’s no way around saddle soreness. It is one of the things you must accept along the way to becoming a cyclist.

The good news is that despite increasing mileage, things are likely to remain easy over the next four weeks. “Anyone who is used to some kind of physical activity would have no trouble covering about 30km on the cycle,” says Neog from experience.

Bharadwaj adds that cycling, compared with running, is much easier on the body and hence you can push yourself a lot more in this sport. “Following coach Sriram’s plan, hitting the 30km distance was very smooth and comfortable. Also, over the two years that I have been cycling, I have found that there are fewer injuries on the bike. That gives me the confidence to push myself more,” adds Bharadwaj.

Another thing to look out for as you increase the distances is some chafing around your underarms, inner thighs and the butt, but this can easily be avoided by applying appropriate cycling creams, says Bharadwaj. “I found that out from the cycling groups and forums I am part of and hence have never had any chafing,” she adds.

As you increase distances, you might face punctures. Given the condition of our roads, punctures are a reality that every cyclist has to face up to. Bharadwaj remembers a puncture she had one about 20km from her flat very early in the morning. “It was the kindness of a good Samaritan that made sure I made it back home with my cycle in time to log in for work. I was told to learn how to fix punctures but I didn’t. It’s best to learn to do that and carry a spare tube and puncture repair kit at all times,” she advises. 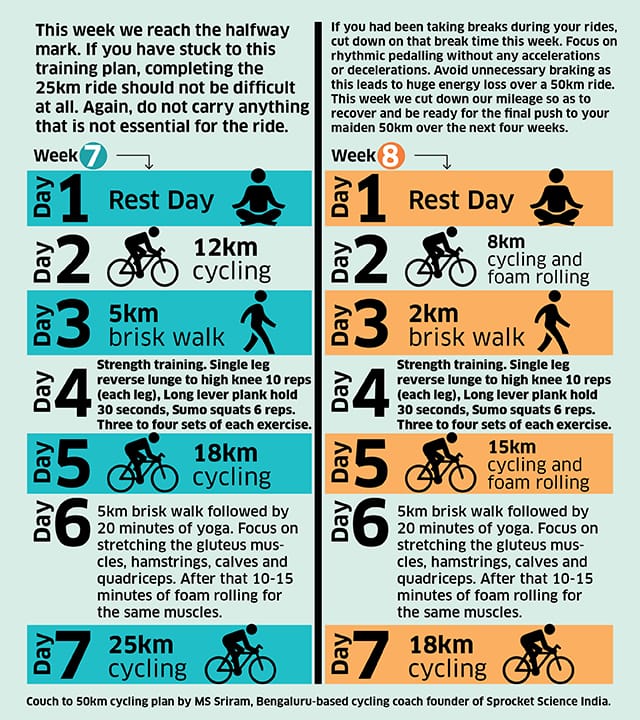