Traditional warmers hamam, bukhari and kangri are a staple in every home

A Kashmiri boy feeds a hamam with firewood, through its iron grate. (Photo credit: Firdous Hassan)

Every year, between December end and February beginning, the valley endures a harsh winter called the Chilla-i-Kalan. Temperatures can fall to sub zero. Water supply lines can freeze up. Lakes, including the Dal Lake, turn into sheets of ice.

Twenty-five kilometres from the summer capital Srinagar, 55-years old Fatima Bano from Pattan in north Kashmir was panicking. She had to store everything from food to fuel.

Read: Chillai Kalan, the 40 harshest days of winter in Kashmir.

Women start preparing for the season in autumn. In a practice locally known as ‘hokh syun’, they start sun-drying vegetables including tomato, turnip, bottle gourd, brinjal and leafy vegetables. They stock up on smoked fish called ‘farrigad’, and dried fish called ‘hokhegad’.

To keep warm, the valley’s residents still depend on traditional tools–kangri, hamam and bhukari.

“Before the sixties, winters would cut off Kashmir from the rest of the world. Therefore, traditional innovations became necessary to survive till March,” said historian Zareef Ahmad Zareef.

Mansoor Ahmad Mir, 34, of Baramulla took two years to build a concrete house. But, it didn’t have a hamam.

A Turkish innovation brought by Mughals, hamam is an entire room lined with lime mortar and with a two-tiered floor, with the upper tier made of handmade limestone blocks.

Firewood is then spread between the upper and lower tiers, through an iron door. The smoke generated is piped through a chimney and a copper tank is placed above the fire pit, for plentiful supply of warm water.

Initially these rooms were found only in the mosques but now it is built into every home. 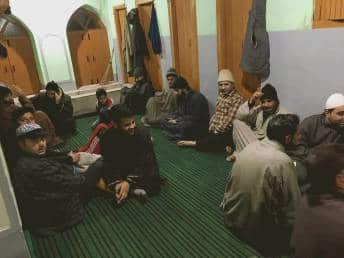 People seated inside a hamam built into a mosque. (Photo credit: Firdous Hassan)

Historian Zareef said, “In Kashmir, hakims used to prescribe a stay in hamams to people with orthopaedic ailments. It usually had two pools, one filled with herbs and hot water, and the other lukewarm,” he said. Gradually, he said, it became a mark of pride for rich families, to have hammams built into their homes.

In Mansoor’s village, every house has a hamam, whatever their financial status. When the weather started to change, he decided to correct the anomaly in his house post haste.

Bashir Ahmad Mir (40), a mason from Bandipora who has 20 years long expertise in building these rooms said that the demand for them has not declined despite advancements such as central heating and other heating appliances.

This season, he has built more than 20 hamams, priced between Rs 70,000 and Rs 1,50,000. Three kinds of stones determine the quality of each structure: Devir lasts more than 50 years but costs Rs 7000 per 9 sq ft; Mandak Pal Pampore is of a lower grade but costs nearly the same; and Saderkote Balla is the cheapest at Rs 4,000 per 9 sq ft, but they crack within a decade.

These age-old radiators are even found in government offices, said Zareef.

Bukhari is essentially a tin box with a long exhaust tube. It is most commonly coal fed.

Over the years, gas bukharis have come into the market but traders said that the traditional coal-fed ones are still selling like hot cakes (pun unintended).

Forty year -old Bashir Ahmad Lone from Khambiyar Baramulla, a bukhari manufacturer, said they make over a hundred of these of various types and in different sizes during the season. .

“We still have customers, including educational institutes and government offices, asking for the older model over the electric of LPG-powered ones,” he said. 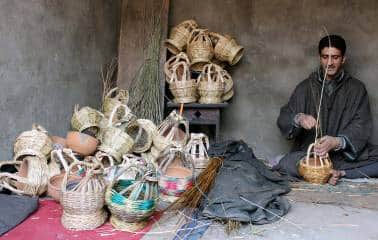 Mud pots holding coal embers are placed into these wicker baskets, and used as personal warmers.

Kangri is a personal warmer, held under the long, traditional clock called pheran.

The kangri is an earthen pot, placed inside a wicker. Into this, coal embers are placed. Zareef said that the device has evolved from the primitive manan and kang, both of which were made of mud too, and the latter has a handle.

Sixty-year-old Ali Mohammad Bhat, a kangri maker from Bandipora works, said that he makes a thousand of them every season and the lot is sold before December. Each piece goes for Rs 250 to Rs 400. 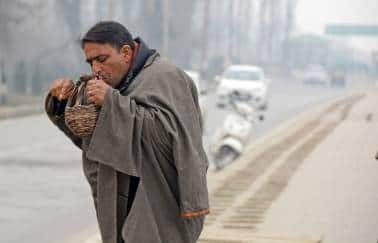 Kangris come in various weaves, and at different prices. The more elaborate ones are given as part of dowry. (Photo credit: Firdous Hassan)

There is a variety of kangri. For example, Islamabad kangri, which is the most common, has a broad base and a wide-mouthed pot. It costs anywhere between Rs 150 to Rs 200, and is generally bought by people who do outdoor work.

Bandipora kangri, which costs about Rs 200 a piece, has a finer weave and is mostly supplied to north Kashmir.

Chrar kangri is the most expensive for the quality of its wicker, priced between Rs 300 and Rs 500. This, embellished with silver chains, is traditionally given as dowry.

Pheran, or the long coat, was there long before the valley came under the Central Asian influence, said Zareef. Earlier called loach, it used to be two pieces of cloth held together with a unique stitching. It was worn round the year in different fabrics. With time, its name was mixed up with pairahan, the Persian word for garment.

There are modern adaptations of these now, like the ones Sadia Mufti, a designer from Srinagar, sells for Rs 3,500 and upwards. She said that she had customers from other districts such as Anantnag and Baramulla as well.
Firdous Hassan
Tags: #Bukhari #Chillai-Kalan #Hamam #infrastructure #Jammu and Kashmir #Kangri #Kashmir winter #sub-zero temperatures #traditional tools
first published: Dec 31, 2021 09:56 am