The National Health Authority (NHA) is working on guidelines to ‘name and shame' fraudsters who have wrongly benefitted from the health insurance scheme.

Got a fraudulent claim passed under the Pradhan Mantri Jan Arogya Yojana (PMJAY)? Then be ready for your name and photograph to be publicly displayed at all prominent locations in India.

The National Health Authority (NHA) is working on guidelines to 'name and shame' fraudsters who have wrongly benefitted from the health insurance scheme.

According to the Ayushman Bharat-PMJAY Annual Report, nearly 3,000 suspicious cases amounting to Rs 4.5 crore have been sent to states for investigation. Further, almost Rs 2.29 crore worth fraudulent claims have been recovered by NHA from the hospitals after audits. 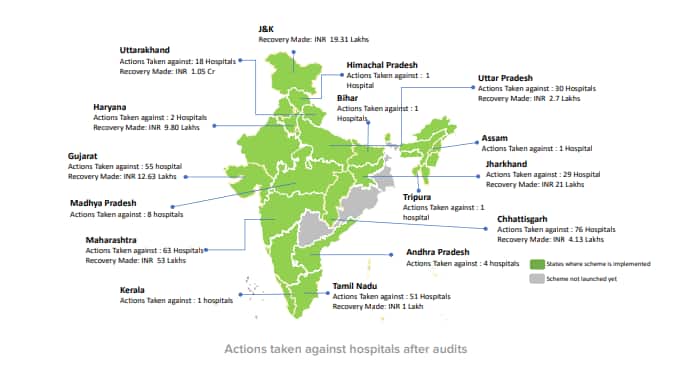 Sources said that while the endeavour is to ensure that the beneficiaries of the scheme get their claims settled in a quick and efficient manner, fraudsters would also not be spared.  This includes individuals, hospital staff as well as insurers.

NHA is the monitoring authority for the PMJAY scheme which is the world’s largest fully funded health insurance scheme. Launched in September 2018, this initiative aims to provide medical insurance to nearly 107.4 million poor families of the country identified as per the Socio-Economic Caste Census Survey-2011.

The objectives of the scheme include reducing catastrophic out-of-pocket health expenditure, improved access to the population for hospitalisation care. PMJAY provides a cashless cover of up to Rs 5 lakh on a family floater basis which means that it can be used by one or all members of the family.

As of November 11, there have been 18,694 empanelled hospitals. A total of 6.16 million beneficiaries have been availing hospital treatment out of the 65.39 million e-card holders under the scheme.

As a first step, 338 hospitals were issued showcause notices or were suspended/de-empanelled till August 2019 by various state governments. This was after inspection for fraud.

NHA said that they had decided to conduct proof of concept with partners who are experts in detecting fraud/abuse globally.

Over 23 companies showed interest in participating in the process and the NHA selected five companies to execute the proof of concept. Now NHA is in the process of procuring a fraud control partner based on the learning.

This fraud control partner will help NHA in studying the patterns of fraud, who is the perpetrator and then device mechanisms to curb it.

"Fraud was only getting detected after it took place. Also since the end beneficiaries are usually not aware of what they are entitled to, hospitals have been taking advantage. The idea is to prevent fraud and not merely detect it later," said an official.

NHA is also setting up National Anti-Fraud Unit (NAFU) and State Anti-Fraud Units (SAFU) for overall monitoring and control. Over and above this, the general public will also be encouraged to report any cases of fraud under a whistleblower policy that will soon be put in place.

Considering that PMJAY is funded by the government, the authorities want to ensure that the subsidy is used for the right purposes.

In the Budget 2019-20, a total of Rs 6,400 crore has been allocated for the PMJAY scheme. Any fraudulent claim collected by a hospital is detrimental because then the genuine beneficiaries may not have adequate covers and the government may be required to provide additional funds.