NBFCs seeking to convert into a universal bank require a 10-year track record, among other requirements.

The Reserve Bank of India (RBI) on November 26 accepted 21 out of 33 recommendations of an internal working group on the ownership guidelines and corporate structure of private sector banks.

For non-banking financial companies (NBFCs) looking to convert into a universal bank, minimum requirement on the track record of the experience of promoting entity, including for a converting NBFC, may continue at ten years for universal banks, the RBI said.

On the eligibility of promoters, the RBI said it may, as part of the framework for scale-based regulation of NBFCs, consider putting in place a tighter, bank-like regulatory framework for large NBFCs.

The initial recommendations by the internal working group were - allowing well-run large NBFCs with an asset size of Rs 50,000 crore and above, including those owned by corporate houses, may be permitted to convert to banks provided they complete 10 years of operations and meet the due diligence criteria.

The central bank has accepted the recommendation for raising the bar of initial capital requirement for the universal bank. As a result, the initial paid-up voting equity share capital/net worth required to set up a new universal bank may be increased to Rs 1,000 crore (from present Rs 500 crore), RBI said.

The recommendation around the asset size requirement is still under examination by the central bank.

Further, the central bank does not allow corporates to promote banks, but large and well-run NBFCs could also face strict regulation under the scale-based regulation.

A senior official at a large NBFC said that top NBFCs seeking banking license would have to decide on the benefits and costs of the transition thoroughly; banking is not just about lending, but the operating costs and structure are not low and nowhere near as compared to NBFCs.

Further, regulatory requirements will also go up with maintaining statutory liquidity ratio and cash reserve ratio, the official added. In addition, NBFCs considering transition will also have to understand the impact on existing stakeholders – from shareholders to customers.

Access to public deposits is an attractive factor for NBFCs to apply for a banking license, but regulatory oversight and scrutiny increases, which is good from the RBI’s viewpoint.

An analyst, requesting anonymity, said while it’s difficult to say which NBFCs could be eligible and may seek license, even if some of the top ones don't seek a license they would be supervised and regulated similar to banks.

However, below are the top NBFCs that could possibly explore tapping a universal bank license based on their asset size, ten-year track record and among other due diligence parameters. 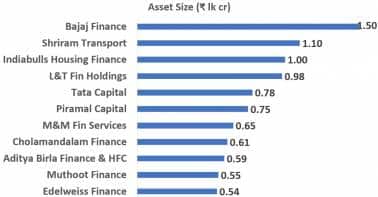