The 2020 farm legislations raise hopes for the farming community by opening up new and wider avenues for farmers as well as agriculture startups. According to experts, the new laws offer great scope for budding agri-startups and will encourage tech-interventions that could prove to be a “game-changer”.

Agriculture startups in India account for less than 4% of the 33,688 recognised startups, based on the data analysed from the Startup India website, as on September 30, 2020. Information Technology services account for the most (13%) of the recognised startups, followed by ‘Healthcare & Lifesciences’ (8.5%) and Education (7%). However, agriculture is one of the top segments thriving among startups, ahead of sectors such as finance technology, artificial intelligence, retail, automotive, textile and apparels, fashion and others.

“The new farm bills are going to be great for the farmer,” Milan Sharma, chief executive officer, Intello Labs, an agri-tech startup, said. “With an open market, there will be fair and transparent trade, farmer income should certainly increase. As a digital company focused on bringing transparency in the food industry, we are quite excited about it,” he added.

With the new legislation in place, there is a good opportunity to build demand driven--farm-to-fork--supply chains with little intermediation, more value-addition and quality control, said Hemendra Mathur, Chairman, Federation of Indian Chambers of Commerce & Industry (FICCI) Taskforce on Agri-Startups & Venture Partner, Bharat Innovation Fund. Reforms should be in the context of potential for developing and catalysing entrepreneurial models in the agriculture sector, he added.

“These reforms were long due and now doing away with APMCs, private players will have opportunities to enter the ecosystem in a big way,” said Sateesh Nukala, chief executive officer and co-founder of BigHaat, a one-stop online market platform for farmers that provides both solutions and inputs.

Agriculture Startups – A beacon of hope for the dwindling industry

Agriculture is still one of the largest sources of livelihood for Indians, with nearly 70% of rural households primarily dependent on it, and 82% of farmers in the country are small and marginal, according to India’s Economic Survey 2019-20. The contribution of agriculture and its allied sectors to national income has “gradually declined” from 18% in 2014-15 to 16.5% in 2019-20, the survey pointed out. India’s agriculture growth rate has been fluctuating over the years, as can be seen from the graph. This is likely to dip in the current financial year as a result of the global coronavirus pandemic and lockdowns having paralysed supply chains across sectors, making it difficult for farmers to access markets and sell their produce. Further, revival will be slow, given the increasing number of cases and limited logistical operability. As the government aims to double farmers' income by 2022, agri-startups, especially tech-based, will have an important role to play in driving sectoral growth.

“Doubling farmer income will not happen by doubling production and productivity, but by creating demand and farmers getting higher shares from consumer price,” Mathur said. Creating financing opportunities in the post-harvest phase is crucial for this to happen, he added.

“We believe Indian start-ups can play a significant role in the growth of the agriculture sector, and we are disrupting the old order, bringing new methods and ideas,” said Intello Labs’ Sharma. “Some of us have already scaled big (Ninjacart, Udaan), and others will also grow.”

India now boasts the world's third largest startup ecosystem, with the number of startups increasing 17% each year between 2012 and 2019.

More than 33,000 or 34% of the 98,000 startups registered on the Startup India website have been recognised by the Department For Promotion Of Industry and Internal Trade (DPIIT), as on September 30, 2020. As mentioned above, of the recognised startups, agriculture (1,294) comprised 3.8% of the total. The Economic Survey 2019-20, released earlier this year, too highlighted that agriculture accounted for 3.8% of the recognised startups, with IT services leading at the front.

Recognised startups are eligible for various benefits such as access to intellectual property rights services, relaxation in public procurements, self-certification under labour and environment laws and tax exemption for three years. 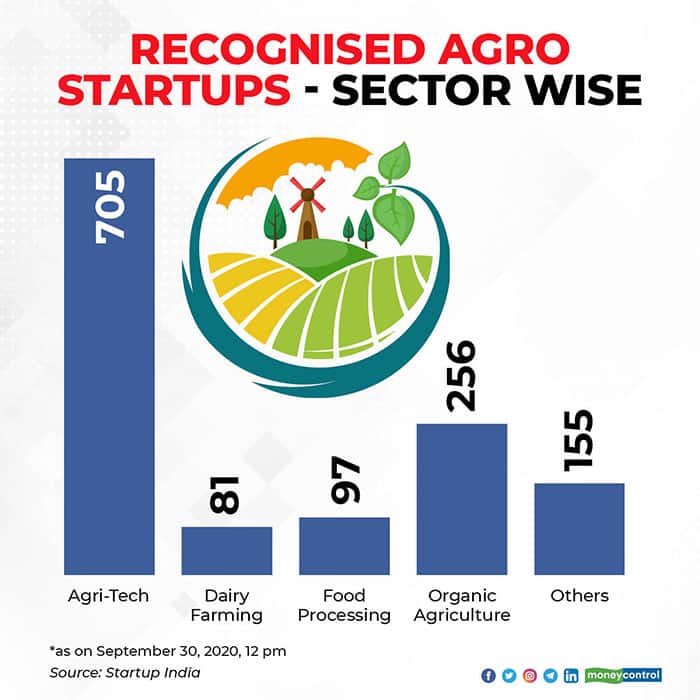 There are nearly 450 active agri-tech startups in India, and these are growing at 25% year-on-year, a report by Federation of Indian Chambers of Commerce and Industry (FICCI) dated April 30, 2020, said.

There is huge scope and opportunity for agri-tech startups to get into grading, sorting and packaging of farm produce, according to experts. These can increase the value of the product, benefiting the farmer as well as providing quality products to the consumer.

Startups like Intello Labs and Agricx are involved in quality assessment and grading of farm produce based on artificial intelligence (AI) technology. Likewise, Cropin is another agri-tech startup providing solutions based on AI and machine learning technology by mapping and digitizing farms and gathering data.

Also, simple value-additions by startups like providing storage, warehousing and micro-processing facilities, especially to small farmers, will prove to be beneficial. A few startups are already providing such farm-level facilities, typically managed mostly by village-level entrepreneurs, according to Mathur. “These models can increase farmer income, improve price prediction and create jobs for rural youth. Bringing these tech-interventions in supply chains by startups in the agri-sector can make a big difference and will prove to be a game changer,” he said.

Agri-tech start-ups received US$ 545 million in venture capital funding since 2014, of which 60% or US$ 330 million came in 2019 alone, the FICCI report highlighted. This indicates the significant scope and interest shown by investors in the agri-startup sector.

“With technology and digitisation coming to the front, we have seen close to 3X growth, and agri-tech startups like us having pan-India presence have been able to help farmers in a significant way, especially during the pandemic and lockdown,” Nukala said. “The rapid growth in the digital rural economy is a perfect recipe for growth of the AgTech ecosystem, transforming the farming sector into a sustainable and profitable one,” he added.

“Agri ecosystem is fairly well-connected and collaborative. In terms of investor interest, when we started in 2016, it was low, but in the last few years the interest has really gone up. We are bullish about the Indian agritech future,” Sharma said.