Got a raw deal on Amazon India and Flipkart this festive season? Here is why

You might have actually paid a premium for some of the products bought during the sales launched by Flipkart and Amazon India in 2020, according to a new study.

Roughly 16 percent of the products on Amazon and 6 percent on Walmart-owned Flipkart were more expensive during the sale period than a regular day, said the study by digital commerce analytics platform Dataweave, which was shared with Moneycontrol.

That’s not all. Up to 56 percent of the products on Amazon India and 47 percent on Flipkart carried the same price during the sale as any other day.

For the study, Dataweave, a Bengaluru-based 10-year-old firm that counts Japanese ad-tech firm FreakOut Group and home grown venture capital firm Blume Ventures as some of its investors , analysed the top 500 ranked products across key subcategories under segments such as fashion, electronics, grocery, baby products and personal care. These are the most popular products on the two websites.

While it is no secret that the discounts offered on the e-commerce companies such as Amazon and Flipkart have been tapering off in recent years, this year was a clear washout following the pandemic. While customers have been selective about their purchases with little or no appetite for discretionary buying, sellers have been trying to recover their losses faced due to the pandemic during the first half of the year.

Owing to COVID-19, even the costs of operations rose for sellers who had to spend a premium in ensuring safety and hygiene of products as well as employees. Sreedhar Prasad, an independent e-commerce analyst, said discounting seems to have reduced to being a marketing tool to attract people. “Earlier customers would go out of their way to purchase products just because there was a FOMO (fear of missing out) from discounting. Then the volume game worked for the sellers. In 2020, the volume game is not working since the customers are very selective about their purchases, and the number of shoppers would also be lesser.” On an average, Amazon offered 13.2 percent discounts across categories. The minimum discount of 7.2 percent was reserved for electronics goods, also traditionally one of the highest-grossing categories online. This was followed up by 7.9 percent in personal care and 8.4 percent in baby products. Amazon devices such as Echo voice service and Fire Tablets, among other products had the maximum discount of 33.8 percent compared with others.

Sellers on Flipkart offered an average discount of 15.2 percent across the above mentioned six categories. Men's fashion had the steepest discount of 24.7 percent.

Prasad the analyst said with financial insecurities amid the pandemic, people are using the lens of "real value for money" . “That ambiguity has led to many sellers too taking this stance, unless it's a liquidation situation." 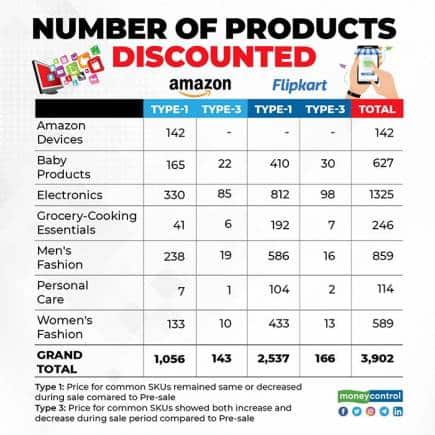 "Sellers decide the price of their products on Amazon.in and have brought thousands of deals and selection for customers during this festive period. In addition, our partnership with banks, sellers and ecosystem partners allow customers to access other affordability offers such as exchange, no-cost EMI, instant bank discounts and more," said an Amazon spokesperson without commenting on the pattern of pricing this year.

Over the years, companies have also become wary of discounting because it dilutes their brand. With Covid adding to costs, many seem to have stayed away from discounting.

"The branded players have recognised that over discounting is not something which enhances their image. Clients of ours who earlier would push for a massive push during the festival discount season in terms of wanting to get their brand profile visible were doing less of that this year partially because they want to keep their powder dry for the rest of the year," said Dilip Cherian, a communications consultant.

While this seems to be a chicken-and-egg situation, such a stance can also have an impact on the brand value of the flagship sales run by Amazon and Flipkart. Across the country, customers wait for the Big Billion Days and Great Indian Festival to begin in the anticipation of getting good deals and value of money. The question is, if the discounts have withered out will these sales hold the same brand value it did till a few years ago?

According to analysts, etailers will certainly have to come up with newer ways to attract customers as the pandemic is going to change the way customers make their purchases with the kind of excitement around these sales diminishing.

Flipkart and Amazon did not respond to queries for this story.

Looking to raise the first round of funding for your startup? Moneycontrol, in partnership with Inflection Point Ventures brings you Pitch Right. Apply here to get funded by marquee investors: https://forms.gle/y4a7ohs4A56LKAkB7 . Hurry! Deadline for entries is November 8, 2020.