Your investments are locked in for five years or till your retirement age, whichever is earlier

We are all aware of the Public Provident Fund (PPF), Employees’ Provident Fund (EPF), National Pension Scheme (NPS) and LIC’s pension plans to help us save for our retirement. Mutual funds, too, had offered schemes, in the industry’s early days, targeting retirement savings. Launched in December 1994, UTI Retirement Benefit Pension Fund (UTI RBPF) was one such scheme. Recently, it turned 26. But with over 500 equity schemes and around 350 debt funds available at present, does UTI RBPF still make for a compelling choice as your retirement vehicle?

What is it all about?

UTI RBPF is an open-ended fund. Your investments are locked in for five years or till your retirement age, whichever is earlier. It invests in a mix of equity (up to 40 percent of its corpus) and debt instruments. Your investments are eligible for income-tax deduction under Section 80C, up to a maximum amount of Rs 1.5 lakh, though you could invest more.

This is different from a typical equity-linked mutual fund scheme (ELSS) that also offers Section 80C tax deduction. ELSS schemes come with a three-year lock-in. Once the unitholder completes the lock-in of five years or turns 58, she can either withdraw her money or opt for a systematic withdrawal plan to ensure regular payments during retirement, though returns are not fixed, as they are market-linked. ELSS schemes, too, grew in popularity over the years and the shorter lock-in of three years also helped. “There were not too many other (retirement) funds into existence. Soon after the ELSS category got evolved and became the core category, they (the regulators) started giving blanket approvals to ELSS with 80C benefit,” says Suraj Kaeley, a SEBI-registered investment advisor.

But UTI MF did its bit to popularise the scheme. Under the helm of UK Sinha, former head of UTI mutual fund, UTI mutual fund took UTI RBPF to the unorganised sector and tied up with several non-government organisations (NGOs) and banks to get their members to invest in this scheme. For instance, in 2006, more than 43,000 milk producers of Bihar associated with Bihar State Co-operative Milk Producers Federation invested in the scheme. In 2007, more than 5000 women members of Tamil Nadu associated with Self-Help Promotion for Health & Rural Development invested in this fund.

The scheme invests up to 40 percent in equities, with a bias towards large-cap stocks. As per the latest portfolio of December 2020, around 66 percent of the equity portion was invested in large-caps, 22 percent in mid-caps and 12 percent in small-caps. 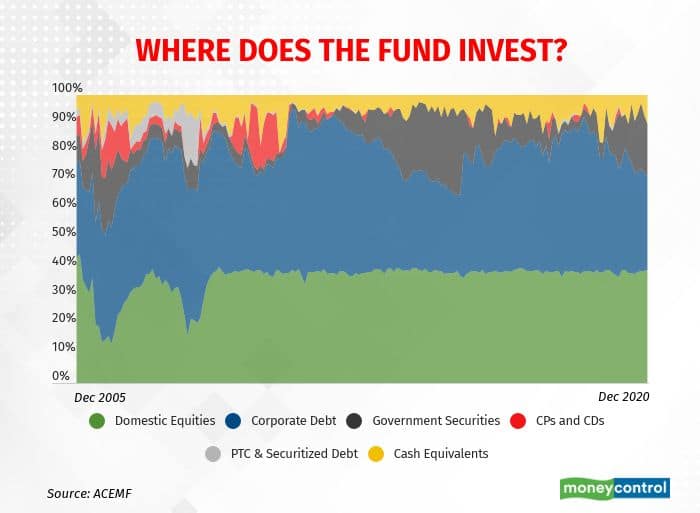 “With the cap of 40 percent on equities acting as a risk mitigation tool and the rest being invested in debt securities, the scheme has a well-diversified portfolio. It is the right blend of debt & equity securities in a portfolio that brings stability,” says Amandeep Chopra, head of fixed income at UTI mutual fund. Amandeep manages the debt portion of UTI RBPF and V Srivatsa looks after the equity part.

The top sectors in the scheme’s portfolio are Banking, Software, Finance, Consumer Non-Durables and Pharmaceuticals. ICICI Bank, Infosys, L&T, SBI, Axis Bank, Vardhman Textiles and Federal Bank have been part of its holdings over the long term.

On the debt side, the fund manages its duration strategy, dynamically by investing across maturities, in corporate bonds, government securities and money market instruments. However, allocations made to relatively lower-rated bonds eying on higher yields had backfired on the fund. The scheme was hurt due to investments made (though marginally) in distressed debt assets issued by DHFL, Idea Cellular and IL&FS.

As a result, UTI RBPF’s performance has been average, especially when compared to that of Franklin India Pension Fund.

Given its high allocation to debt, the fund doesn’t appeal much to young and millennial investors. “UTI RBPF is suitable for investors above, say, 45 years and not for young and/or investors with high risk appetite. Return is likely to be better than PPF considering that it has an allocation to equity,” says P.V. Subramanyam of Subramoney.com.

Moneycontrol recommends investing in regular open-ended mutual fund schemes to plan for goals such as retirement. Just be disciplined and do not touch the corpus till you reach your retirement.
Dhuraivel Gunasekaran
TAGS: #invest #Mutual Funds
first published: Jan 15, 2021 11:20 am