Register Now!“Unlock Credit” with CredAvenue.Pre-Budget discussion on “Solving the enterprise lending and borrowing puzzle in Budget 2022” 29th January at 3pm
you are here: HomeNewsBusinessPersonal Finance

When indices are at a new peak, it’s hard to say whether the market will move higher or lower

Correctly identifying market peaks and bottoms helps in generating superior returns. Be that as it may, investing and exiting at these points have never been easy and, in most cases, almost impossible.

Timing works. But the question is: Can you time your entry and exit?

Why timing may not work for you

Entering at a level when the equity market is close to its bottom and exiting when it is near its peak is easier said than done. These come from hindsight. 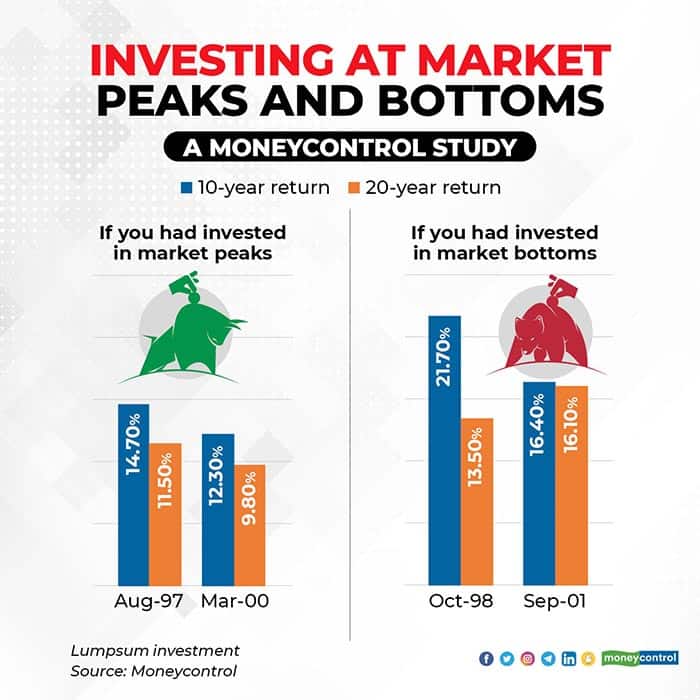 While indices are at a new peak, it’s hard to say whether the market will move higher or lower and the same goes while calling the bottom as well. For example, at present, the Nifty 50 is at around 18,000 levels, whereas, many market experts have been calling peak since 15000 and others are predicting levels of 30000 in the not so distant future.

If you assumed Nifty at 15,000 was a peak, you may have sold and lost out on the gains from the extended rally.

Identifying the peak and bottom while going through the cycle can be very difficult. Our long-term investments ideally need to be aligned with long-term life goals. The focus always has to be on fulfilling goals rather than chasing market levels.

What we do know with some certainty is that long-term investing that spans 10-15-20 years helps in creating wealth by generating inflation-beating returns. From September 1996 to October 2001, an investment in Nifty 50 over any 20-year period would have given 10-12 percent, at least 85 percent of the time. And there is a 50 percent chance that you would have earned more than 12 percent. That’s impressive.

The outcomes of investing in peaks and bottoms are more the outliers and extremes on the expected range scale.

Ultimately, investing is also a lot about emotions. The crash in March 2020 that sent the Nifty 50 to a low of 7,600 in a matter of few weeks is recent enough to revisit emotions. There is panic each time the market crashes.

The COVID-19 market crash was chaotic. Market experts predicted doomsday and no one knew how long the pandemic would last. People lost jobs and also their loved ones. Not many re-entered equity markets, anytime soon. There were few, though, that didn’t panic and stayed invested.

Today, with Nifty50 index close to its peak levels, investors are buying all kinds of stocks. Euphoria is back.

What should investors do at Nifty 18,000 levels?

Selling your investments that are doing well is not going to be an easy decision. And, what are you going to do with the money? Chasing bottoms and running from peaks may work once or twice, but such an approach cannot substitute for systematic investing across market levels.

Your asset allocation, risk appetite and goal horizon must be the deciding factors and not peaks or troughs of indices.
Lisa Barbora is a freelance writer. Views are personal.
Tags: #invest #Market
first published: Nov 5, 2021 11:14 am