However, this data does not fully reflect the deadly impact of the second wave as it gripped the country only towards the end of March 2021 and unleashed mayhem in April and May 2021

The life insurance industry paid out over 97 percent of the COVID-19 death claims it received during financial year 2020-21, the year of the pandemic.

Now, the sector received 21,836 claims between April 2020 and March 2021, of which, 21,304 claims were paid, as per the Insurance Regulatory and Development Authority of India’s (IRDAI) annual report for 2020-21. This included claims settled under the Pradhan Mantri Jeevan Jyoti Bima Yojana (PMJJBY), which offers a life cover of Rs 2 lakh. When the pandemic hit Indian shores, the insurance regulator directed all life and health insurance companies to expedite the claim settlement process across their policies.

Death claims during the first year of the pandemic

Collectively, insurers rejected 175, or 0.8 percent, of COVID-19 death claims, with 357 (1.63 percent) claims pending for settlement as on March 31, 2021. However, this data does not fully reflect the deadly impact of  the second wave as it gripped the country only towards the end of March 2021 and unleashed mayhem in April and May 2021. 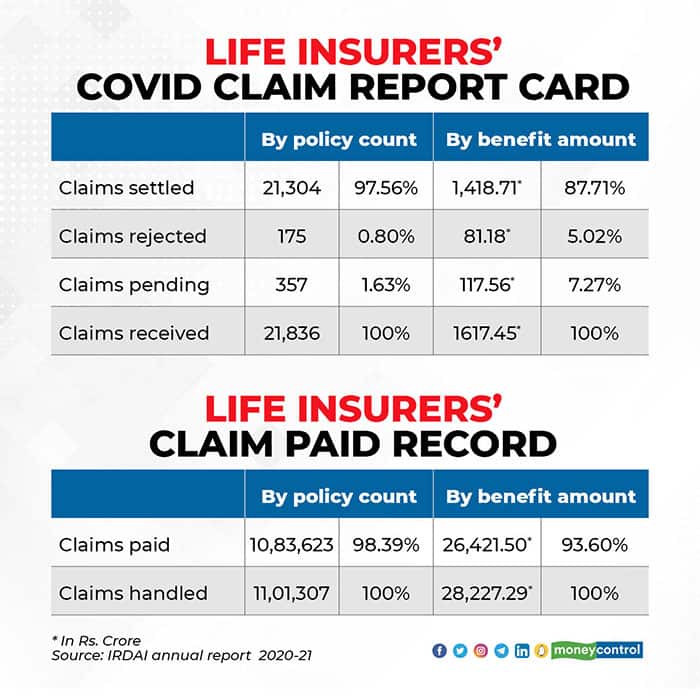 While claim settlement ratio of 97.56 percent seems impressive, the figure is much lower when it comes to benefit amounts settled. Life insurance companies paid out only close to 88 percent of the claims amount logged. Out of the total amount claimed of Rs 1,617.45 crore, life insurers settled Rs 1,418.71 crore. Compared to claims rejected in terms of policy count, the rate of rejection was much higher at 5.02 percent in terms of amount paid.

The gap between claim settled ratios by policy count and benefit amount paid point to rejection of claims under high—value policies. The claim settlement ratio by benefit amount usually tends to be lower due to the rejection of claims that may be fewer in number, but larger in terms of amount.  Since many well-heeled individuals have been choosing to buy large term insurance covers of over Rs 1 crore in the last few years, claims settled by benefit amount has emerged as a more important metric. Term covers do not offer any maturity proceeds but hand out the sum assured to the deceased policyholder’s dependents so that their financial future is secure.

Focus on the benefit amount paid

And, the difference between claims settled in terms of number of policies and benefit amount is not specific to COVID-19, but an annual affair. In 2020-21, too, the difference is stark. While insurance companies settled 98.39 percent of the claim handled during the year, in terms of benefit amount paid, the ratio was much lower at 93.60 percent. Again, the gap is a result of high value policies, particularly in case of early claims, facing tighter scrutiny.

Life insurance policies cannot be called into question three years after they come into force, as mandated by the Insurance Act (Amendment), 2015. However, life insurers do investigate early claims to rule out the possibility of fraud, which results in higher claim rejection as also claim pending ratios.

While claim settlement ratio need not be the only metric you should take into account while choosing an insurer and a product, it is an important parameter. And, if you are buying a pure risk term insurance cover of over Rs 1 crore, make sure you analyse the claim settlement ratio by benefit amount paid too before selecting the life insurer.

Preeti Kulkarni is a financial journalist with over 13 years of experience. Based in Mumbai, she covers the personal finance beat for Moneycontrol. She focusses primarily on insurance, banking, taxation and financial planning
Tags: #insurance #Irdai #Life Insurance
first published: Dec 31, 2021 10:17 am